BEFORE I GO TO SLEEP 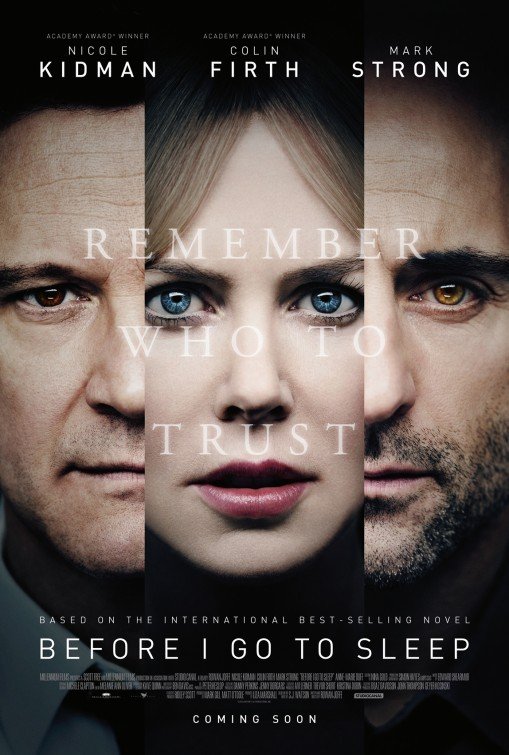 BEFORE I GO TO SLEEP is a suspenseful, riveting thriller. Nicole Kidman plays Christine, a 40-year-old married assault victim with almost total amnesia each morning she wakes. Every day before he goes to work, her husband explains things, but he doesn’t tell her everything right away, like the fact that she was attacked. When she confronts him, he says he has to leave out some things lest she become too distraught. Meanwhile, a handsome neuropsychologist secretly helps Christine recover her memory by making her tape a video diary each day. Eventually, Christine learns more and more things causing her to wonder who she can really trust.

BEFORE I GO TO SLEEP works on several levels. It’s a very suspenseful thriller with an exciting, emotional finish. The last scene is one of the best final scenes all year. The movie also has a strong moral worldview that extols motherhood in a powerful way. However, BEFORE I GO TO SLEEP does have some strong foul language, brief nudity in one shot, intense violence, and some references to adultery. So, extreme caution is advised.

(BB, LL, VV, S, NN, A, MM) Strong moral, pro-family worldview overall extols motherhood and good over evil, but with some adultery references and deceitful behaviors; nine profanities (including five “f” words), one Jesus profanity and four light exclamatory profanities; some strong, intense violence with blood includes images of an attack with blood, man tries to drag woman back into hotel room twice, woman has bloody cuts on face and bare limbs, man slaps woman hard, man grabs distraught woman and gives her a sedative of some kind, people hit with objects during fight, man tries to strangle woman; implied sex between married couple, references to past adultery, psychiatrist almost kisses his married female patient but stops his treatment of her to prevent any further such unethical behavior, married woman wants to end illicit affair, but the man tries to stop her and gets violent; shot of rear female nudity when woman walks around naked in her bedroom and bathroom in a scene that seems a little bit more than just naturalistic nudity; brief alcohol use; no smoking or illegal drugs; and, lying and deceit but somewhat rebuked and talk about how husband left head-injured wife because the memory loss resulting from her injuries began to negatively affect their young son.

BEFORE I GO TO SLEEP is a suspenseful, emotional thriller about a potential murder victim with short-term memory loss who doesn’t know whether to trust her husband or the doctor secretly treating her. Only some gratuitous foul language and a strange shot choice at a crucial moment stop the movie from being a complete success.

The movie opens with 40-year-old Christine waking up next to a stranger who turns out to be her husband, Ben. Ben tells Christine about her short-term memory loss and tells her it was caused by an “accident.”

After Ben goes to work, a neuroscientist named Dr. Nasch calls her and tells her he has had her record a diary on a small video camera. She agreed not to tell Ben about it, because Ben believes they’ve exhausted any chance of a medical cure for Christine’s condition. Christine meets Dr. Nash at the garage to his office, where they continue some treatment methods.

As the days go by, Christine discovers that Ben is keeping more and more things from her. For instance, he hasn’t told her about her close friend, Claire, who he says “moved away.” Nor has he told her that they had a son, who died of meningitis, according to Ben. To top it off, Christine’s ailment was not the result of an accident but the result of a brutal assailant whose face or name Christine can’t remember.

Eventually, Christine learns more and more things that cause her to wonder who she can trust. Even Dr. Nasch and Claire come under suspicion. Will Christine find out the identity of her assailant and discover who she can really trust?

Three things in the movie spoil the experience. First, the movie has some strong foul language, including several “f” words and a strong profanity. Second, one scene contains a shot of Christine’s nude rear end. Finally, at one climactic moment toward the end of the second act, a shot clearly shows that someone has faked a few photographs from the past. The photos look perfectly real in other scenes, but the shot revealing that the photos are fake makes the fakery in the photos seem so obvious that it elicited a derisive laugh at the screening MOVIEGUIDE® attended. Despite this last fumble, the movie quickly recovers and goes on to deliver a really satisfying ending, so this misguided shot ultimately is a minor flaw when all is said and done.

Were it not for the foul language, BEFORE I GO TO SLEEP probably wouldn’t require an extreme caution. It does have some intense but brief violence, however. Also, Christine and her new psychiatrist start to develop feelings for one another, but the psychiatrist is too professional to let that continue. So, he breaks off her treatment with him and tries to send her to another doctor, a female. It’s at that point that Christine starts to uncover the final clues leading to her assailant’s real identity.

All in all, BEFORE I GO TO SLEEP is a suspense thriller that some adults might enjoy. It has a powerful ending that extols motherhood and promotes good over evil, so it also ultimately has a strong moral, pro-family worldview. The uplifting last scene leaves viewers with a really good feeling. It’s one of the best final scenes MOVIEGUIDE® has seen this year.

Kudos to Nicole Kidman (who plays Christine) and the rest of the cast, as well as to Director Rowan Joffe. That said, they should have tried to make their movie PG-13 so they could get a wider audience.

Watch BEFORE I GO TO SLEEP: