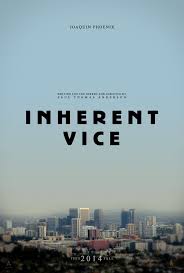 INHERENT VICE is a convoluted story about a pot-smoking hippie detective in Los Angeles, “Doc” Sportello, who investigates three cases linked together involving a rich real estate developer, a missing police informant, a drug cartel, and Doc’s ex-girlfriend. Set in 1970, the movie opens with Doc’s ex-girlfriend, Shasta, coming to his apartment to ask him to help her older boyfriend, Mickey Wolfmann, a billionaire real estate developer. Shasta suspects Mickey’s wife and the wife’s boyfriend are scheming to have Mickey committed to a mental hospital. Doc’s investigation leads to a missing police informant, who tells Doc about a drug cartel linked to a mysterious schooner operating in the local bay.

Based on a novel by Thomas Pynchon, INHERENT VICE is hard to follow, but not impossible. That said, the movie is convoluted, rambling, boring, incoherent, and anticlimactic. It’s hard to take INHERENT VICE seriously. Its left-wing, drug-infused paranoia seems like yesterday’s news. Also, it contains lots of marijuana use, brief cocaine use, explicit nudity, foul language, and two really obscene sex scenes. The combination of bad art, drug abuse and depravity is fatal.

(PaPaPa, RoRoRo, APAPAP, AcapAcap, B, HoHo, FR, LLL, VV, SS, NNN, A, DDD, MM) Very strong pagan worldview with very strong Romantic and implied leftist viewpoint in story about a pot-smoking private detective investigating three related cases in 1970 Los Angeles with a very negative view of traditional American society and American values where police and Mormon FBI agents are involved in corruption, but one police detective has both good and bad qualities and protagonist makes an ironic but insightful reference to the Brother’s Keeper passage in the Book of Genesis in the Bible about Cain and Abel about the police detective who’s somewhat of a loose cannon, plus a scene with homosexual lesbian content and a couple positive references to astrology; about 82 obscenities (including many “f” words) but no profanities, plus some obscene gestures in a few scenes when people give each other the finger; brief strong violence with light blood includes man hit on hand with baseball bat and knocked unconscious, obscured image of murdered man, police detective kicks and body slams protagonist with his knees, police officer deliberately knocks protagonist down for no reason as he passes, man handcuffed to pipe, but he breaks free and hits captor with toilet lid, two men struggle for gun, and man held captive injects captor with PCP concoction intended for him, man shoots a second captor dead and his body is later shown in the darkness with a small pool of blood, threats of violence, and police detective gratuitously breaks down apartment door to talk with private detective; strong sexual content includes a graphic sign of “services” in “massage” establishment that’s really a brothel, two women kiss in front of man at brothel then disappear behind counter as moans are heard while he walks down hallway, implied lesbian oral sex, scene of depicted fornication between clothed man and totally naked woman who erotically massages his inner thigh with her naked foot while talking suggestively to him, implied fornication when “dentist” character pulls down his pants to go into another room where, presumably, a woman awaits him; full female nudity and upper female when woman takes off her clothes in front of man and starts to seduce him in lengthy scene, graphic painting of totally nude woman, and man finds ties with paintings of graphic frontal female nudity, including one of his own ex-girlfriend; alcohol use; extreme drug use includes smoking tobacco and almost constant marijuana smoking, plus a scene where two men indulge in sniffing cocaine as they talk and part of story is about illegal drug cartel; and, corruption, an attempt to frame a man for murder but it doesn’t succeed, brief anti-conservative content in story about corruption, three businessmen are somewhat villainous or involved in some kind of shady dealings and corruption, kidnapping.

INHERENT VICE is the first film version of a novel by critically acclaimed “psychedelic” novelist Thomas Pynchon (THE CRYING OF LOT 49 and GRAVITY’S RAINBOW). It’s a convoluted shaggy dog story about a pot-smoking hippie detective in Los Angeles, Larry “Doc” Sportello, who investigates three cases linked together involving a rich real estate developer, a missing police informant, a drug cartel, a Neo-Nazi group, and Doc’s ex-girlfriend. After watching INHERENT VICE, it is clear why no one has adopted a Pynchon novel before: the books are probably unfilmmable.

Set in 1970 Los Angeles, the story opens with Doc’s scared ex-girlfriend, Shasta, coming to his beach apartment and asking him to help her older boyfriend, a successful real estate developer named Mickey Wolfmann. Shasta suspects Mickey’s wife and the wife’s own boyfriend are scheming to have Mickey committed to a mental hospital. About the same time, a black man asks Doc to help him get back some money owed to him by one of Mickey’s bodyguards, who happens to belong to a Neo-Nazi group of bikers Mickey’s been seeing. Also, the wife of the police informant asks Doc to help her find her missing husband.

After the murder of the bodyguard, Doc encounters his old nemesis at the LAPD, Detective Christian “Bigfoot” Bjornsen, who tells him that Mickey has vanished, along with Shasta. Soon thereafter, Doc finds the police informant, a man named Coy, who tells him that he’s an informant for all the authorities, not just the police, and they won’t let him see his wife and daughter. Coy also tells him that, according to his info, Mickey and Shasta are cavorting on a drug-running schooner used by a drug cartel named the Golden Fang. After being hassled by some FBI agents, Doc starts becoming even more paranoid. He starts investigating the drug cartel as well as the whereabouts of Mickey, but starts asking himself who to believe and what. Things get even more convoluted for Doc (and the viewer).

INHERENT VICE is hard to follow, but not impossible. The arch dialogue, goofy names, slow plot development, and almost constant marijuana haze don’t help. Be that as it may, the story ultimately seems to be a left-wing paranoid fantasy where the most, if not the only, redemptive aspect is the romantic love between Doc and his ex-girlfriend, Shasta, and the love between the police informant and his wife. The story is also rambling, boring, virtually incoherent, and anticlimactic. As such, INHERENT VICE seems to be a weird, more boring combination of DRAGNET, L.A. CONFIDENTIAL, HAROLD & KUMAR GO TO WHITE CASTLE, CHINATOWN, THE BIG LEBOWSKI, and THE MALTESE FALCON. Speaking of THE BIG LEBOWSKI, the Coen Brothers did this kind of thing much better in their movie starring Jeff Bridges and John Goodman.

INHERENT VICE has a drug-fueled pagan worldview mixed with left-wing Romanticism. Besides the scenes of drug abuse, it includes a significant but not overbearing amount of foul language, extreme nudity and two scenes with graphic sexual content. The violence is rather minimal, which is surprising considering that this paranoid comedy is also a modern detective mystery. The movie also contains references to karma and astrology.

It’s hard to take INHERENT VICE seriously. Its left-wing, drug-infused paranoia and deconstruction of American society seems like so much yesterday’s news. It’s apparent lament for the end of the Sixties, which seems implied rather than stated, does not really come across. Ultimately, the filmmakers have forgotten the rule that, in adapting a novel, you have to re-imagine the novel as a captivating three-act movie that builds jeopardy to a nice climax and resolution. Thus, INHERENT VICE fails both as a movie and as an insightful work of art. It also won’t inspire the average moviegoer, much less the media-wise viewer looking for more wholesome movies at his local multiplex.