"Delusions of God, Ghosts and Religion" 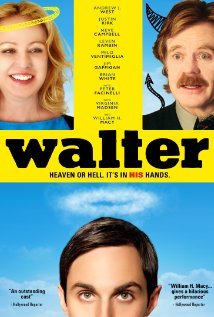 WALTER is a quirky comedy about a ticket-taker at a local movie theater. After his father died when he was young, Walter began to believe himself to be another son of God (but not Jesus), endowed with the responsibility of determining the eternal fate of everyone with whom he comes into contact. Everything falls apart in Walter's world when Greg, a dead family man, begins to haunt Walter, asking Walter to send him to Heaven or Hell. Walter insists he can't judge anyone who’s dead. Eventually, Walter starts piecing together his life. He realizes his problems are related to his father's illness and death.

WALTER holds a certain charm, but the movie remains ambiguous, never explaining the odd behavior of its characters. It’s uncertain whether Walter’s beliefs are real or imagined, until the end. Eventually, the movie seems to indicate Walter’s false religious babble was a psychological problem due to his father’s tragic death. WALTER also has a significant amount of crude content, coming mostly from a fellow employee who verbally abuses the protagonist. Ultimately, media-wise viewers will find WALTER too offensive.

(PaPa, FRFR, C, B, OO, HoHo, LLL, V, SS, MM) Strong, slightly mixed, pagan worldview with a false view of salvation and condemnation, a view of God's judgment not in line with biblical teachings, and character claims to be the son of God but not Jesus, but there is acknowledgment of God and Jesus and of a Heaven and Hell and the movie eventually seems to indicate that the title character was under a psychological delusion brought about by his father’s tragic illness and death, plus occult content where a dead man seems to haunt the protagonist, but it could be seems a delusion, and there’s some homosexual references where protagonist is falsely accused of being homosexual but his mother expresses approval of this “lifestyle”; about 31 profanities and obscenities, vomit shown in bucket, references to feces; character says he died due to suicide; graphic descriptions of sexual acts, implied adultery, crude references to male private parts; no nudity but girl unbuttons blouse to reveal her bra; no alcohol; no smoking or drugs; and, verbal abuse from a coworker and therapist makes fun of his patient.

WALTER is a quirky comedy about a ticket-taker at a local Cineplex who believes himself to be the son of God, endowed with the responsibility of determining the eternal fate of everyone with whom he comes into contact. Much of the plot goes frustratingly unexplained, and there is enough crude content to keep media-wise viewers away.

Walter, a stoic and obsessive-compulsive ticket-taker at a movie theater, believes God spoke to him at his father’s funeral when he was young, granting Walter the privilege of claiming to be the son of God, able to condemn everyone he comes into contact with to Hell or Heaven. Now grown, Walter passes judgment on each person who hands him a ticket as well as the people he casually passes on his daily commute. He informs viewers that he’s not Jesus and that no one knows of the holy “responsibility” that he alone bears.

Walter is in love with the movie concessions girl, Kendall, a blonde who seems willing to give him a chance, yet is put off by Walter’s awkward social behavior. Also, Walter receives a ribbing every day from fellow employee Vince, an unsuccessful actor who spouts disrespectful, crude talk every time he opens his mouth. Finally, Walter faces trouble at home with an over-doting mother, who has an inexplicable habit of making eggs for every meal.

Everything falls apart in Walter’s perfect world when Greg, a dead family man, begins to haunt him, desperate to leave his ghostly existence behind and rest for eternity in Heaven or Hell. Only Walter has the power to free Greg, and Greg says he doesn’t care where he goes, though Heaven is preferable. Walter insists he can’t pronounce judgment on someone who’s already died. He tries to ditch Greg but to no avail. This finally leads Walter to see a therapist, searching for help in how to deal with the situation. Through flashbacks of his father spending time with him as a child, Walter starts to piece together his life. He realizes that everything happening to him is somehow related to his father’s illness and death.

Though WALTER holds a certain quirky charm, the movie remains ambiguous throughout, never explaining the odd behavior of the characters. It’s uncertain whether the plot is real or imagined. Plenty of metaphors seem to be lurking below the surface, but even the scriptwriter and filmmakers don’t appear to understand what they are. This keeps the viewer at a distance, never allowing any emotional investment to occur. The only truly touching scene is when Walter finally breaks down and grieves for his father. This one moment sparks a complete change in his personality. Suddenly, Walter feels like a real boy instead of the wooden shell of a man he was before. At this point, he abandons his role as son of God, leading viewers to believe that it was all psychological from the beginning. It’s all very unnatural and confusing, making this movie a real head-scratcher.

Most of the movie’s lewd offenses come from the character of Vince, who has no trouble letting out a string of obscenities, followed by bragging about his sexual exploits. He mercilessly abuses Walter verbally, even falsely accusing him of being homosexual. What might be most disturbing for people of faith is the way Walter asserts God-like powers and the anti-biblical notion that people can be sent to Heaven or Hell based on a mere first impression. The theology remains very shallow and is even tongue-in-cheek at times, which makes the viewer unsure whether to take it seriously or not. WALTER the movie is unacceptable overall, even though it appears at the end that the protagonist’s religious babble was a psychological problem. Ultimately, media-wise viewers will find WALTER too offensive. Please read our CONTENT section accompanying this review.