PATTERNS OF EVIDENCE: THE MOSES CONTROVERSY 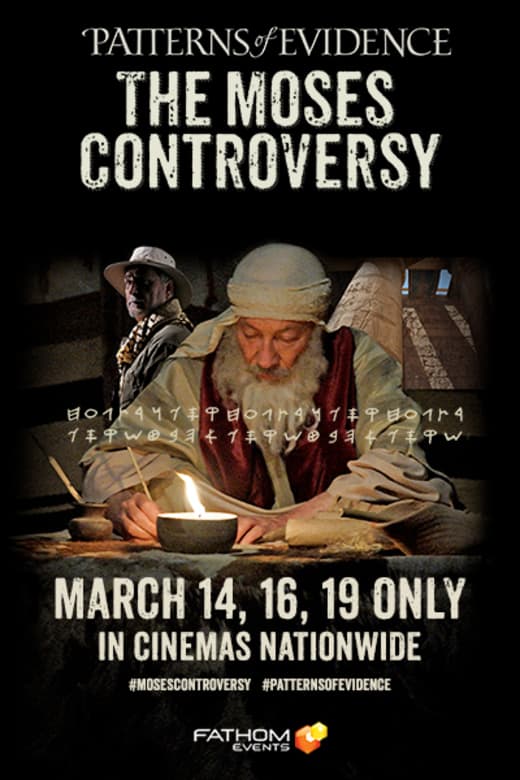 Writer/Director Timothy Mahoney’s new documentary PATTERNS OF EVIDENCE: THE MOSES CONTROVERSY explores an important question of biblical study. Did Moses really write the Torah, the first five books of the Bible? Mainstream scholars believe Moses could not have written the Torah because they claim there wasn’t an alphabetic language available for him. Using archeological, historical and biblical evidence, Mahoney lays out his case that there was, in fact, an alphabetic language available to Moses. As Mahoney travels around the world meeting with various experts and examining ancient writings firsthand, he provides viewers with many beautiful shots of the Middle East.

PATTERNS OF EVIDENCE: THE MOSES CONTROVERSY has a strong Christian worldview, with a grounded, passionate view of the Bible’s inerrancy. Mahoney’s argument and presentation is interesting and engaging, but it contains some logical fallacies that undermine his final conclusion. Also, Mahoney chooses some bizarre shots that are obviously staged and seem to take away from the documentary’s authenticity. That said, Mahoney’s journey in THE MOSES CONTROVERSY to prove the Bible’s truthfulness is an important one that’s worth watching and considering.

(CCC, BBB, Pa, O, H):
Dominant Worldview and Other Worldview Content/Elements:
Very strong Christian, evangelistic, biblical worldview with grounded, passionate belief in the Bible’s inerrancy, with some academic discussion of pagan beliefs, witchcraft and agnosticism
Foul Language:
No foul language
Violence:
No violence
Sex:
No sexual content
Nudity:
No nudity
Alcohol Use:
No alcohol
Smoking and/or Drug Use and Abuse:
No smoking or drug content; and,
Miscellaneous Immorality:
Nothing objectionable.

For seminarians, biblical scholars and other historical, theological, archeological experts, there are outstanding questions about the world’s most famous book, the Bible. Many of these questions seem decided by mainstream scholarly opinion, but actually still have much research and debate occurring around them. One example of this is the Moses controversy. Did Moses actually write the Torah, the first five books of the Bible, as the Bible, Judaism and Christianity claim? Mainstream scholarly opinion is that Moses could not and did not write the Torah. Timothy P. Mahoney and his production challenges that view in a new documentary, PATTERNS OF EVIDENCE: THE MOSES CONTROVERSY.

In his follow-up documentary to PATTERNS OF EVIDENCE: EXODUS, Mahoney travels the world talking to experts and collecting evidence towards a solution to the Moses controversy. Mahoney sets out to answer a simple query: Was there an alphabetic language available for Moses’ use in writing the Torah? As Mahoney describes it, “mainstream” scholars have so totally abandoned the idea that an alphabetic language existed for Israelite use that they’re unwilling to consider evidence to the contrary.

In refuting this modern-day skepticism, Mahoney’s documentary is ultimately a criticism of what people consider “mainstream” scholarship. He argues that the label “mainstream” is really just a way of discounting scholars who disagree with a popularly held opinion. Of course, the belief that we should always follow the most popular opinion, even in a controversial issue, is a logical fallacy called Vox Populi, Argumentum Ad Populum, or the Bandwagon Fallacy.

Mahoney interviews scholars and experts (many who hold typically evangelical views of the Bible’s inerrancy) who believe that there was, in fact, an alphabetic language available at the time. Mahoney uses historical, archeological and biblical evidence to lay out the case for Moses’ use of an early alphabetic script called “Proto-Semitic.”

Mahoney takes his argument one step further, and claims that Proto-Semitic script is an early form of Classical Hebrew, which is generally thought to have been developed two hundred years or more after Moses lived. Thus, his final conclusion is that this early Hebrew language was available to Moses and could have been the script he used to write the Torah. This conclusion, of course, doesn’t prove Moses wrote the Torah. However, it does prove that the idea that Moses could not have written the Torah is false.

In his various travels, Mahoney and his film team capture some stunning shots, especially of the Middle East. Also, his interviews with experts of all sides are interesting and engaging.

However, Mahoney also makes some bizarre choices in his documentary including bad, computer-generated graphics (like God creating the ten commandments); obviously staged shots (like Mahoney sitting in his study, reading a book and taking notes); and odd biblical reenactments. These choices serve to undermine the documentary’s authenticity. Mahoney probably would have been better served by sticking with simple shots of his interviews and travels. These are the movie’s most compelling parts anyway.

Mahoney’s scholarly argument for the Proto-Semitic language as an early form of Hebrew is interesting. He and his panel of experts seem earnest, intelligent and fair-minded in this belief. If Mahoney had paired his content down to this core argument, this second installment of PATTERNS OF EVIDENCE would have been very effective and would be a real challenge to commonly held scholarly opinions on the subject.

However, Mahoney is too broad in his argumentative choices. He ends up including a slew of logical fallacies that undermine his conclusion while being inessential to his core argument. One obvious example is how Mahoney frames the core tension of the documentary. For instance, Mahoney engages a false dilemma by painting his argument as one of only two options: Either Moses wrote the Torah himself in Proto-Semitic script, or the whole Bible is untrustworthy and untrue. Of course, it could be that maybe the dating for Classical Hebrew is wrong. Other fallacies arise in THE MOSES CONTROVERSY as well, including odd, red-herring appeals to pathos, which are unconnected to the academic arguments presented in the documentary.

PATTERNS OF EVIDENCE: THE MOSES CONTROVERSY has, at its heart, an evangelical Christian worldview. Mahoney exemplifies an earnest, grounded belief in the Bible’s inerrancy. The whole documentary exists as a kind of love letter to scholarly conservative Christianity. This world of intelligent, academic discussion that supports the Bible’s truthfulness is important and all-too-often lacking in modern media and discourse. There are some portrayals of agnostic scholars, but Mahoney connects their agnosticism to their unwillingness and stubbornness to even consider conservative scholarly arguments.

Mahoney’s documentary has no questionable content and is, in that way, appropriate for all viewers. However, the arguments are highly academic and probably will be boring or outright inaccessible to young viewers.

For a defense of the Mosaic authorship of the first five books of the Bible, see pages 182 to 185 of MYTH CONCEPTIONS by Tom Snyder (Baker Books, 1995).

Writer: Writer/Director Timothy Mahoney’s new documentary PATTERNS OF EVIDENCE: THE MOSES CONTROVERSY explores an important question of biblical study. Did Moses really write the Torah, the first five books of the Bible? Mainstream scholars believe Moses could not have written the Torah because they claim there wasn’t an alphabetic language available for him. Using archeological, historical, biblical evidence, Mahoney lays out his case that there was, in fact, an alphabetic language available to Moses. As Mahoney travels around the world meeting with various experts, examining ancient writings firsthand, he provides viewers with many beautiful shots of the Middle East.