GODZILLA KING OF THE MONSTERS

"Sometimes You Need a Monster to Save the Day" 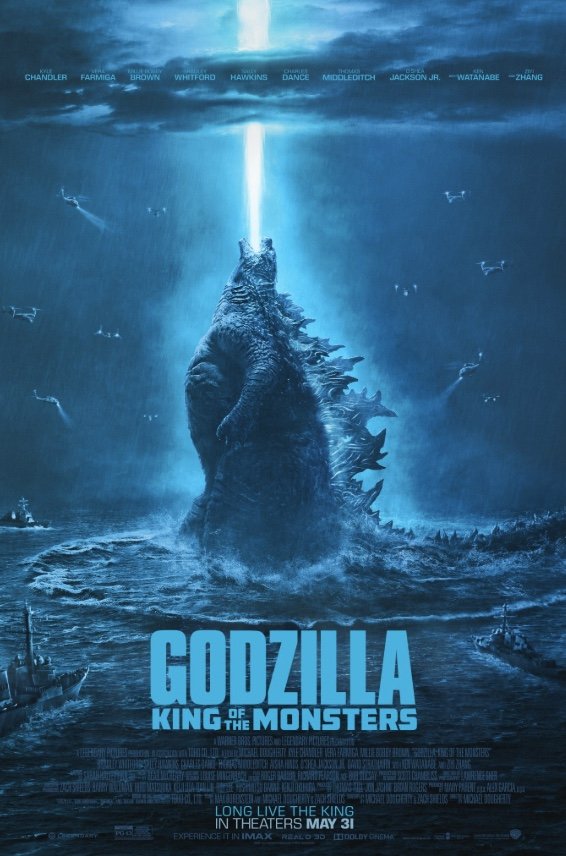 GODZILLA: KING OF THE MONSTERS is a sequel that takes place years after the last Godzilla movie in 2014. Monarch, an organization that finds and tracks giant “titan” monsters like Godzilla, has found 17 titan creatures scattered across the globe. When a scientist, Emma, creates a device that emits frequencies to which the titans respond, an eco-terrorist bent on unleashing the titans on the Earth steals the device to wake up the other titans. The bad guys awaken a three-headed dragon titan, who challenges Godzilla’s reign as the King of Monsters and will ultimately destroy all humans. Can the good guys help Godzilla defeat the evil monster?

GODZILLA: KING OF THE MONSTERS ramps up the monster mayhem and includes some of the best CGI effects and artwork ever. That said, the story is missing emotional effectiveness, and the mythology is sometimes hokey. Though the movie has some strong Biblical, moral themes and even Christian allegories, it’s also strongly pagan and environmentalist. Because of its mixed worldview, strong foul language and monster mayhem, MOVIEGUIDE® advises extreme caution for GODZILLA: KING OF THE MONSTERS.

(PaPa, EE, FR, Ev, BB, CC, P, LLL, VV, S, AA, M):
Dominant Worldview and Other Worldview Content/Elements:
Very mixed worldview, with a strong pagan, environmentalist worldview where creatures are to be worshiped and revered, even above humans by some characters, characters speak of bringing balance to nature and that the natural order requires titans to rule over humans, with fear mongering about poverty, overpopulation and climate change, brief references to Eastern religion, and one or two references to evolution, but mixed with strong moral themes of family and strong Christological references and symbols, with crucifixes, crosses, short prayers, allusions to Godzilla being a savior, almost like a Christ figure (read review above for more explanation), and themes of self-sacrifice and redemption, plus positive portrayals of America’s and other military
Foul Language:
At least 21 obscenities (including multiple “s” words and one “f” word), at least 12 profanities (most of which are strong uses of GD and Jesus), and a child uses the middle finger
Violence:
Strong monster mayhem, with giant titans that are often frightening eating humans and stepping on them, destroying whole towns, and, most often, fighting each other, one creature that has three heads has one of its heads bitten off and many off screen deaths from the monsters, humans are also shot by each other with some blood, and a man has shrapnel lodged in his leg
Sex:
A reference is made to titans reproducing, with a short video of titans mating blurred out
Nudity:
No nudity
Alcohol Use:
It’s referenced that a man became an alcoholic after losing his son
Smoking and/or Drug Use and Abuse:
No smoking or drug use; and,
Miscellaneous Immorality:
Divorce breaks up a family.

GODZILLA: KING OF THE MONSTERS is a sequel to the 2014 GODZILLA movie and ties into a Monster Cinematic Universe that also includes the 2017 movie KONG: SKULL ISLAND. This sequel ramps up the action and monster mayhem in a whole new way, but makes some mistakes while doing so.

The movie introduces some new characters. Mark and Emma Russell are scientists, who lost their son in Godzilla’s attack of San Francisco from the first movie. Though they still have a daughter, Madison (played by Millie Bobby Brown of STRANGER THINGS), the loss of their son pushes Mark into alcoholism and Emma into pursuing dangerous research about the giant Titan monsters.

Five years later, Emma works for Monarch, an old organization that’s studied the giant monsters for many years. For years, Monarch has hidden evidence of the monsters them from the public and, so far, has kept governments from killing the many monsters that exist underground. One of Monarch’s high-ranking scientists, Dr. Ishiro Serizawa (Ken Watanabe), believes the titans are there to bring balance to nature, with Godzilla serving as the king of the monsters and keeping all the other titans in check, as well as keeping humans from destroying themselves. Emma has created a device called the “Orca” that she originally designed with her ex-husband, Mark, but he destroyed it. The “orca” has the ability to transmit sound frequencies that the titans respond to when they hear them.

With the orca, Monarch awakens Mothra, a glowing titan that looks like a giant moth. However, an eco-terrorist named Jonah attacks Monarch, steals the orca and kidnaps Emma and her daughter, Madison. They head for Antarctica to unleash a three-headed dragon titan named Ghidorah. Dr. Ishiro, the Monarch scientist, along with the U.S. military, ask Mark Russell to help them track down the “orca” and find his family.

In Antarctica, the terrorists free Ghidorah. Also, Mark finds out his ex-wife, Emma wasn’t kidnapped, she actually joined the eco-terrorists who want to let the titans rule over the earth completely. However, Ghidorah is far stronger than they anticipated. So, when Godzilla emerges and loses to Ghidorah, they realize that the three headed dragon isn’t even a part of Earth’s natural order and is in fact an alien that will completely exterminate all living creatures on the planet.

Mark, the scientists at Monarch, and the government must find a way to save Godzilla from dying so he can defeat Ghidorah and save humanity. Will Mark be reunited with his daughter Madison? Can Emma redeem herself after making a huge mistake?

One of the strengths of the 2014 GODZILLA movie was that it didn’t show too much of GODZILLA and was able to build tremendous tension leading up to the fight sequences. KING OF MONSTERS is pure monster-mayhem. It fully digs into the mythology and world building teased in the first movie. The movie is a visual wonder, with some of the best CGI this reviewer has ever seen, including stunning cinematography and exciting fight sequences between monsters.

That said, a movie isn’t built on visuals, it’s built on story. So, while KING OF MONSTERS isn’t entirely a failure, it has some giant missteps. The first mistake is that the movie eliminates all mystery surrounding Godzilla. Long periods of exposition about the world of the titans and their origin decreases the tension and jeopardy. In fact, at times Godzilla looks pretty hokey (though one could argue this is in the tradition of every other Godzilla movie). Additionally, the eco-terrorist villain that’s motivated by environmentalist fear-mongering is tiresome, and the fact that Emma joins them becomes very unsettling.

The movie is overtly environmentalist and pagan. Some characters firmly believe that humans need to be in control, others believe that humans need to co-exist with the monsters, and the extreme villains believe that humans need to be subjected to the titans. The end clearly sides with the middle ground that believes Godzilla brings balance to the natural order. With hints of Darwinism, it’s hard not to think of Romans 1:25 while watching KING OF THE MONSTERS, where the Apostle Paul warns of “worshiping the creature rather than the creator.” This sort of paganism, which is largely but not entirely influenced by some references to Eastern religion by the movie’s Japanese scientist, is seeped into the movie’s mythology of the titans.

Despite this, there are multiple, clear Christological symbols in KING OF THE MONSTERS. For example, the Japanese scientist, Dr. Ishido, treats Godzilla like a god, believing him to be “benevolent” and “redemptive.” At one point he even states that Godzilla died to save them, and Godzilla is the only one “who can allow them to co-exist.” He states that things that are “beyond our understanding” give us moments “to have faith.” He also explicitly says that we should have “faith in Godzilla” and that Ghidorra, a satanic looking “alien” that fell from the sky, is a “false god.” There’s no doubt in the movie that Godzilla is the hero, not the villain, and, as odd as it sounds, there’s a spiritual parallel that’s being made between Godzilla and God, and possibly even Jesus.

Other arguments showing that Godzilla is a Christological symbol is that he’s called a King, he dies and goes into the depths of the earth in a sheol like place, he’s resurrected, and he defeats the evil “false God.” Accompanying this redemptive symbolism are more explicit moments where viewers see very prominent Crosses on churches that stand in contrast or opposition to the fiery monster Rodan, as well as moments where people cross themselves, and say, “May God have mercy.” The Christian symbolism is slightly uncomfortable, especially given Godzilla’s early history in movies as a villain, but this new series of Godzilla movies is clearly taking the route that Godzilla is a hero and savior.

In the end, the movie has a very mixed worldview, with prominent paganism, environmentalism, false religion, but there’s also some strong biblical symbolism and moral, redemptive themes about family, self-sacrifice, redemption, and even a message against divorce. Both parents featured in the movie have to redeem themselves and overcome their grief for the sake of their daughter, Madison.

Sadly, along with its mixed worldview, GODZILLA: KING OF THE MONSTERS has some strong foul language, both obscenities and profanities, and intense monster violence. Because of all this, MOVIEGUIDE® advises extreme caution.

Watch GODZILLA KING OF THE MONSTERS: