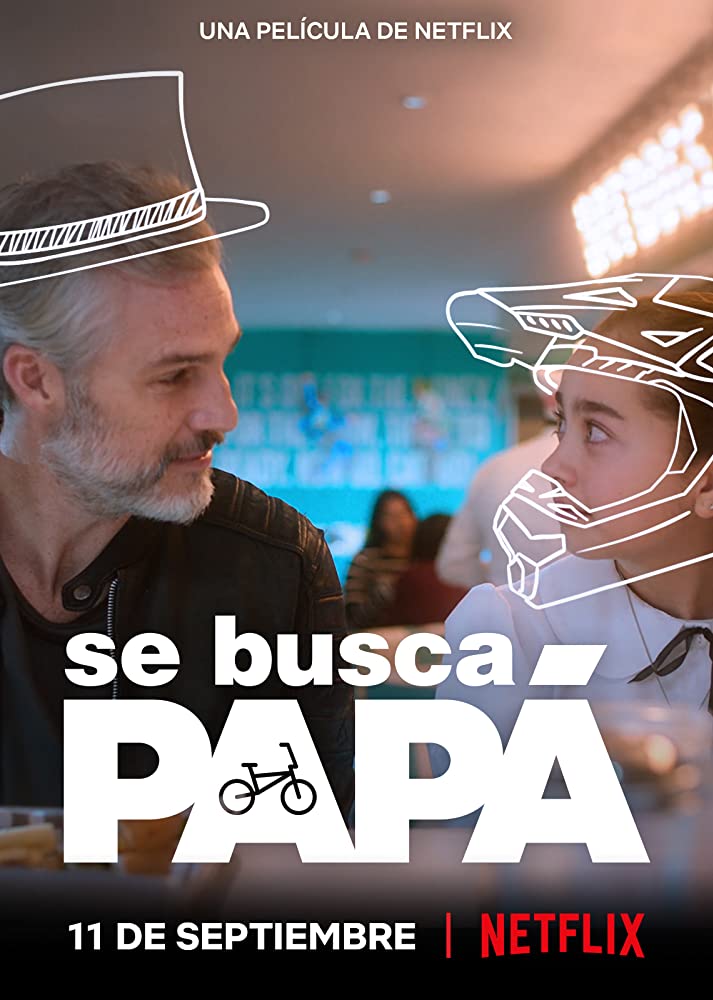 DAD WANTED is a heartfelt drama from Mexico. It follows a 10-year-old girl, Blanca, whose dream is to participate in a BMX racing competition. However, Blanca needs a parent to sign for her. Blanca’s mom strictly forbids her from riding a bike, because her father was killed while riding a bicycle. After scheming with her best friend, Blanca develops a plan to hire an actor to play the role of Blanca’s father. She ends up forming an unlikely bond with the actor she hires. However, it’s only a matter of time before Blanca’s mother learns of her daughter’s dishonesty.

DAD WANTED is blessed by good performances and a heartfelt story. Characters must learn how to forgive the ones they love most. Also, themes of honesty, loyalty and sacrifice are prevalent. Sadly, DAD WANTED is marred by scenes where the actor that Blanca hires to help her drowns his grief in alcohol because his daughter died when he fell asleep driving. DAD WANTED also contains brief foul language, including the accidental use of an “f” word. So, MOVIEGUIDE® advises caution for older children.

(BB, C, L, V, AA, M):
Dominant Worldview and Other Worldview Content/Elements:
Strong moral worldview with redemptive elements where characters learn to forgive one another, there are general themes of sacrifice, love, loyal friendships, and mother and daughter learn to love each other and forgive one another, plus, although there is some deceit, in the end honesty is emphasized
Foul Language:
Six obscenities (including an “f” word that accidentally escapes out of an adult’s mouth, and he tries to correct it but it’s too late), and two light profanities
Violence:
A girl punches a boy in the nose, and some blood is shown, a girl trying to land a BMX trick crashes a few times, two bikers crash during a youth BMX race (not graphic), a few characters talk about loved ones who have died, and one story is about someone killed while riding a bicycle, and another is about a car accident where someone fell asleep at the wheel (stories aren’t graphic, but they are emotional)
Sex:
No sex
Nudity:
No nudity
Alcohol Use:
One character drinks alcohol out of grief and is shown to be drunk or waking up from a hangover several times and in one instance man stumbles out of a bar and is getting ready to drive home drunk but is stopped
Smoking and/or Drug Use and Abuse:
No smoking or drugs; and,
Miscellaneous Immorality:
A girl is disrespectful of her mother but this is viewed in a negative light, and a character spends much of the movie hiding things and lying about things.

DAD WANTED is a heartfelt, slightly family-friendly Mexican movie with plenty of comedy and emotion about a 10-year-old girl who dreams of doing BMX racing.

The movie opens with Blanca, a 10-year-old girl, getting awakened to go to school. Her mother isn’t there to take her, so she has to call a cab. When the taxi comes to pick her up, she gives the driver her backpack, uncovers a hidden bicycle, and races the driver to school. Blanca is a skilled biker, but they arrive at the school at the same time.

Blanca’s mother works as a movie director who works long hours. When she arrives home that day, Blanca is asleep on the couch. She struggles to connect with her daughter but insists on taking her to school. Upset that she can no longer ride her bicycle, Blanca is in a foul mood the next morning.

While at school, Blanca learns about a BMX racing competition. Her best friend urges her to enter. There’s only one problem; she needs her mother’s signature. We learn that after her father died on a bicycle, Blanca’s mother has forbidden biking of any kind.

Wanting to pursue her dream, Blanca goes against her mother’s wishes and tries to find an actor willing to play the role of her father. The actor, named Alberto, struggles with his own loss after his daughter passed away in a car accident. Alberto is skeptical of returning to acting, because he blames his career for his daughter’s death. However, eventually he warms up to the idea of helping Blanca pursue her racing dream.

Alberto and Blanca do everything they can to raise enough money to buy Blanca a bicycle because her mother took away the one she had been riding. Although Alberto’s in debt, he sacrifices his time, money and even some of his home to help Blanca. However, when Blanca’s mom figures out that Blanca has been skipping school and uncovers Alberto and Blanca’s scheme, it looks like Blanca will never see her bike or Alberto again.

DAD WANTED is a Mexican-made movie with good performances and a heartfelt story. Characters must learn how to forgive the ones that they love most, and themes of honesty, loyalty, and sacrifice are prevalent. Although some viewers may find the relationship between Blanca and the actor to be manufactured or even uncomfortable, the movie’s heart is definitely in the right place. Unfortunately, with an unnecessary use of the f-word and depictions of alcohol abuse, MOVIEGUIDE® advises extreme caution for younger audiences.