"Too Politically Correct, Excessive and Too Anti-Christian" 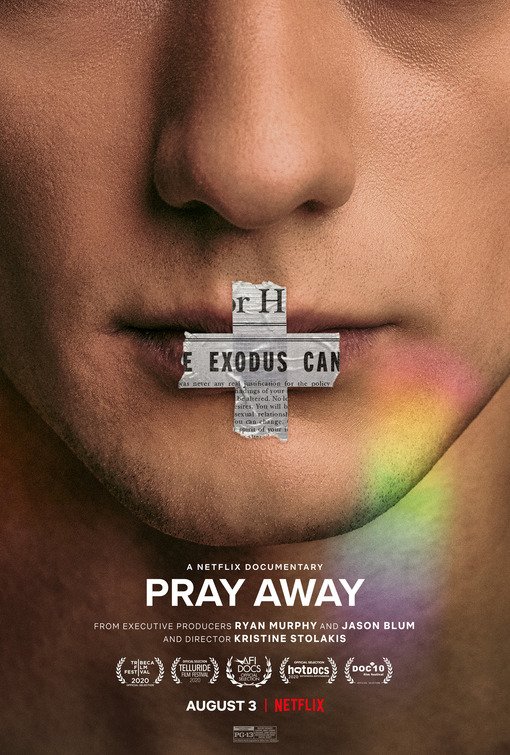 PRAY AWAY is a documentary on Netflix. It follows a variety of people who’ve been negatively impacted by the Christian conversion therapy movement that began in the 1960s. Aside from one man who encountered Jesus Christ and turned away from his perverted lifestyle, Christians are portrayed as the villains who won’t let LGBTQ individuals follow their desires. Multiple male and female homosexuals discuss how much Christian churches and the “Pray the Gay Away” movement has wounded them.

PRAY AWAY is solidly made in the traditional documentary style, but not groundbreaking. It has a good balance of b-roll, archival footage and talking head interviews, with a soundtrack that fits the movie’s tone. However, PRAY AWAY has a strong pagan worldview with a politically correct or leftist defense of homosexuality. There’s only one positive Christian character who clearly says the Bible can show people that the power of Jesus can cleanse them of sin. Also, despite some moral elements, PRAY AWAY contains expressions of strong Anti-Christian, anti-biblical sentiments that stray into false theology. MOVIEGUIDE® finds PRAY AWAY excessive, unacceptable and too politically correct and anti-Christian.

(PaPa, PCPC, HoHoHo, AbAb, FRFR, CC, BB, P, AP, VV, SS, NN, AA, DD, M):
Dominant Worldview and Other Worldview Content/Elements:
Mixed pagan worldview with an ultimately pagan, Romantic and politically correct or leftist defense of homosexuality and Romantic, pagan practices and hedonism where anything goes, with anti-Christian, anti-biblical elements where male and female homosexual characters discuss how much Christian churches and the “Pray the Gay Away” movement has wounded them and ultimately pushed them into the LGBTQ lifestyle where they get to act on their “desires,” some false theology when one Christian pastor says that homosexuality is a gift from God, and there are several instances of the rainbow draped across crosses, mitigated slightly by a Christian man who asserts his life has been radically changed by Jesus Christ, he also asserts that people who love God will obey Him and sites the Bible as his refences for saying so, depicted prayer with “in Jesus’ name.” Several shots of the interiors and exterior of church buildings, multiple crosses shown, depicted prophesying and laying on of hands for prayer. Moral elements of saying sorry, loving one’s family and a character who wants to protect children from sex changes that schools applaud, mixed patriotic and anti-patriotic ideals when citizens assert their right to vote but then get angry when the votes don’t turn out in their favor
Foul Language:
No foul language
Violence:
Female recounts a story of sexual assault and intentionally burning herself with a cigarette butt and with other objects, and references to thoughts of suicide in both adults and children
Sex:
Multiple instances of a lesbian couple kissing on the mouth, and heterosexual couple kisses on the mouth, plus ultimately a strong defense of perversion
Nudity:
A painting shows the backside of a man
Alcohol Use:
Bar cart depicted, character recalls abusing alcohol, reference to showing up at a bar
Smoking and/or Drug Use and Abuse:
Character recalls abusing drugs, and another character mentions she smoked; and,
Miscellaneous Immorality:
People in hindsight admit to lying.

PRAY AWAY is a documentary on Netflix, which follows a variety of people who’ve been negatively impacted by the Christian conversion therapy movement that found its footing in the 1960s and kept full steam ahead for decades. PRAY AWAY is well made, but has a mixed pagan worldview supporting a politically correct, pro-homosexual message and only one positive Christian character who brings forth strong biblically-sound doctrine saying that the power of Jesus can cleanse people from a homosexual lifestyle.

The movie begins with a man named Jeffrey McCall who goes to a grocery store and prays with shoppers about their needs and tells them about his repentance from his alternative lifestyle. He says he lived as a transgender woman, but then was cleansed by Jesus Christ.

Next, several former leaders of the ex-gay movement and the organizations Exodus and the Family Research Council, state their names for the camera and why they believed that God wanted them to help people turn away from the LGBTQ lifestyle and their perverted desires. Many of the leaders that PRAY AWAY centers on include former homosexual individuals like Yvette Cantu Schneider and John Paulk. According to the interviewees, the conversion therapy movement’s is to help people resolve trauma from their past so they can change their homosexual behavior. However, very few of the leaders had formal training. Now, in present day, both Yvette and John regret many of their tactics, but they are still in the public eye spreading their Christian message of running away from homosexual sin.

Filmmakers also show Julie Rogers and her fianceé as they plan for their upcoming nuptials. Julie’s story begins in her youth when she told her mother she was interested in girls. Julie’s mother quickly got her involved with Ricky Chalette, a pastor who tells those in the LGBTQ lifestyle they can live differently. Julie explains that she perceived the church viewed LGBTQ individuals as “gross” and she “wanted to be Jesus’s friend” because He wanted to be with His people in coming to Earth to save humanity from their sins. Yet, like many others, as Julie began advocating for a different lifestyle, she had a change of heart.

Meanwhile, filmmakers juxtapose Jeffrey McCall with the other characters. Jeffery founded the Freedom March, which lets the LGBTQ community know that there’s hope in Jesus Christ and His truth. According to Jeffrey, there is a better way to live and that’s with Jesus. He also says the LGBTQ movement puts too much emphasis on their sexuality as their identity, rather than Jesus as their identity.

Overall, PRAY AWAY ends on a somber note with Julie saying she knows the Christian faith has been a big part of her healing, although the people in the church have wounded her. Meanwhile, filmmakers show that many other of the interviewees have worked on their pursuit to go against conversion therapy in hopes that it won’t negatively impact other people who have homosexual “desires.”

PRAY AWAY is well made but is nothing extraordinary. It has a good balance of b-roll, archival footage and talking head interviews, with a soundtrack that fits the movie’s tone.

PRAY AWAY requires much discernment and a working knowledge of the Gospel. It’s obvious that the anti-gay movement on the part of the Christians has done plenty of harm that cause real and raw pain for which the documentary does a standup job of honoring. However, the documentary sways too far to the politically correct, pagan, Romantic ideals of today, where many people believe everyone can act on their desires and feelings, no matter the consequences and without appealing to God or His Word Written, the Bible.

Different children have different propensities. Some are susceptible to violence; some to drugs, some to stealing, some to greed, and educating every child to mature means leading them out of (e-duco) their propensity to destructive or self-destructive behavior. (In fact, the left would include any propensity to racism, which has not been studied.) So, thousands of psychological studies prove that education works to lead children out of bad or destructive or aberrant propensities. Thus, the very premise of the movie contradicts what even the most liberal elements of the education community believe.

PRAY AWAY also has some mixed patriotic sentiments, some moral elements and expressions of strong Anti-Christian, anti-biblical sentiments that stray into some false theology, as well as anti-scientific denial of the basic elements of education itself. Ultimately, therefore, MOVIEGUIDE® finds PRAY AWAY too politically correct, too Anti-Christian and anti-biblical, “excessive,” and unacceptable. The movie isn’t totally abhorrent perhaps, because there’s at least one person who preaches the benefits of the Gospel of Jesus Christ in the movie.

“Put off your old self, which is being corrupted by its deceitful desires; be made new in the attitude of your minds; and, put on the new self, created to be like God in true righteousness and holiness.” – Ephesians 4:23, 24 (NIV).