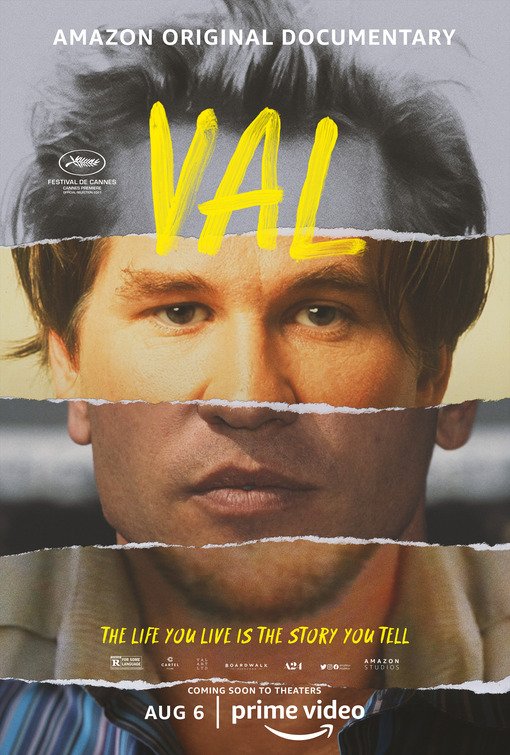 VAL is a deeply intimate autobiographical documentary on Amazon Prime about longtime actor Val Kilmer. The movie is composed of hundreds of self-shot home-movie clips mixed with newly shot footage and narration written by Kilmer but read by his son, Jack. As a young boy, Kilmer lost his favorite brother to a tragic drowning. This death has haunted Kilmer, but the movie includes moments of early triumph when he fell in love with acting doing school plays. The rest of VAL contains footage of him in key acting roles, plus present-day clips of Kilmer attending fan conventions and making personal appearances. Sadly, Kilmer is a follower of Christian Science, a mind-science cult that’s led him to refuse medical treatment.

VAL is interesting to people who love showbiz insider tales and as an intimate look into a former movie star’s life. However, its somber tone and subject matter make for adults, though it just barely crosses the line into an R rating because of five “f” words. VAL also contains two strong profanities plus the aforementioned references to Christian Science. MOVIEGUIDE® advises extreme caution.

(Ro, B, FRFR, LL, V, N, AA, DD, M):
Dominant Worldview and Other Worldview Content/Elements:
Romantic worldview about an actor’s personal and career life, with some moral elements where the actor takes a moral stance and is religious, but the actor also is a follower of the false religious cult of Christian Science where his throat cancer that’s ruined his career could have been cured much more thoroughly and easily if he had just allowed regular doctors and modern medicine to heal him rather than his false cult beliefs that illness is a delusion, plus actor stubbornly tried to insist on doing performances his way to pursue his ideas of artistic truth, and that was often to the detriment of his movies’ entertainment value and made him difficult to work with
Foul Language:
10 obscenities (including five “f” words) and two GD profanities
Violence:
Light violence includes a shootout from the movie HEAT and some quick fisticuffs from BATMAN FOREVER
Sex:
No sex scenes or sexual immorality
Nudity:
Two men jokingly bare their bottoms to a camera and later Val is seen naked from behind in a body of water, with his bottom showing, and he’s also seen lying naked on his side under the Statue of Liberty in a prank, though no public reaction is seen.
Alcohol Use:
Man talks about playing famously debauched rock star Jim Morrison in “The Doors,” and it’s implied from footage that Morrison is drunk, high or both.
Smoking and/or Drug Use and Abuse:
it’s implied from footage that character is drunk, high or both.
Miscellaneous Immorality:
Val’s stubbornness on how to act makes him difficult to work with and also costs him his marriage.

VAL is a deeply intimate autobiographical documentary on Amazon Prime about longtime actor Val Kilmer, composed of hundreds of self-shot home-movie clips mixed with newly shot footage and with narration written by Val but read by his grown son, Jack. VAL is an intriguing yet sad look at a movie star who had it all but has lost much of it due to the ravages of throat cancer, but there is some strong foul language and references to Kilmer’s belief in the false religion of Christian Science.

At the start, Val reveals he’s been filming himself ever since he was given a camera by his father as a young boy. He also reveals that he now has throat cancer and that it has affected his ability to talk so severely that he has to press his fingers on his throat to even speak with a very hoarse, froggy tone of voice.

While these two facts set up a fascinating and in-depth look at his life, Val refuses to acknowledge the most obvious part of his problems. He is a member of Christian Science, a false religion where adherents believe that they are one with the Divine Mind and that sickness is just part of “mortal mind”, but not Divine Mind, and they do not have physical ailments because sickness is not real. As such, he turned down any opportunity to have modern medicine help him, leaving him in his current ravaged state where not only his voice but his extremely handsome good looks are now gone.

VAL affectingly shows Kilmer as a young boy who lost his favorite brother and creative collaborator to a tragic drowning. This death has haunted Kilmer his whole life, but the movie also shows moments of early creative triumph as he falls in love with acting as a teenager in school plays.

One particularly interesting moment comes as a young professional actor when he wins the lead role in a Broadway play called “Slab Boys” and then is relegated to third lead because young but better-known actors Kevin Bacon and Sean Penn are also cast in the play. Kilmer said that taught him to pursue the most interesting role in a film or other production, not necessarily the lead – and that standard of artistic purity causes people to love him or hate him throughout his career.

The rest of VAL alternates between footage of him in key roles throughout his career, including BATMAN FOREVER, HEAT and TOP GUN, and present-day footage of him attending fan conventions and other personal appearances to make money from his autographs. He shows that he bailed his father out of massive tax debts, losing nearly his own entire fortune in the process and necessitating his taking many lower-quality roles and the fan conventions in order to survive.

One other fascinating part of the story is Val’s passion for Mark Twain, which has inspired Kilmer to tour nationally with a one-man show portraying the famed writer and dream of making a biographical movie about him. However, with his voice gone, it’s a sad reality that there’s no way this show can still work out for him.

VAL has a melancholy tone throughout, with an overwhelming sad undertone due to Kilmer realizing that much of his life’s work has come to nothing. It is a touching portrait of a deeply artistic spirit who just can’t seem to bend his vision to fit the world and show business around him.

VAL is most interesting to those who love showbiz insider tales and as an intimate look behind the façade of a former movie star. However, its somber tone and subject matter makes it aimed squarely at adults, even though it just barely crosses the line into an R rating because of about five “f” words. VAL also contains a couple strong profanities as well as the movie’s aforementioned references to Christian Science. MOVIEGUIDE® advises extreme caution.