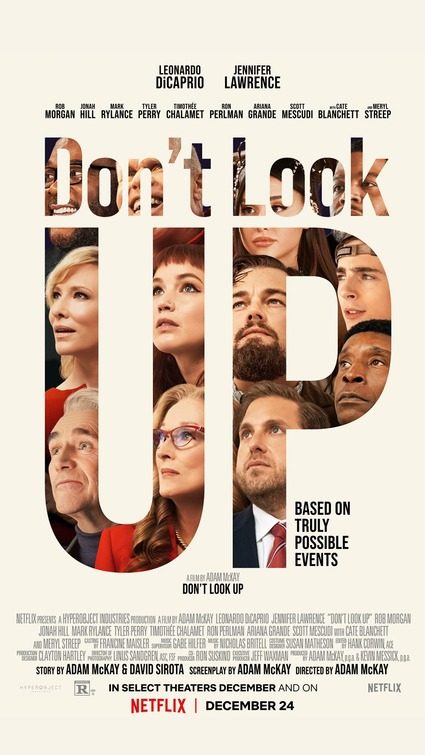 DON’T LOOK UP is a bitter satire about the folly of Humanity when two scientists discover a world-destroying comet is headed toward Earth. Two scientists, Kate and Randall, from Michigan State University go to the White House and report their findings to the media, However, people have a trouble believing their story until the White House checks with Ivy League scientists. The self-absorbed female President comes up with a plan to deflect the comet, but her top donor, a super-rich, narcissistic smartphone inventor, changes her mind. He thinks he has a way to stop the comet and mine its minerals.

The satire in DON’T LOOK UP seems overbroad. Also, though it makes some insightful points about feckless TV journalists, feckless politicians and a celebrity-obsessed culture, much of its satirical anger is directed at conservatives, a Trump-like politician and people who doubt the science behind questionable things like apocalyptic climate change or draconian COVID-19 protocols. DON’T LOOK UP contains abundant “f” words and some strong profanities. In addition, one scene typing up a loose end at the end shows totally naked men and women.

(PaPa, EE, PCPC, APAP, B, AC, CC, FR, LLL, VV, SS, NNN, AA, D, M):
Dominant Worldview and Other Worldview Content/Elements:
Strong, somewhat mixed, satirical, pagan worldview making an allegory about apocalyptic climate change (which has been refuted by top scientists, including the United Nations latest paper on the subject – promoting the idea of some climate change is different from promoting an unproven claim about apocalyptic climate change destroying the world), with some politically correct attacks on conservatives who are skeptical about doomsday environmentalist claims (the movie also creates a caricature of a Trump-like politician and his supporters and a caricature of a gung-ho military man), a negative image of average Americans is sometimes presented overall, but there are some insightful perspectives on people’s obsession with trivial things like social media and gossip about celebrities, on feckless TV journalists, feckless politicians, and on crazy big government bureaucracy, and man cheats on his wife but returns to her after coming to is senses, plus one side character is a young Christian who says two prayers, and there’s one or two other references to Christianity, but the movie also shows multiple images of Buddha, and people praying to Buddha during a crisis
Foul Language:
At least 88 obscenities (including many “f” words), nine strong profanities (mostly GD with a few Jesus profanities) and 19 light profanities such as OMG
Violence:
Some riots and looting, comet is shown destroying buildings, cities and people, a large bird creature grabs a naked woman to eat her
Sex:
Very briefly depicted sex between a man and a woman in a montage of people coping with the end of the world, implied adulterous sex between a married man and an unmarried woman, adulterous passionate kissing
Nudity:
Brief full frontal female and male nudity in a credit scene tying up a loose end, brief upper female nudity in brief sex scene
Alcohol Use:
Alcohol use and brief drunkenness
Smoking and/or Drug Use and Abuse:
Smoking but no drugs; and,
Miscellaneous Immorality:
Lying, woman forgets to rescue her son, people are self-absorbed and narcissistic, man cheats on his wife but eventually returns and reconciles, people are obsessed with trivial matters, people are condescending in a comical way to other people, man is more worried about himself than the rest of the world, snobbery.

DON’T LOOK UP is a bitter satire about the folly of Humanity when two scientists discover a world-destroying comet is headed directly toward Earth, but the American government, the nations of the world and people are too preoccupied with polls, greed, division, celebrity, gossip, ignorance, and their own apathy and skepticism to stop it. Told in a broad comic style, DON’T LOOK UP attacks people’s obsession with trivial matters like the latest gossip about big celebrities, but much of its satirical anger is also directed at conservative Trump-style populist politics and people who doubt the science behind things like apocalyptic climate change or COVID-19 protocols, and the movie has many “f” words, some strong profanities and extreme nudity in one scene, though one minor character is a Christian who prays twice to God but without mentioning Jesus.

The movie opens with a Ph.D. student at Michigan State University, Kate, discovering the comet in the college’s big telescope one late night. The head of the apartment, Dr. Randall Mindy, is excited about the discovery, but when they calculate the comet’s trajectory, they discover it’s headed straight for Earth. They try to tell the self-absorbed President of the United States about the planet killing comet, but she and her loopy son, whom she’s appointed Chief of Staff, don’t believe Kate and Randall because they don’t come from an Ivy League school.

However, the head of the federal government’s asteroid and comet disaster division at NASA, believes them, even though the President was skeptical about his advice too. He suggests they go on a popular news program called The Daily Rip, hosted by a black anchorman and a beautiful blonde anchorwoman, similar to Joe Scarborough and his wife, Mika, on MSNBC, but unmarried. Kate and Randall are totally frustrated because the two hosts are totally clueless about the threat imposed by the comet. The black anchorman is obsessed with gossip more than science, and the woman wants to flirt with Randall, even though he’s married with two sons. Kate loses her cool and starts screaming about the threat of the comet poses, and they lose credibility.

A few days pass, and Kate and Randall get a call from the President. Apparently, she’s gotten confirmation about the comet’s trajectory toward Earth from Ivy League professors. So, she asks Kate and Randall back into the White House. Kate is still angry at the stupidity around her, so they arrest her and force her to agree not to talk about the comet publicly anymore. With Randall’s help, the government begins to develop a plan to change the comet’s trajectory and make it less dangerous by sending nuclear missiles to blow up parts of it. The President appoints a crazy general to lead one of the rockets on a suicide mission. Meanwhile, Randall leaves his wife for the blonde anchorwoman.

The day of the launch, however, the President’s biggest donor, the second richest man in the world and the tech guru behind a feely touchy smartphone, throws a monkey wrench in the plan, for his own benefit. The President decides to go with his plan.

As the comet finally becomes visible in the sky, the people around the world start to panic. What if the new plan doesn’t work?

DON’T LOOK UP is a bitter satire about human stupidity, ignorance, greed, and people’s obsession with trivial matters, like gossip about the behavior, fashion, romances, and marriages of big celebrities. It also satirizes big government bureaucracy and feckless political leaders and media people. However, much of its satirical anger is aimed at conservatives. Toward the end, the female President becomes a Trump-like caricature. She even has a rally where her supporters chant, “Don’t look up,” and wear hats saying, “Don’t look up,” to silence the voices, including Randall’s voice, warning about the comet’s final approach.

DON’T LOOK UP also contains abundant “f” words and some strong profanities. In addition, one scene typing up a loose end at the end shows totally naked men and women.