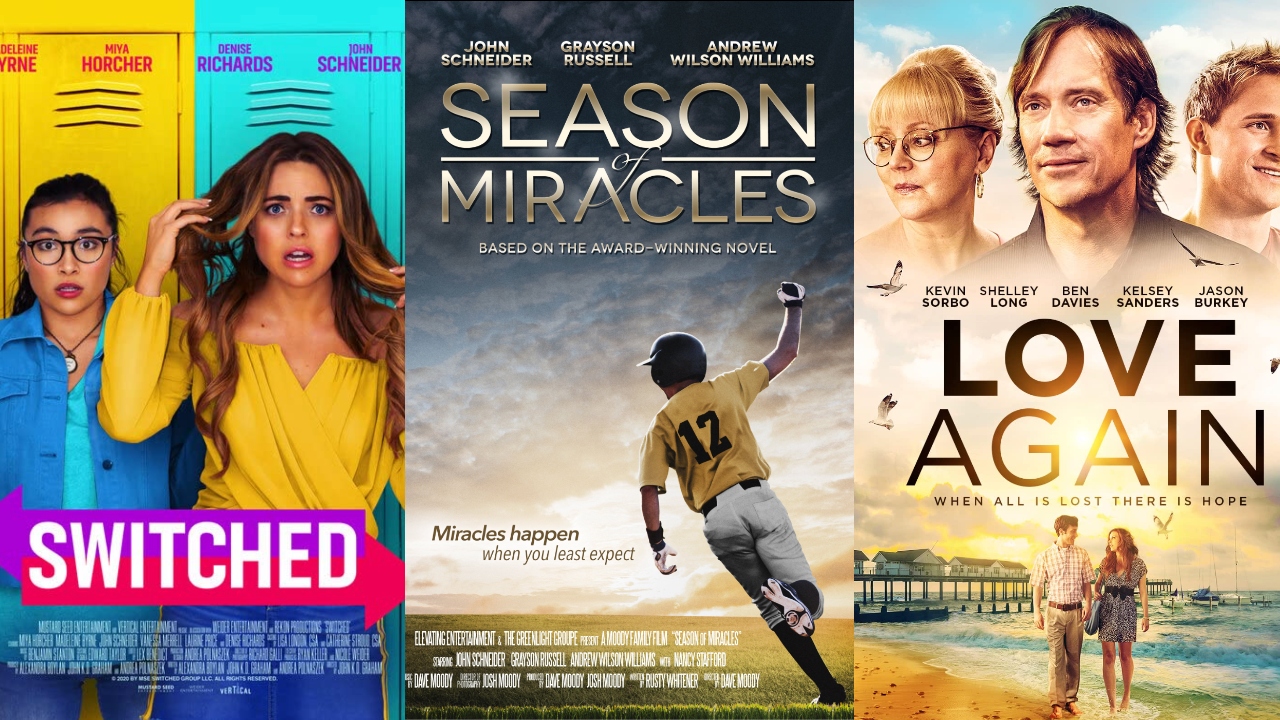 Kairos Prize® finalist and winning scripts continue to wow audiences both on the big and small screens. Now in its 17th year, the Kairos Prize® competition connects inspirational screenplays to industry executives, giving some of the most powerful people in Hollywood access to faith-infused content. The executives continue to be impressed by the scripts and option them, turning the screenplays into feature-length movies for consumers. Initially, the prize was split into two categories, one for beginners and one for more experienced writers. Now, both categories have combined for one overarching competition.

The following is a non-exhaustive list of some of the recent Kairos Prize® winners and finalists that have made it through production:

THE GREATEST INHERITANCE debuted on screening in 2022 and was named as a finalist in the 2018 Kairos Pro Prize® competition, THE GREATEST INHERITANCE is a family comedy on Amazon Prime and Apple TV+. It’s also available on Video on Demand. The story follows four adult siblings, Casey, Carey, George, and Rachel, who reunite for a memorial for their late mother and claim their inheritance. However, getting the inheritance won’t be as easy as they think. Their mother has created some challenges. The challenges lead to clues pointing to the location of their mother’s will, which includes the deed to her estate. They’ll just have to work together to see who gets the greatest inheritance. THE GREATEST INHERITANCE can be rented on Prime Video.

FINDING YOU was the runner up for the Kairos Pro Prize® in 2019 and premiered in theaters in 2021. FINDING YOU is a romantic drama. When Finley doesn’t do well in her violin audition, she decides to visit Ireland for inspiration. On the plane, Finley sits next to Beckett, a Hollywood heartthrob who’s shooting a movie in the same small Irish town she’s visiting. Finley judges Beckett as having a big ego. When she gets to the Bed and Breakfast where she’s staying, she finds Beckett’s also staying there. Meanwhile, Finley finds an old sketchbook where her late brother drew a local cross he found. Finley longs to find the cross and the peace her brother had before he died. FINDING YOU is included with Prime Video.

SWITCHED dropped on streaming during the COVID-19 pandemic of 2020. It initially won the Kairos Pro Prize in 2018, beating out Alexandra Boylan’s other script, THE GREATEST INHERITANCE. SWITCHED is a family-friendly, faith-based comedy available on digital and Video on Demand. Cassandra Evans and Katie Sharp are as different as it gets. Cassandra is an unpopular, musically gifted church girl. Katie is a popular social media influencer with no consideration for others. One day while at school, Katie dumps spoiled milk onto Cassandra and films it. Katie’s video goes viral, which hurts Cassandra. That night Cassandra prays that Katie one day will learn to walk in her shoes. To Cassandra’s surprise, her prayers get answered the next day when she and Katie switch bodies. SWITCHED can be rented from Prime Video.

HAMMERING IT HOME, now called HOME SWEET HOME, was a finalist in 2018 and hit the screens in 2020. HOME SWEET HOME is a faith-based romantic comedy on Pure Flix about a young girl named Victoria who chases after a new guy named Jason in her new home church. Unknown to Victoria, Jason is a devout Christian and healing from a broken relationship. Victoria joins Jason’s volunteer home building ministry in the church, but she’s not sincere about her faith and isn’t upfront about her feelings toward Jason. Just before Jason is about to be open to a relationship with Victoria and arrange a date, another man enters the picture. Now Victoria is stuck between two guys. Victoria has a decision to make, but first she better examine her religious convictions. It can be streamed on Pure Flix and is included with Prime Video.

THE PRAYER BOX won the Kairos Prize® in 2017 and premiered on Pure Flix in 2018. THE PRAYER BOX begins on Sunday. Thirteen-year-old Wesley’s mom, a divorced mother, travels to the hospital to be by the side of her daughter, Mallory, who has cancer. While at church, Wesley sees the troubled pastor throw the prayer requests in the prayer box away. Wesley decides to take the discarded prayer requests and answer them himself, in hopes that God will notice his plea to heal his sister. THE PRAYER BOX is available to stream on Pure Flix and to rent on Prime Video.

ALL SAINTS was a 2013 finalist for the Kairos Prize® and landed in theaters in 2017. ALL SAINTS is a powerful story that’s very heartrending and entertaining. Pastor Michael is on fire for God. When a group of Burmese Karen Anglican refugees show up at his church, his heart goes out to them. Praying about how to feed and take care of them, Michael hears from God that they should turn the beautiful land around the church into a farm. After alienating the big box store trying to buy the land, he convinces the church council to give him until January to make a go of the farm and the church. That is easier said than done. ALL SAINTS can be rented from Prime Video.

MULLY, a finalist for the Kairos Prize®, released in 2017. MULLY is an incredible documentary about Charles Mully, a man who simply said, “Yes, God: Use me!” and ultimately made a profound impact on the children, landscape and climate of Kenya. Starting out as an orphan and making his way up to being a millionaire, Charles Mully had a heart for the children of Kenya. When God told him to take care of the orphans, he sold all of his businesses and possessions, and recruited his family to help him give children on the streets of Nairobi a home. Even though he knew God would provide for him and his calling, Mully faced nothing but challenges along the way. MULLY is on Prime Video.

MATTER OF TIME, now known as LOVE AGAIN, was another Kairos Prize® finalist and dropped in 2014. In A MATTER OF TIME, Nathan returns home after being away for a while and must confront his bitterness towards his best friend Jeremiah, who married his ex-girlfriend. Nathan gets a job as an assistant basketball coach for a girls basketball team, coached by Miranda, Jeremiah’s younger sister. A relationship begins between Nathan and Miranda. However, Nathan’s hurts and failures keep him from letting go of the past. Will Nathan get over his pain and find God’s plan for his life? LOVE AGAIN is available on FreevieTV via Amazon Prime.

SEASON OF MIRACLES is based on the Kairos Prize® winning script by Rusty Whitener.  Set in 1974 in a small Southern town, it tells about an unlikely winning baseball team. The Robins have a history of losing until they discover that Rafer, who is autistic, has a gift for home runs and catching. With Rafer on their team, they start winning games. His dad, however, is very mean who’s constantly abused Rafer. Other boys at school make fun of Rafer. Slowly but surely, God works a miracle that transforms Rafer’s dad and the children. However, just as they’re about to go to the title game, Rafer collapses and is hospitalized. Can they win without Rafer? Will Rafer survive? SEASON OF MIRACLES is available on FreevieTV via Amazon Prime.

Additional scripts that have been optioned and are in production or pre-production include:

GRACE BY NIGHT by Nathan Leon won in 2019 and is now listed as in pre-production on IMDb with Shari Rigby and Antonio Sabato Jr. attached to the cast. According to the log line, GRACE BY NIGHT is about a man takes a job as a crisis hotline responder as a means of coping with a family tragedy.

MINGO ROAD, the 2019 Kairos Pro Prize® winner has been optioned, according to writer Paul Cooper, and is listed as in development on IMDb.

APPOINTMENTS WITH HEAVEN by FINDING YOU’s Brian Baugh, is the true story of a country doctor, his struggles with faith and doubt, and his amazing healing encounters with the hereafter. IMDb also lists this 2018 Kairos Pro Prize finalist as in pre production.

THE PUBLICATION was one of the finalist scripts in 2017 and is about a mysterious publication is revealing secrets in town. One man works to prevent future revelations, while one woman struggles to escape her past.

BURNING AT BOTH ENDS won the 2014 Kairos Pro Prize® and stars Carey Elwes. The story is about small group of dissident survivors who, caught behind enemy lines, must use a radio to broadcast a message of hope to fellow survivors. The movie wrapped production, but has not yet had a wide release.

The 2012 First Runner Up A DOLPHIN IN OUR LAKE, written by David (Nicholas) Hartmann of Mason, OH is currently in preproduction with producers Adrian Carr and Rosemary Marks. After a dolphin appears to his cancer-stricken son in their fresh water lake, a Midwestern farmer in WWII America must find the faith to save his family farm, help his ailing son, and believe in miracles.

The 2011 Grand Prize winner BLUE WATER METAL, written by Justin Eade of New Zealand optioned his script in February 2018 to Cary Solomon and Chuck Konzelman. An amazingly well written script, this riveting tale revolves around seven people, from vastly different backgrounds, stranded on a sinking shipping container in the middle of the ocean… together they must battle the elements, and each other, to survive. Because of the nature of this script, the producers would have to raise a considerable budget… but that is their current goal.

The 2011 winner UNDER THE APPLE TREE, written by Matthew Hill and Landon Johnson of Los Angeles, CA., (incidentally winners of the first annual Chronos Prize) – brings a coming of age story of friendship turning to romance when a staunchly religious boy is forced to work with a true party girl on a college project that sends them on a journey through churches, frats and everything in between. Currently in development with producers Steve Allison and Jonah M. Hirsch, we are awaiting news of production.