The Battle for Values at the Movie Theaters 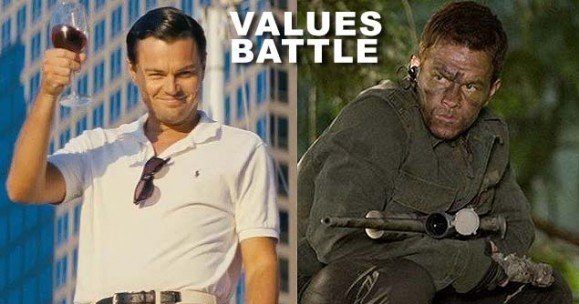 If there’s any type of person I respect, those who have served in the armed forces are right near the top of the list. Even so, I probably couldn’t handle watching LONE SURVIVOR, a violent movie recounting the true story of four Navy SEALs who battle a small Taliban battalion in Afghanistan. Even though, I consider myself the most iron-stomached person I know.

Apparently, however, a huge portion of the American population responded extremely favorably to LONE SURVIVOR, despite its violent tale.

After strong initial screenings, LONE SURVIVOR grossed an incredible $38.5 million in its first weekend of wide release, the second-highest January release in history (2008’s CLOVERFIELD grossed $40 million). With a mere $40 million budget, LONE SURVIVOR is set to become one of the most profitable box-office hits in recent years.

Based on the book by Navy Seal Marcus Luttrell, LONE SURVIVOR is one of the most gut-wrenchingly violent films in recent memory. Its depiction of real-life peril and bloodshed tears at the soul and brings audiences face to face with what many of our servicemen have had to endure. It’s relentless and harrowing, but it’s real and connects with thousands of American families, especially those with servicemen overseas in the world’s hotspots like Afghanistan, the setting of LONE SURVIVOR.

Another “true” story, THE WOLF OF WALL STREET, isn’t nearly as successful at the box office due to its bloated budge of $100 million. Also, according to Box Office Mojo, LONE SURVIVOR has made more than $72 in less than two weeks, while WOLF has taken four weeks of wide release to barely hit $91 million. Usually, a movie has to make two and one-half times its budget to be seen as a true success in North America.

THE WOLF OF WALL STREET explicitly portrays the sexual, hedonistic exploits of Wall Street crook Jordan Belfort and has been the target of media criticism for its nonstop graphic sex scenes and drug use. It’s based on Belfort’s autobiography recounting his wild, lavish, and twisted lifestyle during his years on Wall Street, and in some ways the movie’s portrayal is milder than what the book says actually occurred.

So, what’s the difference?

WALL STREET has only done well on America’s coasts; not one of its top 20 theaters in its opening weekend was located in the heartland. THE LONE SURVIVOR’s strongest states were Texas, Utah, Nevada, Colorado, Georgia, and Virginia. We’ve yet to see what its second weekend will yield, but if it trends as well as expected, it will reach a significantly greater percentage of inner-America’s population and gross past $100 million, easily surpassing WALL STREET’s gross and profits.

What does this red-state/blue-state split between LONE SURVIVOR and THE WOLF OF WALL STREET show?

Finally, it shows that movies like LONE SURVIVOR aren’t really alone, and they’re doing a lot more than surviving.