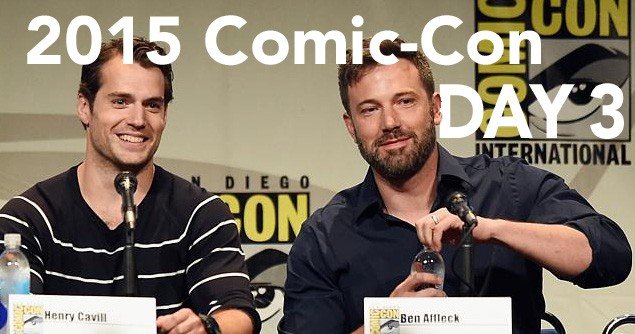 BATMAN V SUPERMAN:  DAWN OF JUSTICE was perhaps the biggest hit for the third day at Comic-Con 2015 Saturday.

As usual, MOVIEGUIDE® reported from Hall H, the biggest venue at the Con, which takes place in Sam Diego.

One of the best stories of the day came from Ben Affleck, who takes over the role of Batman from Christian Bale:

“I had this really weird experience before we started the movie. I was getting my son a Halloween costume, and my son is really into Batman, wisely. We went to a costume store in Los Angeles, and it was pretty empty. I was in the aisle, and I heard this boy. I turn around, and there’s Chris Bale. There he and I were standing in the Batman costume row, and I said, ‘Look, man, you’re the best.’ I also want to say, Christian Bale was buying his son a suit, not just hanging out.”

Warner Bros. blew the audience in Hall H out of the water when they pulled back the curtains and showed the new trailer for BATMAN V SUPERMAN the whole length of the hall, which is huge.

When asked who her female role model was, she said her mother, who showed strength and love throughout her life.

She said her role in BATMAN V SUPERMAN really feels like her big break, and feels “like I have been given such a huge responsibility to show the beautiful, strong side of women. Wonder Woman has all the strength of a superhero, but at the same time she is very sophisticated, loving and has a lot of emotional intelligence. For me, I feel very, very privileged.”

Later in the day, filmmaker Guillermo del Toro (PACIFIC RIM), in talking about the strong female characters in his new gothic horror movie CRIMSON PEAK, added to the theme about strong women, saying, “My wife is my high school sweetheart and is incredibly strong.” This is one reason he likes to include strong representations of woman in his movies, he said.

Later, Joss Whedon (MARVEL’S THE AVENGERS) was asked how he directs women and replied, “By listening to their voices, how they are best at conveying the things they want to convey.”

All these stories make it sound like the theme of the day was respecting women and honoring one’s mother, which sounds pretty good to MOVIEGUIDE®.

That said, the biggest laugh of the day came from Ben Affleck who talked about the moment when he was approached by Director Zack Snyder to take the Batman role. Zack told Ben, “I have this vision for the guy. You’re perfect for it! He’s at the end of his rope, he’s older, he’s like a burn out.”

He just signed to direct the next standalone Batman movie as well as star in the movie as the “caped crusader.” He’s also set to direct another movie starting this November, a version of Dennis LeHane’s Prohibition-era thriller, LIVE BY NIGHT.

All this in addition to playing the Batman in Warner’s new Justice League movies, which start coming out in 2017.