Timeless Messages with a 21st Century Upgrade: Behind the Scenes of the New ANNIE 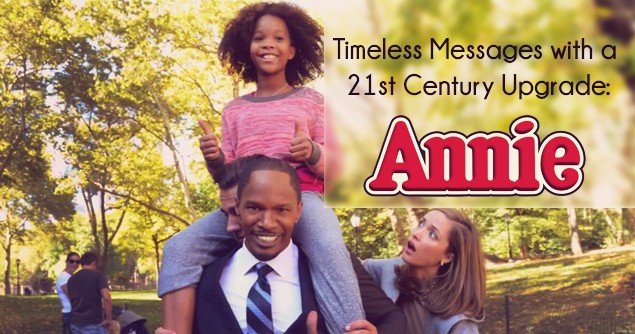 Behind the Scenes of the New ANNIE

The beloved musical ANNIE has been a favorite for many families, but when Sony announced the remake with Jay-Z and Will Smith serving as producers and Will Gluck as the Director, they decided to do it differently this time. They gave a 21st Century upgrade to the beloved story about a 10-year-old orphan girl looking for a family who’s befriended by a billionaire.

That doesn’t mean, however, that the story has been changed beyond all recognition. You don’t mess with a winning formula.

“The message of ANNIE in every iteration is a message of hope, optimism, inspiration,” Director Will Gluck told MOVIEGUIDE® in an exclusive interview. “It’s about finding your place in the world, finding your family and never giving up.”

He added, “That message, along with the bones of the great music, that to me is ANNIE.”

The movie stars acclaimed African American actors Quvenzhane Wallis (of THE BEASTS OF THE SOUTHERN WILD) as Annie and Jamie Foxx as Billionaire Politician William Stacks.

However, Gluck said race was a non-issue when casting, and it wasn’t until after Wallis and Foxx had been chosen that someone pointed it out that they were both African-American.

“It was completely cast ‘race blind,’” Gluck said. “If you notice in the movie, there’s not one mention of race by anybody.”

He continued, “There’s a lot of chatter about [race] right now, but this movie, no matter how good or bad it is, will be watched for many, many years. I believe that after the movie comes out, and people go to see it, the fact that she’s African-American won’t even be 10th on the 10 things they talk about. It’s just Annie. Did we know that people would talk about it? Sure, because she’s not redheaded. At the end of the day, the fact that she’s a red headed girl never really plays into the movie.”

This positive point is one of ANNIE’s strengths, as well as Annie’s ever-cheerful attitude amid difficult circumstances.

“Kid’s don’t know rich or poor or black and white,” Gluck concluded. “Annie is in a bad place in life, has no money, doesn’t know her family, and has a terrible person taking care of her, but it doesn’t get her down. That’s a strong message.”