"Being Together Is the Greatest Treasure" 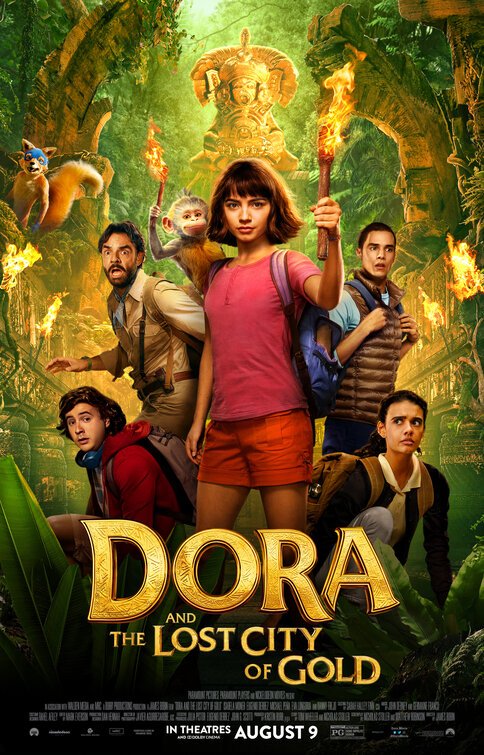 DORA AND THE LOST CITY OF GOLD follows Dora as a teenager who has been sent to the big city to get the full high school experience, but when her parents get lost in the South American jungle, she must go help save them.

Posted by Movieguide on Thursday, August 8, 2019

DORA AND THE LOST CITY OF GOLD follows Dora the Explorer as a teenager sent to the big city to get the high school experience. Dora loves living in the jungle, but her parents think it’s time she had more social interactions. While they go hunting for the Lost City of Gold, they send her to live with her cousin, Diego, in the city. Though totally out of place, Dora does make some friends. However, when she goes on a field trip to a museum, she and her group of friends are kidnapped and taken to the South American jungle to find the Lost City.

DORA AND THE LOST CITY OF GOLD is a cute movie that younger audiences will enjoy, but it does have some Non-Christian elements. Dora is a good character for young girls because she’s positive and likes to learn. Also, she has a good relationship with her parents. However, the movie contains references to multiple gods and an ancient temple to those gods. Finally, in DORA AND THE LOST CITY OF GOLD, Dora makes multiple politically correct comments about “cultural appropriation.”

(BB, C, FR, PC, L, V, N, DD, M):
Dominant Worldview and Other Worldview Content/Elements:
Strong moral worldview about parents and family, one Christian sign of the cross, references to pagan gods and an ancient temple to the gods, and some politically correct elements include a student dresses like leftist Supreme Court Justice Ruth Bader Ginsburg and says she’s her hero, and the title character makes multiple comments about “cultural appropriation,” a false left-wing idea;
Foul Language:
One light profanity, scene about a character going to the bathroom in the woods, passing gas sounds;
Violence:
Jeopardy and action violence where characters are jumping from things; character falls from a distance, man knocked out, character eats a moldy candy;
Sex:
No sexual immorality, but some brief kissing;
Nudity:
Man takes off his clothes and turns into a cartoon;
Alcohol Use:
No alcohol use;
Smoking and/or Drug Use and Abuse:
No smoking, but some flowers make some of the characters hallucinate; and,
Miscellaneous Immorality:
Bad guy lies, and one woman transforms from an old woman to a young woman, and it isn’t explained how that happens.

The beloved character, Dora, from the hit television show DORA THE EXPLORER is now coming to the big screen, in DORA AND THE LOST CITY OF GOLD. Dora loves playing in the jungle with her cousin, Diego, but Diego is moving to Los Angeles. The next day, Diego makes the move, but, before he leaves, the two promise they will have another adventure together one day.

Years later, Dora is now a teenager and runs through the jungle trying to find adventure everywhere. When her parents tell her they’ve discovered the mystery of where the Lost City of Gold is located, she’s ecstatic. They want to go find the lost Incan city, since all their research points to one location. The only catch is, they think Dora should go to Los Angeles instead and socialize with children her age. Saddened, Dora would rather go with her parents than be sent away to high school in Los Angeles.

Once arriving in Los Angeles, Dora is joyous about seeing her cousin, Diego, once more. When it comes to Dora’s first day of school, she’s positive about meeting everyone and being able to learn. However, when she gets there, everyone else seems to be a downer. Dora meets Sammy, the class valedictorian, who is snobby and is unhappy that Dora seems to be intelligent and may be competition for her. Dora also meets Randy, a nerdy type, who has the same interests as Dora but is also interested in Dora.

When Randy, Sammy, Diego, and Dora are on a field trip to the Museum, a docent leads them in to a back room to show them a special exhibit. However, the docent traps them in a large shipping container, puts them to sleep and takes them to the South American jungle. The group is being captured so they can find the Lost City of Gold, but instead, they are able to get away with the help of Alejandro, who says he’s friends with Dora’s parents. The group must figure out the clues to find out where Dora’s parents may be, which also is most likely the location of the Lost City of Gold.

DORA AND THE LOST CITY OF GOLD is an entertaining movie, but it’s hard to determine the movie’s targeted age group for this movie, because the original DORA THE EXPLORER was geared to a much younger age group, and this movie seems more geared toward teenagers, like the tween version that Nickelodeon introduced in 2009. Increasing the confusion is that the movie seems a bit too cheesy for teenagers.

DORA AND THE LOST CITY OF GOLD has a strong moral worldview with a positive portrayal of family and parenthood. The parents are supportive of their daughter and help her foster her creativity and intelligence. Also, the character of Dora is positive, kind and smart. That said, Dora makes a few politically correct comments about “cultural appropriation,” a phony left-wing idea. The movie also mentions multiple gods when it discusses an ancient temple where sacrifices were made in the past. This reference to false religion is done in a lightweight way, however, like the Indiana Jones movies, though the Indiana Jones movies usually have some positive Jewish and Christian elements that refute the false religion references. So, MOVIEGUIDE® advises caution for older children for DORA AND THE LOST CITY OF GOLD.

Watch DORA AND THE LOST CITY OF GOLD: