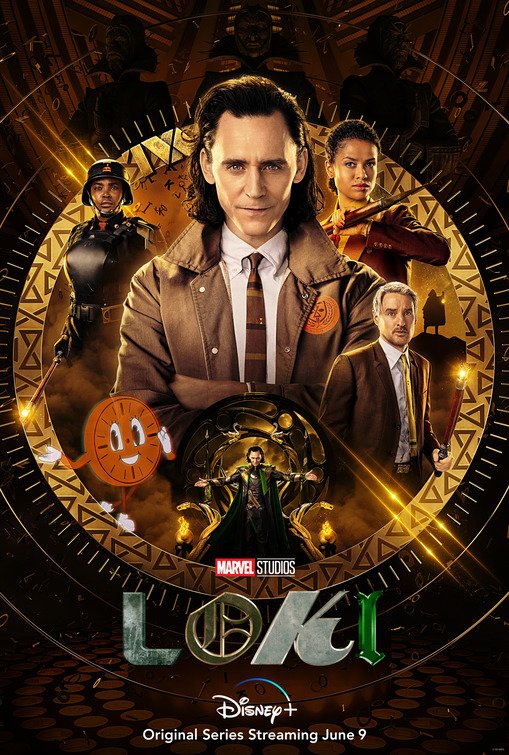 “Lamentis,” the third LOKI episode, is streaming on Disney Plus. At the end of the second episode, Loki follows the Loki Variant, who turns out to be a female, into a time portal. The Loki Variant arrives back at the Time Variance Authority headquarters. Just as she’s about to go through a door to confront the Time Keepers, who run the TVA, Loki appears. They fight, and Loki ends up stealing the Loki Variant’s time travel device. They end up on a populated moon that’s about to crash into a small planet, killing everyone. Loki and the woman, who prefers to be called Sylvie, find out that her device is out of power.

The “Lamentis” episode of LOKI isn’t quite as fun as the first two LOKI episodes. For example, there’s a lot of bickering between Loki and Sylvie. Also, the episode takes a humanist, cynical turn. Loki and Sylvie reveal that not only are they bisexual, but they also see love as not real, only a means to get what they want. The “Lamentis” episode of LOKI isn’t inspiring, uplifting television.

(HH, PCPC, HoHo, L, VV, S, AA, M):
Dominant Worldview and Other Worldview Content/Elements:
Strong cynical, humanist worldview sees love as not real, characters are narcissistic and are only out for themselves, plus politically correct, pro-homosexual content where two main characters admit they are both bisexual
Foul Language:
Four obscenities and three light profanities
Violence:
Strong action violence includes fighting, woman uses an energy weapon to make two or three men disintegrate, and small and large meteors hit objects, buildings and people and cause explosions because a small planet is about to run into a populated moon, killing everyone
Sex:
The two main characters reveal they’re bisexual, but they see love only as a device to get what they want from other people
Nudity:
No nudity
Alcohol Use:
Brief alcohol use and drunkenness
Smoking and/or Drug Use and Abuse:
No smoking or drugs; and,
Miscellaneous Immorality:
Stealing, lying.

In “Lamentis,” the third episode of LOKI, Loki and the female Loki Variant, who calls herself Sylvie, end up on a populated moon that’s about to crash into a small planet, killing everyone. “Lamentis” isn’t as fun as the first two LOKI episodes and takes a humanist, cynical turn with some foul language and politically LGBT content where Loki and Sylvie admit they are bisexual.

At the end of the second episode, Loki follows the Loki Variant, who turns out to be a female, into a time portal. The Loki Variant arrives back at the Time Variance Authority headquarters, where she hypnotizes and interrogates a female officer. She gets the officer to tell her which door leads to inner sanctum of the mysterious Time Keepers, who run the TVA.

However, just as she’s set to open the gold door leading to the Time Keepers, Loki appears, and they start to fight. Loki calls her a Loki, but the woman says she hates that name and tells her she goes by the name of Sylvie. Loki and Sylvie continue to fight. During the fight, Loki steals Sylvie’s time portal device. He operates the device, and they end up on a livable moon called Lamentis-1.

Sylvie becomes very angry. She tells Loki that a planet is about to crash into Lamenti-1, and no one survives. Loki refuses to give her the time portal device. They fight over it, but during the fight, they discover that the device is out of power. So, they must try to find a power source on the moon so they can leave before the planet destroys everyone living on Lamentis-1. A desperate fight for survival ensues.

The “Lamentis” episode of LOKI isn’t quite as fun as the first two LOKI episodes. For example, there’s a lot of bickering between Loki and Sylvie. At one point, Sylvie tells Loki that the Time Keepers are lying to the people working for them. She says all the people working for the Time Keepers are former Variants whose memories have been erased. Also, in the middle of the episode, Sylvie interrogates Loki about his past. At one point, she asks him if he’s had dalliances with both “princesses” or “princes.” “A bit of both,” he replies. “I suspect the same as you,” he adds, which she admits. At another point in the episode, both Loki and Sylvie agree that love is a weapon for them to wield against other people to get what they want because, in the end, it isn’t real and often brings pain.

All in all, therefore, LOKI takes a humanist and even cynical turn in the “Lamentis” episode. Some are praising the episode for following the stories in the Marvel comic books, where Loki is bisexual. MOVIEGUIDE® asks, however, why is this a positive thing, since the Loki character is actually an immoral, narcissistic person? Hopefully, future episodes of LOKI will play down this politically correct, abhorrent LGBT theme. Even better, why not have Loki see the light, become a Born Again Christian and marry a woman and have children?