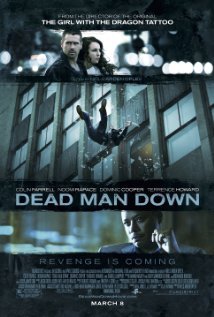 DEAD MAN DOWN stars Colin Farrell as Victor, a man out for revenge against the two gangs who killed his wife and daughter and left him for dead. Victor’s plans hit a snag when a woman named Beatrice sees him fight and kill one gang member who tracks him down. The left side of Beatrice’s face has been scarred by a drunk driver who got off with a light sentence. She blackmails Victor into agreeing to kill the drunk driver. Neither Victor nor Beatrice, however, have counted on the emotions that arise when they learn about the details of one another’s tragic pasts. What will happen next?

DEAD MAN DOWN is an absorbing, exciting thriller. It also has some surprisingly redemptive, uplifting and touching moments and many nice subtle details. The whole cast and crew deserve kudos. However, the movie’s strong redemptive, moral premise is marred by many strong obscenities, strong violence and a brief lewd moment. Apparently, you can’t make a gritty, urban thriller like this without a lot of “f” words. So, MOVIEGUIDE® advises extreme caution for DEAD MAN DOWN.

(CC, BB, Pa, H, Ro, LLL, VVV, S, N, A, DD, MM) Strong Christian, redemptive worldview with a strong redemptive, moral premise that’s archetypal, somewhat metaphorical, and even symbolic, set in a Non-Christian or Post-Christian world with mixed pagan, humanist, Romantic elements; 77 obscenities (including many “f” words) and two light profanities; very strong violence but not extremely bloody includes several point blank shootings, two extended gun battles, chase scene, man beats up another man, as part of a revenge plot protagonist has tied up in a secluded sewer outlet a gangster who helped kill his wife and protagonist eventually kills him, truck crashes through door of fancy house, explosion with napalm sets bad guys on fire, during one fight to the death a bad guy is hanged by a fire hose, and woman blackmails protagonist to murder drunk driver who scarred her face [spoiler alert] but protagonist only pretends to do it; gangster bust in on another gangster who’s in bed with a prostitute but nothing explicit really shown; upper male nudity; alcohol use; smoking and brief shot of a pile of cocaine in a room where some men are making the cocaine for selling it later; and, revenge plot but revenge is eventually rebuked, blackmail but that’s rebuked, family man joins gangsters and takes part in their activities to get revenge on them for killing his wife and child, kidnapping, and a rabbit’s foot is used for luck and becomes a motif in the movie.

DEAD MAN DOWN is a well written, directed and acted thriller with a redemptive worldview and premise. However, it has lots of strong foul language, much violence, and brief lewd content in one scene, so extreme caution is necessary.

The movie opens with a young thug named Darcy holding his newborn baby while talking to his friend, Victor, the baby’s godfather. Darcy, who has a crucifix tattooed on his neck, tells Victor that his wife convinced him that people need to be connected to one another in this life. His wife also told Darcy that people need to build something to make life meaningful. So, they had a baby together.

What Darcy doesn’t know is that Victor is on a mission of revenge against their new crime boss, a black man named Alphonse. Victor and his wife defied Alphonse’s gang several years before after some gang members accidentally killed their daughter. They were going to testify against the gang when Alphonse hired an Albanian gang to kill them. The Albanians didn’t stick around to confirm Victor’s death, so as far as they and Alphonse know, Victor is dead. Of course, Victor isn’t this man’s real name, and Alphonse and his inner circle never met him or his wife.

As part of his revenge, Victor became friends with Darcy, and they joined Alphonse’s gang. Victor has been sending mysterious notes and parts of a photo of he and his family to the Albanian leader and Alphonse. Alphonse asked one of his men to find out who’s been sending these messages, and Victor has had to kill the man.

Victor’s plans for revenge hit a snag when he meets a woman, Beatrice, who lives across the street from his apartment. The left side of Beatrice’s face was scarred when a drug driver hit her car. The driver got off with a light sentence. Victor thinks he’s going on a date with Beatrice, but she informs him that she saw him kill Alphonse’s henchman in Victor’s apartment. She threatens to go to the police if Victor doesn’t agree to murder the drunk driver who ruined her life. Victor agrees.

Despite the blackmail attempt, however, Victor and Beatrice find themselves caring about one another as they learn more about each other. This leads to a “Gift of the Magi” plot twist that becomes surprisingly profound as it goes along.

[Possible spoilers follow] Events come to a head when Alphonse and Victor’s friend Darcy find out the truth. Victor’s plans for revenge against Alphonse and the Albanians go kaput. Especially when Darcy and Alphonse take Beatrice prisoner. Can Victor save Beatrice’s life? What about his own life? Finally, who will Darcy side with when Victor has to confront Alphonse and his gang?

Unlike previous movies actor Colin Farrell has done, the writing, dialogue and characters draw the viewer into DEAD MAN DOWN. The movie’s directed by the man who did the original, superior Swedish version of THE GIRL WITH THE DRAGON TATTOO. It’s also written and produced by one of the writers for the TV series FRINGE, which often had a lot of interesting, redemptive content in it.

For what may be considered a B thriller, the acting in DEAD MAN DOWN is excellent. Part of that is due, of course, to the writing and the directing, but the whole cast deserves kudos. As Victor, Colin Farrell has never been better. As Beatrice, Noomi Rapace, the title character in the Swedish GIRL WITH THE DRAGON TATTOO trilogy, shows she wasn’t a fluke. Terrence Howard gives another fine performance as Alphonse. Dominic Cooper (THE DEVIL’S DOUBLE), as Darcy, demonstrates for at least the second time an ability to disappear into a role and make it his own. Cooper could get an Oscar nomination one day, or even win one, if he keeps this up.

The ending is particularly satisfying in DEAD MAN DOWN. Despite the revenge motif, the dramatic, action-packed ending resolves everything in a redemptive, uplifting manner. The opening scene with the protagonist’s friend holding his newborn baby foreshadows and sets the stage for the ending in a very nice way. The movie also includes some brief flashbacks of Victor with his dead wife and child that humanizes the protagonist and increases the viewer’s identification with him. Because of her scarred face, some local children have written “monster” on Beatrice’s apartment door. Later, in another scene, the children throw some things at her, and she falls. This is another detail that captures the viewer’s imagination, as does the villain’s clear emotional distress about the mystery man who’s taunting him.

Overall, therefore, DEAD MAN DOWN has a positive, ultimately uplifting worldview with a lot of details that enrich the worldview and the story. However, it’s set in a gritty, violent, urban Non-Christian, or Post-Christian, world with many strong obscenities. Apparently, you can’t make an urban crime thriller in America like this without a liberal use of the “f” word. Thus, MOVIEGUIDE® advises extreme caution for DEAD MAN DOWN. The good news is that we didn’t hear Jesus Christ’s name being taken in vain, which may be a first for an R rated movie like this one.