MOM AND DAD SAVE THE WORLD 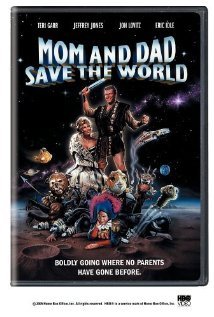 When Emperor Tod Spengo of the Planet Spengo sets his sights on earthling Marge Nelson in MOM AND DAD SAVE THE WORLD, Marge and her indifferent husband are catapulted into an exciting intergalactic adventure. Because of Marge and Dick's love for each other, they are able, ultimately, to "save the world." The film deserves kudos in its lack of objectionable elements such as obscenity and immorality, but the monster-like creatures and slapstick violence might frighten young children.

(B, S, V) The love triumphs over adversity theme is marred somewhat by rather brief women's costumes (but in keeping with film motif); slight sexual innuendo; and, some slapstick violence.

As MOM AND DAD SAVE THE WORLD opens, Marge (Teri Garr) and Dick Nelson of Woodland Hills, California, make plans to celebrate their anniversary. However, their marriage has disintegrated into boredom. Meanwhile, on Spengo, a planet light-years away, the Emperor Tod finalizes plans to destroy the Earth. The despot is enraged that no one on Earth has responded to his radio transmissions. Tod takes one last look at the Earth and freezes on Marge. It’s love at first sight, so he orders his subordinates: “Bring her to me!” Thus, Marge and Dick are zapped across the galaxies. Marge demonstrates unexpected resources once she arrives on Spengo. Both Marge and Dick have hilarious adventures on Spengo and meet many of its inhabitants, most of whom are easily fooled. Once Marge and Dick realize this truth, they are able to foil Spengo’s plan of destroying the Earth.

MOM AND DAD SAVE THE WORLD, while not an outstanding movie, exhibits humor and imagination, and will entertain its viewers. The film deserves kudos for its lack of obscenity and immorality. Furthermore, the love that Marge and Dick have for each other helps them overcome the obstacles and challenges thrust upon them.

Rent or Buy MOM AND DAD SAVE THE WORLD: