STEVE JOBS: THE MAN IN THE MACHINE

"The Lesser Known Side of Steve Jobs" 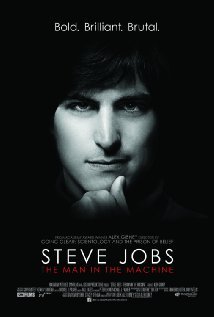 STEVE JOBS: THE MAN IN THE MACHINE is a documentary from Oscar-winning filmmaker Alex Gibney. The movie looks at the Apple founder’s legacy as a near mythical, worldwide hero and cultural icon, while also being a manipulator and bully to those close to him. The movie addresses his relationships, worldview, legal troubles, and eventual death and legacy.

STEVE JOBS: THE MAN IN THE MACHINE is a fascinating, compelling documentary that asks insightful questions of viewers. The movie is strongest when it focuses on Jobs’ relationship with machines, or more specifically on how machines are the future of human expression. If one thing is clear, it’s that capitalism without biblical ethics doesn’t work out well for employees, though government involvement in the free market isn’t much better. While not directly trying to turn Steve Jobs into a bad guy, the movie successfully shows he wasn’t a man of great integrity either. STEVE JOBS: THE MAN IN THE MACHINE is a mixed bag that has some good questions, silly rabbit trails at times, and intriguing history, but also some foul language. Strong caution is advised.

(HH, PaPa, FRFR, Ab, B, Cap, LL, V, S, NN, AA, M) Strong humanist worldview about man’s ambitions with many references and discussions of Eastern religions, including Buddhism and Hinduism, Mother Theresa is mentioned in that how Jobs doesn’t share her values, though the outcome of these worldviews isn’t reflected positively or attractively, plus some capitalistic ideas of innovation, ingenuity and free enterprise as unique to America in today’s world is promoted, though the movie argues Apple has become corrupt in its dealings, a reasonable argument; seven obscenities (including a few “f” words) and three light profanities; no depicted violence, but a factory fire and suicide is referenced; unwed pregnancy; a picture of a half-naked woman on a magazine cover gets brief screen time, upper male nudity; reference to drinking and drunkenness; no smoking or drug references; and, greed, stealing, manipulation, man abandoning his family, but all shown in negative light.

STEVE JOBS: THE MAN IN THE MACHINE is a documentary from Academy Award winning filmmaker Alex Gibney that looks at the Apple founder’s legacy as a near mythical worldwide hero and cultural icon, while also being a manipulator and bully to those close to him. Documentarian Gibney is no stranger to taking on giants in his movies, as he recently caused a stir with GOING CLEAR, a movie about the scandals inside the cult of Scientology.

THE MAN IN THE MACHINE begins with footage of people mourning the late passing of Steve Jobs in 2011. Gibney narrates and poses a question as to why, or how a man like Jobs, a businessman and tech innovator, became a superstar so beloved by millions. Who was this larger than life man that refused to be boxed or be conformed to anything that didn’t fancy his vision?

Instead of following a timeline, the movie flows fairly seamlessly backward and forward in time, exploring different aspects of Jobs’ life, as it tries to crack this enigma of a man. The movie begins with his interactions with machines as a young man and his brief adventures with his friend Steve Wozniak, the real computer engineer behind many of Steve’s accomplishments. It quickly establishes Steve’s lack of integrity as he goes behind Wozniak’s back and rips him off. Bold and unrelenting, Jobs steamrolled his vision for putting a personal computer in every household. Taking on major tech companies like IBM, Jobs was the countercultural rebel, most visibly seen when the Apple computer company released its George Orwell inspired ad “1984,” coining Apple’s “Think Different” slogan.

Along with some ups and downs at Apple, including being forced out for a period of time, Jobs had a messy personal life, impregnating his girlfriend Chrisann and then abandoning her. At times, Jobs would be in so much denial that those around him believed he had “reality distortion.” While this made him visionary and genius in many respects at Apple, it also strained and ruined many relationships in his life.

The movie also addresses at great length Steve’s worldview, and tries to figure out what his values truly were. As a practicing Zen Buddhist, Eastern religion had a great influence on him, especially in his radical diet. Halfway, the movie takes a darker turn, showing Apple’s intensity as a worldwide super power and their supposed bullying of journalists and their disregard of people, especially in factories. By the end, Jobs is a more conflicted, complex figure. Gibney uses this to ask the viewer to reflect within themselves and ask about the nature of their relationship with the man, Steve Jobs, and the machines he created that we so cherish.

STEVE JOBS: THE MAN IN THE MACHINE is a fascinating, compelling documentary that asks fantastic questions of the viewer. The movie is strongest when it focuses on Jobs’ relationship with machines, or more specifically, on how machines are the future of human expression. These big ideas are almost too vast for one movie, but Gibney can’t help but try to tackle them. Among other intriguing topics is how Steve, who once relished being the underdog in a David and Goliath story ultimately became the giant that preyed on small business and would use any legal loophole available for his own benefit, both personally and corporately. The movie also reveals some unsung heroes behind Apple’s success.

The movie definitely falters when it tries to further vilify Jobs via poor working conditions of Chinese electronic factories that Apple uses as a contract manufacturer. After building such a strong case for his maniacal nature, the filmmakers start grasping at straws to back up their claims. If one thing is clear, it’s that capitalism without biblical ethics and morals doesn’t work out well for employees, though government involvement in the free market isn’t much better. STEVE JOBS: THE MAN IN THE MACHINE is a mixed bag. While not directly trying to turn Steve Jobs into a bad guy, the movie successfully shows that he wasn’t a man of great integrity, something that’s also apparent when reading his biography. The movie celebrates certain spirits of innovation, ingenuity and capitalism that made Apple what it is, while also criticizing these very things as the company became a worldwide corporation. That said, the movie rightly criticizes Jobs’ mistreatment of people, and ironically and logically shows his poor values as a result of his skewed worldview. Ultimately, this fascinating look at Steve Jobs is simultaneously troubling and inspiring. A strong or extreme caution is advised for some foul language and a nude photo.