RIDLEY JONES: Episode 1.1: Ready or Not, Here I Come and Some Like It Hot 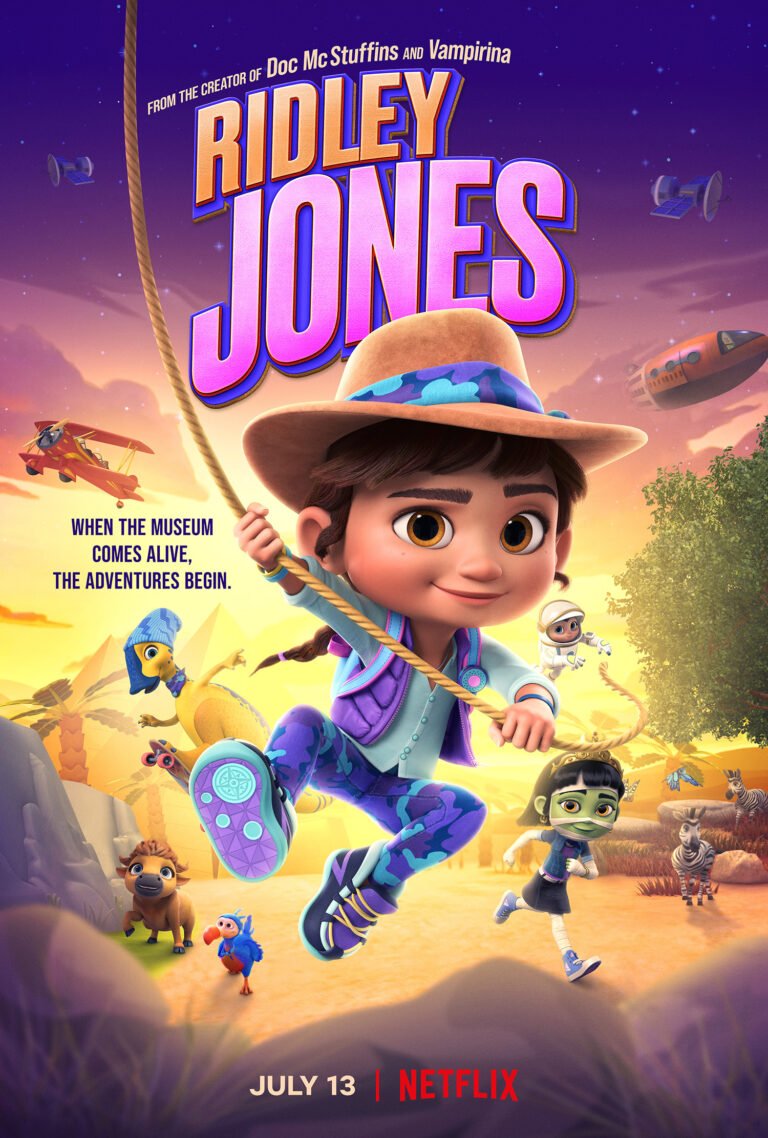 RIDLEY JONES is an animated TV series streaming on Netflix. It follows the fantastic adventures of a young girl who lives in a museum that comes to life at night. Ridley hopes to take over the family tradition of her mother and grandmother. Along with her friends from the exhibits, she completes helps around the museum. The first half-hour episode consists of two 14-minute shorts, one where Ridley stops a stampede of caribou from one exhibit and one where Ridley and her friends must escape a rockslide in another exhibit.

RIDLEY JONES is exciting to watch. Also, it teaches important lessons for young children such as learning responsibility, asking for help, rescuing others in danger, making wise decisions, and trusting family and friends. Despite these merits, the program also teaches some Romantic, politically correct ideas. For example, such merits, the first episode desensitizes children by sometimes pushing a homosexual agenda. For example, it showcases a nonbinary character who stars in every episode, and one character has two homosexual fathers that appear in multiple episodes. MOVIEGUIDE® therefore advises extreme caution for RIDLEY JONES.

(PaPa, B, Ro, PCPC, Fe, Ho, O, V, M):
Dominant Worldview and Other Worldview Content/Elements:
Strong mixed pagan worldview with some moral elements and moral lessons such as learning responsibility, listening to your parents and grandparents, helping others, and making wise decisions, marred by some Romantic, politically correct lessons teaching children to “Be who you truly are” with no reference to God or God’s law, title character tends to spend most of the time doing what SHE thinks is right until she’s proven wrong, some feminist empowerment lessons, and some LGBT, pro-homosexual messages (a nonbinary character stars in practically every episode, and one character has two homosexual fathers who appear in multiple episodes), plus some occultism where museum figures magically come to life
Foul Language:
No foul language
Violence:
Light, mild action and peril such as young girl falls down when a talking dodo bird startles her, large dinosaur skateboards off a rail, and girl has to dodge its tail, stampeding her of caribou crash into objects and drag girls along by a rope, characters leap over a running elephant, characters threatened by rockslide, girl uses rope to save bird from dangerous rockslide
Nudity:
No nudity
Alcohol Use:
No alcohol use
Smoking and/or Drug Use and Abuse:
No smoking or drugs; and,
Miscellaneous Immorality:
Title character sometimes is disobedient but part of the program’s story is about her learning to be more responsible and make wise decisions, as taught by her mother and grandmother, and there isn’t a representation of a typical family in this show (there is no father figure whatsoever in Ridley’s life, all she has is her mother and grandmother, which are atypical of a traditional biblical family ordained by God’s Word Written in Genesis 2:24 and by Jesus in Matthew 19:1-12).

If Indiana Jones were a preschool girl who lived in the world of NIGHT OF THE MUSEUM, it would accurately describe the concept of RIDLEY JONES, an animated TV series streaming on Netflix. Ridley Jones is a little girl who lives in a museum with her family of magical caretakers. When she learns that her family has a magical power that can bring the museum exhibits to life, she wants to become one of the museum caretakers. So, her mom decides to teach her how to do the job while going on adventures with a team of her friends from the exhibits, which she calls The Night Eyes.

Basically, each half-hour episode in the first season is broken into two 14-minute stories. Ridley and the other characters, who are museum exhibits, who have come to life, go on adventures together. These friends include the cowardly yet good-hearted dodo bird Dudley, a skateboarding 90s throwback dinosaur named Dante, a space astronaut monkey named Peaches, a hip fashion forward mummy queen called Ismet, and a gender-neutral big-hearted bison named Fred. Over the course of the show, young viewers are exposed to a world of seemingly exhilarating adventure designed to teach children responsibility, problem solving, history, dealing with emotions, and how to grow up.

RIDLEY JONES is exciting to watch. For the most part, children will like the characters and be amused by the animated adventures.

However, although RIDLEY JONES sounds like a fantastic adventure that children should be able to enjoy, the program has some elements of concern for media-wise parents. The first is that the show embraces the “Sexual Revolution” on three main counts. First, the program has a feminist subtext. There is no positive father figure in the title character’s life, only her mother and her grandmother. Also, in the series, Fred the Bison identifies as non-binary, and Ismet the mummy princess has two married mummy fathers instead of a traditional family. These elements could confuse children into accepting same-sex marriage as not only normal but something to be glorified. In addition to embracing the Sexual Revolution, there are many moments where Ridley and her friends go into dangerous situations with rockslides, floods, extreme weather conditions, piranhas, and trash compactors, often without the accompaniment of the adults in her life. Speaking of the adults in her life, one of the program’s positive elements is that Ridley has positive role models who provide advice and help Ridley to grow and deal with problems out of her scope.

Thematically, RIDLEY JONES has some good qualities. There are important lessons that children can learn from the program. Children will learn that when they are in over their heads that the best thing, that they can do is ask for help, especially from an adult. The show also teaches children to be honest about what is bothering them and to tell people when a problem arises. However, the show also offers advice that is questionable at best. For example, the writers stress the Romantic message “Be who you truly are,” which has many negative interpretations in the modern world. Overall, the show presents an interesting and unique concept, but it has so many materialistic and worldly views that warrant caution for children.

The first episode of RIDLEY JONES has some light action and jeopardy. For example, in the first story of Episode 1, “Ready or Not, Here I Come,” Ridley has to direct a stampede of caribou back to their exhibit, but not before they knock down a bunch of objects. In the second story, “Some Like It Hot,” Ridley and her team must evade a dangerous rockslide.