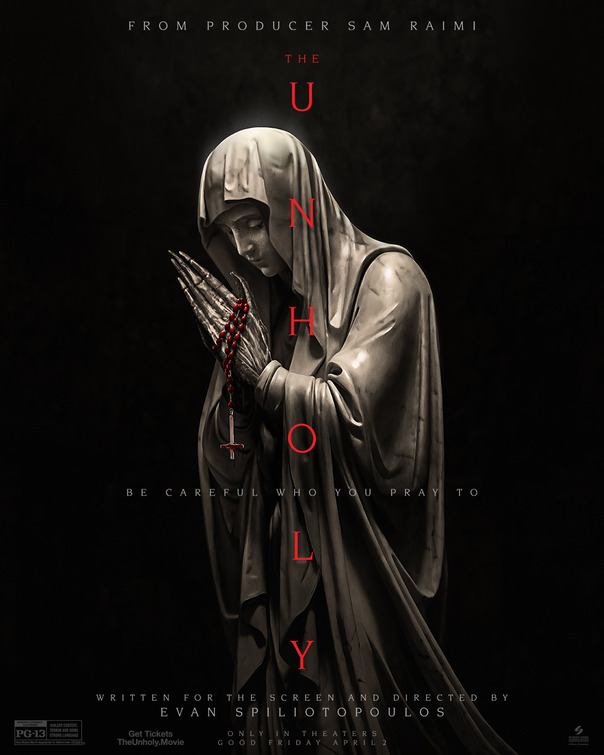 THE UNHOLY centers in on a small town, Banfield, Massachusetts, where it appears that a young woman can perform miracles under the direction of Mary, the mother of Jesus. A middle-aged Boston journalist, Gerry Fenn, is in Banfield when the town starts gaining global attention for these miracles. Fenn starts to question their validity when demonic situations start to occur. Is the young woman really under the influence of the Virgin Mary, or something else? Will truth and goodness prevail?

THE UNHOLY is a well-made, captivating horror movie with a strong Christian worldview. It’s clear early on that the Christian characters recognize the tension between good and evil. For example, a priest says that Satan is always after the faith of those who believe in miracles. Also, characters take communion and exercise their faith, prayer plays an important role, and there are themes of sacrifice and resurrection. However, the movie’s plot centers on the Virgin Mary as the Christlike figure, not Jesus Christ. So, MOVIEGUIDE® advises extreme caution for this problem, some foul language and scary encounters with demonic forces.

(CC, BB, FR, O, LL, VV, A, M):
Dominant Worldview and Other Worldview Content/Elements:
Strong Christian, biblical worldview with talk about faith, an answered prayer to God, priest says Satan is always after the faith of those who believe in miracles, themes of sacrifice and resurrection, Christian characters recognize the tension between good and evil, characters take communion and exercise their faith, and there’s one character who mentions he’s strayed away from the Catholic faith of his youth but prays to God at an important point, but, instead of stressing faith in Jesus, the plot centers on the Virgin Mary as the Christlike figure, not Jesus Christ, and people are told that, if they do Mary’s will, she will reward them accordingly, and the antagonist is a demonic figure from the grave who haunts the movie’s characters;
Foul Language:
11 obscenities (including one “f” word), two Jesus profanities, three light profanities, and a mention of cow excrement;
Violence:
Two depicted hangings, a mention of suicide, a mention of cutting throats, an implied burning at the stake, demonic ;
Sex:
No sex;
Nudity:
No nudity;
Alcohol Use:
A man pours liquor into his coffee, and the man has a beer with a woman who has some liquor;
Smoking and/or Drug Use and Abuse:
Character alludes to someone having an illness due to smoking; and,
Miscellaneous Immorality:
Mention of lying.

THE UNHOLY begins in the year 1845. The camera shots are from the point of view of a woman who’s taking an intense beating, then hanged and burned at the stake in a field.

Cut to present day. A middle-aged journalist, Gerry Fen, eats his breakfast in Boston before venturing to a town in central Massachusetts called Banfield. In the fields of Banfield, Fenn starts hearing voices by the same tree viewers saw at the beginning of the movie, not to mention a black crow. He goes to investigate and sees a glimmering light at the entrance to a divert in the tree. Apparently, it’s a corn baby, a doll that farmers use to plant for good luck during the harvest.

On his way back to Boston, Fenn barely escapes hitting a young woman on the road. He follows her to the tree, where he hears her speak.

Fenn takes her to the small Catholic church near the tree, where she’s looked after by her uncle, the priest in the church, and a doctor. They claim that the woman, named Alice, is deaf and dumb. They don’t believe Fenn’s story that he heard Alice talk. Fenn feels compelled to investigate what’s going on with Alice. He convinces a big-time paper to let him stay in Banfield and investigate further.

The next day, Alice appears at her uncle’s church and is compelled by a voice that she asserts is Mary, the mother of Jesus. She tells churchgoers to have faith in Mary and the next day, with the help of Mary, she will perform a miracle. The following day, Alice seems to do just that as a paralyzed boy regains his ability to walk. The church and the miracles of Alice speaking and the boy walking garner the attention of the Pope, who will assign the site in Banfield as a shrine, should the miracles meet the requirements of the Catholic Church.

During the press coverage and local rucks of Alice’s connection to Mary, Fenn tries to weigh the truth of the matter and isn’t convinced that the miracles are legitimate. Will truth and goodness prevail?

THE UNHOLY follows classic horror movie tropes. For instance, eerie situations divert the viewer’s attention. The actors do a stand-up job in their roles and the script has a solid pace. Also, the script does a great job explaining the plot’s intricacies in a captivating way. There are a few instances with demons that aren’t exactly top notch in terms of CGI, but they won’t dissuade interested viewers.

THE UNHOLY has a strong Christian worldview. It’s clear early in the movie that the Christian characters recognize the tension between good and evil, and there are several demon-like figures too. In fact, a priest affirms that Satan is always after the faith of those who believe in miracles. Also, characters take communion and exercise their faith. There’s one character who mentions he’s strayed away from the Catholic faith of his youth but prays to God for help at an important point.

Instead of stressing faith in Jesus, however, the movie’s plot centers on the Virgin Mary as the Christlike figure, not Jesus Christ. According to the Bible, however, Jesus commands us to come to Him for salvation, forgiveness, protection and service, not to come to His mother, Mary. In John 14:13, for example, Jesus tells the apostles, “Whatever you ask in my name, this I will do, that the Father may be glorified in the Son.” In THE UNHOLY, Alice asks other Catholic Christians to have faith in Mary, not Jesus. MOVIEGUIDE® advises extreme caution for theological issues, some foul language and scary encounters with demonic forces.