"Not Much to Rave About" 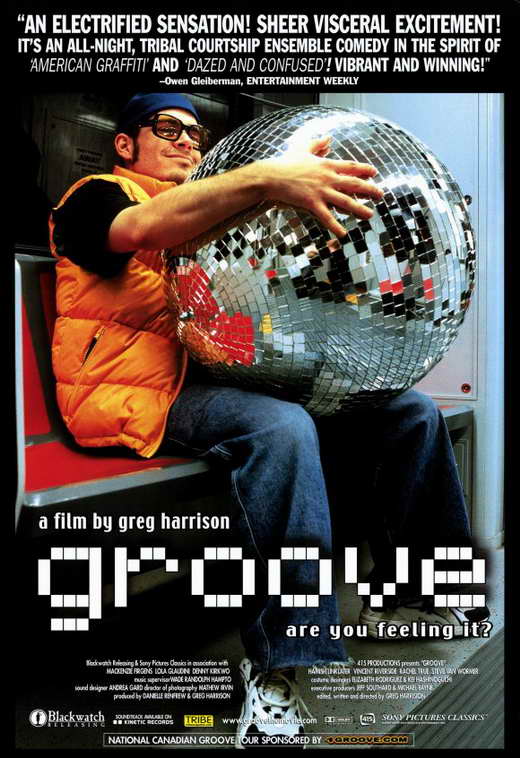 The underground "rave" scene, complete with deejays, drugs and delusion, is depicted in GROOVE, a movie that takes viewers into the fast-paced, dangerous world of “happiness.” Although not all raves involve the use of drugs, this depiction is comprised of excessive drug use, though not always with a glamorous allure. In the movie, set in San Francisco, a young man named Colin convinces his brother to go to a rave party with his live-in girlfriend, Harmony. Colin proposes to Harmony but starts taking different drugs. When Harmony catches him kissing another man, it damages their relationship.

GROOVE’S portrayal of the rave scene is irresponsible, implying that the only way to have fun is by using drugs. Yet, there is some truth in its depiction of some of the consequences that can come from participating in this type of scene. Even so, the excessive drug use, foul language, promiscuity, and homosexuality all make GROOVE not much to rave about to anyone. The acting is varied, sometimes mediocre, and sometimes decent. The only really interesting aspect to the movie is the concentration on the DJs and their music, which, regrettably, may be an attraction to many teenagers.

(PaPa, FR, HoHo, LLL, SS, N, AA, DDD, MM) Pagan worldview with elements of false religion & homosexual behavior; 28 obscenities, 2 profanities & a few slurs; no violence; gay couple depicted lying next to one another in bed but fully clothed, gay lovers kiss, man entices other man under the influence of drugs then they kiss extensively, & brief depiction of couple fornicating; no nudity shown; alcohol use & abuse including taking drugs with alcohol; excessive & irresponsible drug use throughout the entire movie with one character slipping into dangerous unconscious state; and, elements of cheating & evading the law.

The underground world of “raves” has remained strong despite the changes they have undergone in the last 10 years. Now, a rave can be anything from a dance party with a lot of techno music to an all-out drugfest. The latter is depicted in GROOVE, a movie about this scene in all aspects, positive and negative.

David (Hamish Linklater) has always been straight-laced and focused. His brother, Colin (Denny Kirkwood of NEVER BEEN KISSED), is almost the complete opposite. He’s into the rave scene, as is his live-in girlfriend, Harmony (Mackenzie Firgens). One afternoon, while in a chat room on the Internet, David is astonished at a message from a girl named Leyla (played by Lola Glaudini of DOWN TO YOU). She not only describes what she will be wearing to the party that night, but also asks for a ride. David comments to Colin on the normalcy of someone being picked up by a total stranger.

Colin asks David to go to the party, and David is adamant at first, but when Colin asks him to go because he has a surprise for Harmony, David reluctantly agrees. Meanwhile, people around the San Francisco area are getting ready to go to the party. Leyla keeps answering her phone, saying she has found a ride, but to look for her at the party. Two homosexual lovers try to decide what to do that evening, one especially looking forward to celebrating their one-year anniversary. They met at a rave where Digweed, a talented DJ was spinning, and tonight he is going to be at the party.

David, Colin and Harmony pile in the car and head off to find the “guide,” who gives out directions to the rave for three dollars, preventing the location from getting out to the public. Soon after, Leyla is seen piling into a car with a bunch of college girls and heads off to the party. The bash is almost fully set up, and the group working on it all day has slowly transformed an abandoned warehouse into a multi-room club-like scene. David looks around, introduced to this world for the first time. Soon Colin finds him and tells him that it’s time for Harmony’s surprise. Colin tells Harmony to close her eyes and open her mouth. Thinking he will probably give her a type of drug, she is surprised when he places a ring in her mouth, and jumps around with joy at his proposal.

Colin then hands David a bottle of water and the three each take a small pill. After a while, David begins feeling the effects of the drug and hesitantly looks at a table full of bottled water. Leyla, sensing that David isn’t used to the scene, tells him the water is free and the two begin talking. David is really experiencing the drug now, and Leyla sits with him, telling him to keep drinking water. They begin talking about their lives, realizing that they have a lot in common. They even venture into the dreams they each have, making Leyla a bit uncomfortable at the idea of finally conversing with someone to whom she can relate.

On the dance floor, the crowd is going crazy with DJ after DJ stepping up and spinning their records. DJ Snaz is up first, and his style is enough to get people to dance, though he is young and inexperienced. After his set, DJ Polywog takes the tables and really gets the crowd going, with Snaz looking on in awe. Harmony is on the dance floor, with her friends admiring her ring. After awhile, she asks if anyone has seen Colin and sets out to find him.

Colin has been taking different types of drugs, anything from pills to one in the form of a lollipop. Another man, noticing Colin’s inability to think straight, begins talking with Colin and kisses him. Eventually, the two men begin kissing heavily until Harmony discovers them. Obviously hurt by their actions, she attempts to cover up her feelings by asking, “how can you guys be back here when all of the fun is out on the dance floor?” Colin then wanders out onto the dance floor, where Harmony sees him and leads him out into another room. She begins kissing him and the two fornicate.

Eventually, the cops come to break up the party, and everyone scatters. With virtually everyone gone, the warehouse is empty, until DJ Digweed shows up. Taking his entrance as a cue, the man in charge of the party gets it going again, and soon everyone is back, with the party alive more than ever due to Digweed’s talents. Asked why the man in charge keeps going through the trouble of having raves, he merely replies, “because of the nod. Someone always comes up to me after one of these things, thanks me for doing something like this and gives me the nod. That’s why I do it.”

GROOVE’s portrayal of the rave scene is irresponsible, implying that all raves are full of drugs and that the only way to have fun is by using drugs. Yet, it is truthful in its depiction of the implications that can come from participating in this type of scene. Harmony’s character is seen crying the morning after the party, while Colin is in the shower, implying that even though she tried to “erase” everything that had happened by fornicating with him, the problems, hurt and even the destruction of their relationship was still there. The acting is varied, sometimes mediocre, and sometimes decent. The only interesting aspect to the movie is the concentration on the DJs and their music, which, regrettably, may be an attraction to many teenagers. This may have been a pump for an admirable soundtrack, though the pre-occupation with drugs makes this movie a sad, shallow portrayal of having “fun.”