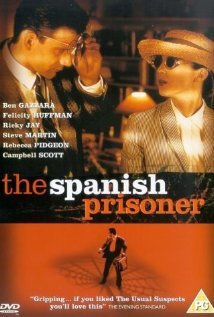 In THE SPANISH PRISONER, Joe Ross (Campbell Scott), a brilliant engineer, develops a top secret invention to make a fortune for his company, but runs into a sinister conspiracy to steal the process to the invention. Tricked into delivering the only copy of the process to Jimmy Bell (Steve Martin), a mysterious jet-setting businessman, who stands him up at a pre-arranged meeting, Joe goes to colleagues he thought were friends but discovers that they too are somehow involved in the conspiracy. Joe pursues company secretary Susan Ricci (Rebecca Pidgeon) to a New York ferry, where the movie's surprising climax occurs.

With minimal foul language, minimal violence, no sex, but full of clever plot twists and a surprise ending, THE SPANISH PRISONER harks back to the good old days of Alfred Hitchcock's Hollywood whodunits with clever execution and sustained suspense. THE SPANISH PRISONER uses clever storytelling and clipped dialogue to depict a classic whodunit set around 1990s corporate intrigue. It depicts an intriguing mystery that keeps the audience guessing the whole time it unravels in front of the camera. THE SPANISH PRISONER will delight moral audiences with classic, clever detective storytelling. The only problem might be the main character's failure to seek God's help in his crisis.

(H, V, M) Humanist worldview of a brilliant engineer who falls victim to corporate shenanigans; one profanity; scene of dead man sitting with knife in his stomach & man fires drug bullet at other man; and, betrayal & evil scheming.

Fresh from having written his cinematic success, THE EDGE, which won a MOVIEGUIDE Award for cinematic excellence in 1997, New York screenwriter-turned-director David Mamet now presents audiences with his latest mystery-thriller, THE SPANISH PRISONER. THE SPANISH PRISONER harks back to the halcyon days of Hollywood’s past, when studios, who had to abide by the Motion Picture Code, could not depict graphic violence and did not possess the technology to carry a picture solely on the strength of their special effects. A well-written whodunit centered around 1990’s corporate intrigue with minimal sex and violence, THE SPANISH PRISONER keeps its audience guessing until the very end of the movie. The movie features Steve Martin in a rare role playing a villain.

In THE SPANISH PRISONER, Joe Ross (Campbell Scott) accompanies his boss, corporate executive Mr. Klein (Ben Gazzara), and his entourage to St. Estephe, a fictitious Caribbean island resort where Klein engages Ross to explain some of the technology he invented as part of a presentation to big stockholders. Accosting Mr. Klein after the meeting, Joe attempts to get him to define his profit participation, but Klein demurs, telling him relax and enjoy the scenery. He takes a walk on the beach to mull things over.

As he poses with company secretary Susan Ricci on the beach and takes a picture of a pretty passing woman, he meets Jimmy Bell (Steve Martin), a mysterious jet-setting businessman, who invites him to dinner the next week in New York. Bell asks him to carry a book with him back to the city to give to his sister in a swanky New York high-rise apartment building. Joe suspects that Jimmy has sinister motives and inspects the book for concealed drugs, but finds none. He delivers another copy of the same book to the building’s doorman. At the office, a secretary, Susan Ricci (Rebecca Pidgeon), admits her crush on him and offers herself to Joe, but Jimmy’s phone call inviting him to dinner interrupts her romantic scheme. At dinner, Jimmy suggests that the company is trying to cheat Joe out of his rightful share of the enormous profits from his invention and tells him about a lawyer he knows who can plead his case.

His suspicions raised, Joe returns to work. There, Klein asks to speak with him in his office. When Joe enters, two lawyers flank Klein, proffering a “contract re-instatement” and insisting that he sign. When Joe asks what is wrong with his original contract, the lawyers do not answer but keep on pressing him to sign the reinstatement. Thoroughly angry, Joe calls up Jimmy and asks him about the attorney he recommended. Jimmy tells him to meet him at the carousel and bring the only copy of the process to the invention. He also alerts an FBI agent named McCune (Felicity Huffman), whose card he finds in Susan’s trip diary. When he arrives at the meeting place the next day, Joe encounters Agent McCune with her assistants, who wire him with a special listening device in an unmarked van. The FBI agents are all business. Joe leaves the van carrying the book with the process and walks toward the carousel. He waits for Jimmy, but Jimmy never appears. Glancing down at his book, he sees that someone has already switched it for a phony. The pages are all blank.

Realizing that someone has stolen the process, he falls back on the only person he thinks he can trust: George (Ricky Jay), his colleague and confidant. Going to George’s apartment, he discovers him stabbed to death. As he begins to pull out the knife, he hears police car sirens descending on the building. He leaves by a second story window, a wanted fugitive.

Joe goes to Susan’s apartment, where he tells her that he needs to find Jimmy Bell. Remembering that the St. Estephe Island hotel had photographed Bell on its interior cameras, he decides he needs to return to the island. Susan offers to pay for his flight back to St. Estephe and even gives him a plane ticket and her red purse of money. She creates a scene at the airport where the police are detaining arriving vehicles, and Joe gets in line. Then, Joe recalls that Jimmy placed his fingerprints on the book Joe brought back from St. Estephe. He leaves the airport line just in time to avoid being arrested for possessing a handgun on an aircraft, the real contents of Susan’s red purse. He examines his ticket and finds that Susan gave him a round trip to Venezuela, the only country without an extradition treaty with the US. Joe pursues Susan to a New York ferry, where the movie’s surprising climax occurs, fooling many viewers.

THE SPANISH PRISONER uses clever storytelling and clipped dialogue to depict a classic whodunit set around 1990’s corporate intrigue. The screenplay is excellent, even marvelous, as characters interrupt each other, delivering their lines on top of one another in David Mamet’s self-parody which reaches new heights of the same writing brilliance he demonstrated in 1997’s THE EDGE. It depicts an intriguing mystery that keeps the audience guessing the whole time it unravels in front of the camera.

With no violence, no sex and minimal foul language, THE SPANISH PRISONER will delight moral audiences with classic, clever detective storytelling with 1990s cultural trappings. The only problem might be the usual lack of the main character’s recourse to God in his times of crisis, as he relies solely on human solutions to his dilemmas.