"The Gospel’s Power to Redeem" 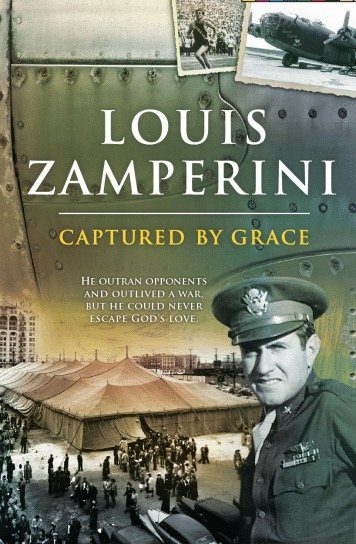 LOUIS ZAMPERINI: CAPTURED BY GRACE is a fantastic TV special from Fox News exploring Olympic champion and Christian evangelist Louis (“Louie”) Zamperini’s epic tale of survival during World War II and his ultimate redemption through Jesus. The documentary tells Zamperini’s story from his own words in an interview with Louis before his recent passing, edited with archival footage and additional narration.

The first half of CAPTURED BY GRACE covers Louie’s story from his Olympic days through the war and his trials as a POW, as shown in the recent movie UNBROKEN. The second half covers elements not included in UNBROKEN. After the war, Louis married and started a family, but the horrific memories of his days as a POW spurred him toward alcoholism. His alcoholism was so bad, it nearly ended his marriage to his wife, Cynthia. When a Billy Graham crusade rolled into Los Angeles, Cynthia found salvation in Christ. She made the reluctant Louis attend the crusade as well, and he too found salvation. The rest of the story is a spiritually uplifting story of abundant life through Jesus Christ.

LOUIS ZAMPERINI: CAPTURED BY GRACE is a fantastic TV special that aired on Fox News exploring Christian evangelist Louis (pronounced “Louie”) Zamperini’s epic tale of survival and his redemption through Jesus. The documentary tells Louie’s story from his own words in an interview with Louis that was filmed before his passing, edited with archival footage and additional narration.

As shown in the movie UNBROKEN, the first half of the TV special covers his incredible survival story and history. The son of Italian immigrants, Louis goes from being a mischievous young boy to an Olympic runner at the 1936 Berlin Olympics. When World War II begins, Louie joins the Air Force, but a tragic malfunction one day causes his plane to crash into the ocean. Only Louie and two men survive. Stranded for weeks on a raft, Louie and the other men strive to survive, but bad goes to worse when they’re taken by the Japanese army as prisoners of war. Louis is tortured and tormented by a particular Japanese prison camp officer known as “The Bird,” but he endures and survives through the war.

The second half of the documentary covers elements not included in the movie UNBROKEN. First, it discusses Louis’s marriage to Cynthia, and the start of a family, his post-traumatic war stress, and the daily nightmares that haunted him. This sent Louis toward alcohol, which was the only way he could drown his horrific memories. His alcoholism almost ruined his marriage, but when his wife Cynthia attended a Billy Graham revival service, she found the Lord and refused to give up on Louis.

Louis wanted nothing to do with Christianity, but Cynthia convinced him to attend one of Billy Graham’s crusades taking place in Los Angeles. After storming out of the first service, Cynthia brought him back the second day, and it was then that the words spoken pierced his heart. At that crusade, Louis remembered the promises he made to God when facing death during World War II and saw that God had preserved his life. So, he decided to answer the altar call and give his life to Jesus. Immediately, the hate and resentment Louis had toward his former captors disappeared and the alcohol addiction ended. He even returned to Japan to forgive his former tormentors and present them with the Gospel of Jesus Christ.

CAPTURED BY GRACE honors Louie’s legacy and exemplifies the power of Jesus Christ, who redeems us from our sin and makes us new. It’s an excellent, spiritually uplifting documentary short that captures the amazing life of one man who found a friend in Jesus and became an exemplary citizen not just of Heaven but also of the world.