"Building Courage Is Part of Becoming an Adult" 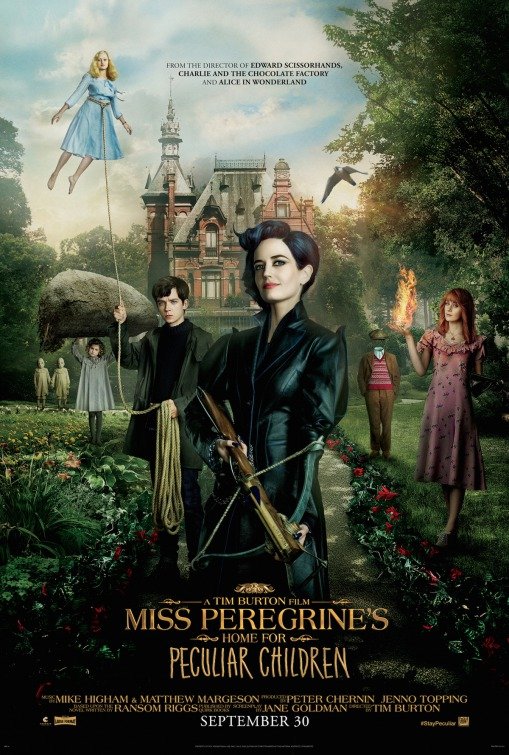 MISS PEREGRINE’S HOME FOR PECULIAR CHILDREN is an entertaining, scary fantasy about a special orphanage for children with “peculiar” powers and physical traits. Jake, a Florida teenager, has heard his grandpa’s tales about Miss Peregrine and her orphanage for peculiar children since he was young. When his grandpa dies under mysterious circumstances, Jake thinks he sees a scary monster in the shadows. He and his father travel to the island where the orphanage is located, off the coast of Wales. There, Jake finds more strange, dangerous adventure than he could possibly want. People will die unless he finds the courage to be a hero.

MISS PEREGRINE’S HOME FOR PECULIAR CHILDREN has a convoluted plot, so there’s some expository dialogue that slows things down. However, once the menacing villains make their appearance, the pace quickens, leading to a fun, heroic, imaginative ending. The villains are scary, however. There’s also some brief foul language and some magical, humanist elements within the basic story of growing up, protecting the vulnerable and finding courage. So, MOVIEGUIDE® advises strong caution for MISS PEREGRINE’S HOME FOR PECULIAR CHILDREN.

(Pa, B, H, O, L, VV, M) Light mixed pagan worldview with some moral, humanist and occult elements and some magical thinking; three relatively light obscenities and one gratuitous GD profanity; strong, often scary violence involving scary monsters and peculiar powers including girl has mouth in back of her head with pointy teeth, villain almost is turned into a giant monster, but his teeth become pointy, giant bony monsters have pointy teeth and eat people, giant monsters are killed, villains are killed, villains hunt down children, children barely escape bomber releasing a bomb, scene shows human villains sitting around a table swallowing a platter full of eyeballs to retain their humanity, people swim underwater to scary sunken ship with skeletons, girl blows air into ship to make it float or to create a room with breathable air pocket, girl creates bubble helmet for boy, girl has to be tied down with a rope or else she floats away, villain threatens people with sharp blade for his hand, villain is able to shape shift, but he’s really a giant monster with sharp teeth and lethal blade hands if he needs them, children pelt giant monsters with snow and candy to make them visible to themselves and others, people shoot crossbow arrows at villains and giant monsters, villain tries to drown girl, girl sets fire to things, villains turned to stone; no sex but teenagers kiss chastely; no nudity; no alcohol; no smoking or drugs; and, villains seek immortality without God and have to injure people to get it, boy lies to father so he can explore island without worrying his father, villains hunt children.

MISS PEREGRINE’S HOME FOR PECULIAR CHILDREN is an often scary fantasy about a teenage boy who discovers a secret world of children with weird, sometimes macabre powers and the human monsters stalking them to achieve an unnatural immortality. Directed by Tim Burton, MISS PEREGRINE’S HOME FOR PECULIAR CHILDREN is a story about protecting vulnerable children and finding courage, but it has some scary scenes reminiscent of the more scary scenes in the first TOY STORY movie, plus brief foul language.

A loose adaptation of the original novel, the movie opens in a suburban Florida town, where teenager Jacob has a special relationship with his grandfather, Abe. Abe has told Jake many weird and strange stories about the orphanage where Abe grew up, located on an island off the coast of Wales. Abe tells Jake the orphanage was run by a woman named Peregrine, who could turn herself into a falcon.

Early one evening while working at his supermarket job, Jake gets an urgent call from his grandfather. Jake’s boss gives him a ride to his grandfather’s house, where he finds the living room disturbed and his grandfather lying outside in the grass. Abe suddenly wakes up, and, to his horror, Jake sees that his grandfather has no eyes in his sockets. Abe gives Jake a cryptic message about a loop and a bird before he dies. Jake suddenly sees a huge shadow of a creature lurking about, but his boss shoots at it with her gun, and it disappears in the fog.

No one believes Jake’s story about the creature. The police think wild dogs mutilated Abe’s body. So, Jake’s parents send him to a female psychiatrist, Dr. Golan. She encourages Jake to travel to Wales with his father, a bird scientist, to seek answers about his grandfather’s life and the truth behind his fantastic stories.

While his father goes bird watching on the beach, Jake explores the island. Eventually, he discovers that a German bomber destroyed the orphanage on Sept. 3, 1943, but that Miss Peregrine has the power to create a 24-hour time loop to protect the children. All of the children have weird, sometimes macabre powers, such as an ability to float in the air, an ability to create fire, an ability to bring back dead people briefly, an ability to make plants grow, an ability to project dreams, etc. Jake is clearly attracted to the teenage girl who can float, which makes one of the other teenage boys jealous.

Jake soon learns, however, that Miss Peregrine is not only protecting the children from a German bombing run. She’s also protecting them from an evil scientist and his monstrous minions who hunt the peculiar children protected by women like Miss Peregrine. The evil scientist wants to kidnap Miss Peregrine and others of her kind for an experiment designed to make him immortal. Some of the scientist’s minions are giant monsters only Jake and his grandfather could see. Jake’s grandfather used to help Miss Peregrine protect the children from them, but left the orphanage as a young man to fight in World War II and explore the world.

MISS PEREGRINE’S HOME FOR PECULIAR CHILDREN has a convoluted plot, so there’s some expository dialogue that slows things down. However, once the villain is fully exposed and starts attacking, the pace picks up tremendously. In fact, the ending is one of the more imaginative, suspenseful, exciting, and funny endings of a live-action family movie in recent years. Director Tim Burton pulls out all the stops in the ending’s fun homage to Hollywood special effects.

On the one hand, it’s a movie that extols taking care of children and good parents and grandparents. Though the hero’s mother and father are holding him back in a way, his grandfather is depicted as a beloved, caring person who understands the need of his grandson to leave the nest and explore the world. Also, Miss Peregrine herself displays the characteristics of a no-nonsense, but nurturing and caring, mother. Furthermore, as the plot develops, Jake and Emma take on the characteristics of a father and mother who help the other peculiar overcome the story’s monstrous villains. In the process, they instill the other children with courage to take an active role in battling the evil monsters threatening them and Miss Peregrine.

On the other hand, the movie inserts a humanist twist into its story. Miss Peregrine at one point tells Jake the abilities of the “peculiar” children have a genetic source, sort of like the X-Men superheroes in Marvel comic books. God isn’t mentioned in this explanation, though it also becomes obvious that the villains have become monsters because they are trying to manipulate the natural order of the world and seek immortality without God. The movie also contains some magical thinking and occult elements, as with Miss Peregrine’s ability to create a time loop to protect the children from harm and hide them from the evil scientist and his cohorts or with the one child’s ability to project his dreams, which sometimes predict the future.

The biggest caution for MISS PEREGRINE’S HONE FOR PECULIAR CHILDREN, however, is probably the scary nature of the children’s encounter with villains and monsters. The evil scientist’s experiments to achieve immortality are turning him and his compatriots into monsters. In a gross twist, the villains [SPOILER ALERT] can get back some of their humanity by eating the eyeballs of the peculiar children. That’s why women like Miss Peregrine create time loops to hide their children from the villain and his dastardly friends. When this gruesome quirk is explained to Jake, a scene is shown where the evil scientist and his friends sit around a table and swallow a platter full of wriggling eyeballs. Some of the children’s abilities are also scary. For instance, one of the little girls has an extra mouth at the back of her head and her mouth is filled with sharp teeth.

The cast does a good job of bringing this scary, visually enticing, sometimes funny fantasy to life. Eva Green as Miss Peregrine, Asa Butterfield as Jake, Ella Purnell as Emma, Terrence Stamp as Jake’s grandfather, and Samuel L. Jackson as the evil scientist are especially good.

Finally, MISS PEREGRINE’S HOME FOR PECULIAR CHILDREN has some brief foul language, including one GD uttered in frustration. So, all in all, strong caution is advised.