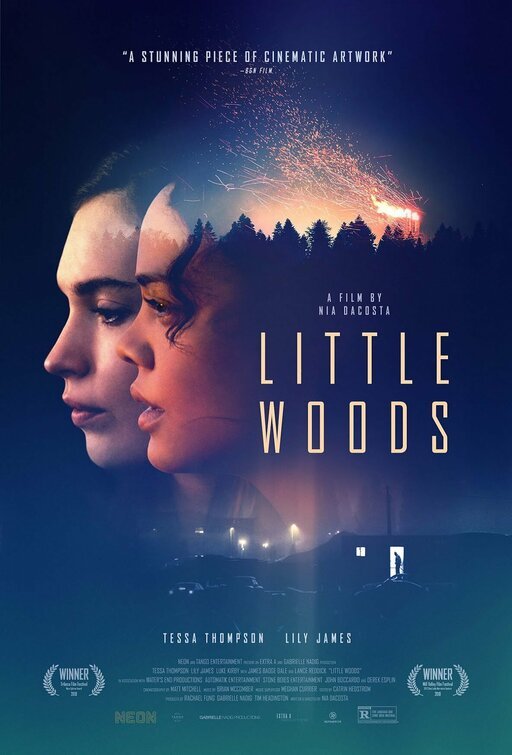 LITTLE WOODS tells the story of two half-sisters in North Dakota who choose abortion and drug dealing to make ends meet. Their mother has died, and the adopted daughter, Ollie, has been struggling to meet the mortgage. Ollie is desperate to make money the honest way after being on probation for selling prescription drugs. However, Ollie’s half-sister, Deb, informs Ollie she’s pregnant. When the bank tells them they must meet the mortgage payments, or it will foreclose, Ollie decides to start selling pain pills illegally again. Meanwhile, Deb considers getting an abortion.

LITTLE WOODS shows some talent behind the camera, but fails otherwise. It’s emotionally and dramatically involving, in a quiet, patient way. However, it has a very strong pagan, feminist, politically correct worldview that advocates the ends justify the means. It also delivers a very strong pro-abortion message. In addition, it makes excuses for the one sister going back to a life of crime to sell drugs illegally. Finally, its depiction of life in North Dakota is too dark. LITTLE WOODS is an abhorrent, offensive movie in more ways than one.

(PaPaPa, FeFeFe, PCPCPC, RoRoRo, AcapAcap, APAP, LL, V, S, AA, DDD, M):
Dominant Worldview and Other Worldview Content/Elements:
Very strong pagan, feminist, politically correct worldview advocates the ends justify the means to deliver a pro-abortion message and a message supporting the selling of poisonous drugs illegally, with very strong Romantic, anti-capitalist elements attacking America’s healthcare and economic systems in a leftist way that avoids the real issues and real solutions to deliver an emotional argument rather than a rational, factual one, plus a negative view of contemporary America
Foul Language:
12 obscenities (mostly “f” words) and seven profanities (several strong profanities using Jesus), plus a sick child vomits into a bowl
Violence:
Punches are thrown during a bar fight, two scenes of men threatening women using physical violence, a woman pushes and slaps a man for being drunk
Sex:
Implied fornication in a subplot about an unwanted pregnancy
Nudity:
No explicit nudity, but a character walks through a strip club with scantily clad women pole dancing (but none shown topless)
Alcohol Use:
Various scenes of people drinking in bars or having beer in their homes, a man is drunk during the day, woman gets drunk in a bar and causes a bar fight and drives home intoxicated, and another woman drinks whiskey while pregnant
Smoking and/or Drug Use and Abuse:
Two women smoke throughout movie and there’s a strong theme of opioid and other prescription drug use where woman sells pills throughout the movie but never takes them herself; and,
Miscellaneous Immorality:
Criminals pressure woman to give them something more for providing her with a fake ID.

LITTLE WOODS tells the story of Ollie (Tessa Thompson), an ex-opioid dealer forced back into the game in order to stop the bank from foreclosing on her pregnant sister’s house. Things get more and more complicated as she gets in deeper with local dealers, and her sister debates whether or not to keep the baby growing inside her.

On the surface, LITTLE WOODS is a well-done indie movie with excellent performances and nuanced themes. The movie’s biggest strength is the way it humanizes the emotional connections between Ollie and her half-sister, Deb, plus their financial struggles. However, the movie turns out to be strongly pro-abortion and ultimately justifies all of Ollie’s illegal actions. LITTLE WOODS is an abhorrent movie, which also contains some strong gratuitous obscenities and profanities.

At the beginning of LITTLE WOODS, Ollie is struggling to make ends meet in her small, North Dakota town. Since her mom just passed away, she’s left with paying back the mortgage or the bank will foreclose on the house. Ollie used to sell opioids and other prescription drugs to the townspeople who can’t afford proper healthcare, but got caught smuggling pills into the US from the Canadian border. Now, she only has eight days left on her probation, makes honest money by doing odd jobs around town, and desperately wants to get a proper job away from illegal activity.

Deb (Lily James), Ollie’s half sister (Ollie is a black woman who was adopted), just found out she’s pregnant. Deb is already a single mom who lives in a trailer with her son, Johnny. The two can barely make ends meet as it is. As Deb discovers the health costs of having a baby, she considers having an abortion, but can’t afford that either. Ollie knows she must take care of her sister before Ollie can leave town for an honest life. If the two sisters can find a way to pay the overdue mortgage on their mom’s house, Deb and Johnny can move into it, and Ollie can leave for her new life knowing that her sister is taken care of as well. However, the bank tells them they only have a week to come up with thousands of dollars. Ollie thinks there’s only one way to make that kind of money. With only four days left on her probation, Ollie gets back into the game of illegally smuggling and selling pills.

As Writer/Director Nia DaCosta’s first feature, LITTLE WOODS shows some talent behind the camera, but has some huge problems that make it unacceptable for discerning media-wise people. The pacing is patient while trying to be emotionally involving at the same time. Also, the performances are often nuanced and emotional, in a quiet sort of way.

However, LITTLE WOODS has a very strong pagan, feminist, politically correct worldview that advocates the terrible idea of the ends justify the means. It also delivers a very strong pro-abortion message that also makes excuses for the one sister going back to a life of crime to sell drugs illegally. In addition, the movie depicts small town American life as economically deprived because of capitalism. The movie’s message here is that America’s capitalist system makes healthcare and owning a home unaffordable, especially in small town areas. That’s a Romantic, emotional, politically correct, false argument, not a rational one supported by facts. As a result, LITTLE WOODS avoids any of the real issues involved in making housing and healthcare affordable for people with low incomes. It also avoids any real solutions, especially conservative or capitalist ones. Making matters worse, by promoting abortion and drug dealing, LITTLE WOODS actually promotes evil solutions. By the way, poor mothers throughout the United States can get government aid not only for food and housing but also for taking care of their children during pregnancy and after birth! And, that doesn’t include the private assistance poor mothers can get from religious, medical and other charitable organizations. In reality, the unemployment rate in North Dakota has been hovering around 2.6% and below, one of the lowest in the country.

LITTLE WOODS is clearly an abhorrent, offensive movie in more ways than one.