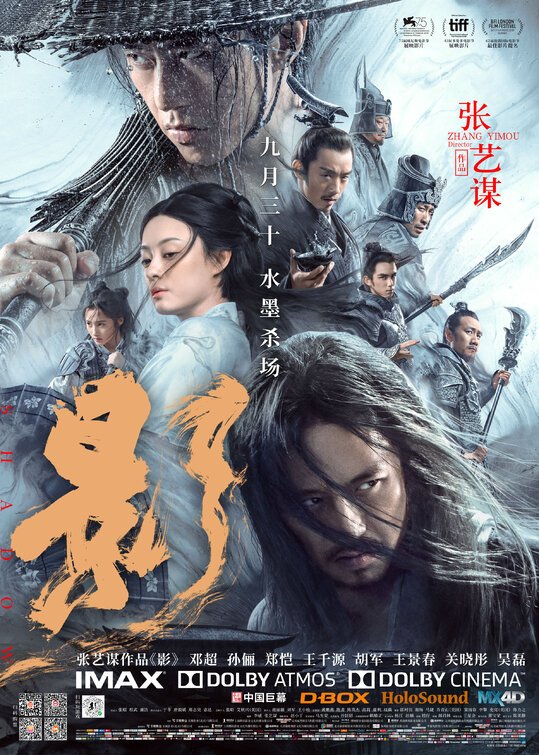 The movie’s director, Zhang Yimou, is one of cinema’s great visual stylists. Zhang usually uses vibrant, striking primary colors as part of his production, but this time the production design and costumes are in black, white and silver. SHADOW tells an engrossing tale of court intrigue and war, but the battles and duels get rather violent, so extreme caution is advised. SHADOW also has a mixed worldview containing an interesting combination of Chinese philosophical and spiritual notions mixing dualism with a primitive form of Chinese monotheism.

(PaPaPa, FRFR, B, H, L, VVV, S, N, A, MM):
Dominant Worldview and Other Worldview Content/Elements:
Very strong mixed pagan worldview with a combination of Chinese dualistic philosophy of yin versus yang and references to the Chinese Heaven, which is associated with the supreme deity the Chinese call Shangdi but which also gives Chinese rulers their mandate to rule society (the movie contains representations of the visual symbol of yin versus yang and verbal references to Heaven and the divine mandate of the kings in the story)
Foul Language:
One “d” obscenity
Violence:
Graphic and extreme violence mixed with strong violence includes many stabbings and slicings, people’s throats are cut or stabbed with spear-like weapons and knives, arrows fired and hit people, man trains with an umbrella versus a saber at the end of the spear and later (when the real battle occurs) he and other soldiers have a weapon that looks like the umbrella but that’s composed of long knives that can slice people or can be fired at people, assassinations and attempted assassinations, many duels during a battle (including two main ones that are key to the main plot), punching and kicking, man is given a blade wound so he can impersonate a military officer, etc.
Sex:
Implied adultery after some passionate kissing between a married woman and her husband’s double
Nudity:
Upper male nudity, no sexual nudity
Alcohol Use:
Brief alcohol use
Smoking and/or Drug Use and Abuse:
No smoking or drugs; and,
Miscellaneous Immorality:
Lying, deceit, betrayal, and revenge.

Chinese film director Zhang Yimou is one of cinema’s great visual stylists. His new movie, SHADOW, is about a dying military commander who uses a lookalike to help him retake a city run by a rival serving another kingdom that’s made an uneasy alliance with the commander’s own king. Zhang usually uses vibrant, striking primary colors as part of his production and costume design, but this time the production design and costumes are in black, white and silver. SHADOW plays like a Shakespearean tragedy as the commander’s shadow becomes trapped in the machinations between the commander, their own king, the king’s sister, the commander’s rival, and the commander’s wife. Everything leads to a big battle and a deadly duel between the shadow and the commander’s rival, followed by a couple assassination plots. Can the shadow, a poor peasant who only wants to return to his beloved mother, survive?

SHADOW is as visually striking as Zhang Yimou’s other movies. It tells an engrossing tale of secrets, world-changing betrayals, and intense battles for survival. The commander’s shadow is the most sympathetic character. He’s been thrust into a deadly situation and must have his wits about him if he’s to survive. The battles and duels in SHADOW get rather violent, however, so extreme caution is advised. Also, one scene implies that passionate kissing between the commander’s shadow and the commander’s wife leads to an adulterous hookup.

In the story, there are visual representations of the dualistic Chinese symbol of yin and yang, where yin is the negative, passive, dark, or feminine principle while yang is the positive, active, light, or masculine principle. Yang grows because of yin, but yin can’t exist without yang, just as shadow can’t exist without light. The dialogue contains references to light and shadow, and right versus wrong. It also contains references to the Chinese concept of Heaven. In Chinese philosophy and religion, Heaven can be associated with the supreme deity the Chinese call Shangdi, but Heaven also gives kings and emperors their divine mandate to rule. The young, unpredictable king in SHADOW refers to that mandate at least twice in the movie, and the military commander repeats that metaphor when he starts talking about his desire to replace the king. These ideas lead to a mixed worldview for SHADOW. Eventually, the military commander’s shadow must manage to turn defeat into victory when the king, the commander and the commander’s rival vie for power.