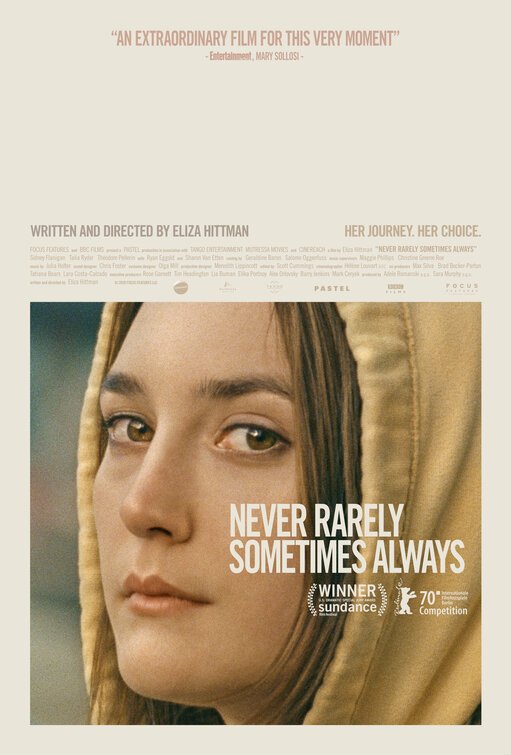 NEVER RARELY SOMETIMES ALWAYS begins as 17-year-old Autumn realizes she may be pregnant. She skips school and makes her way to a clinic, finding that she’s about 10 weeks pregnant. With her cousin’s help, Autumn flee Pennsylvania without their parents knowledge, so that Autumn can kill her baby at an abortion clinic in New York City. However, the process takes longer than she planned, and the girls find themselves alone, hungry and penniless in the big city for days until Autumn kills her baby.

(RoRoRo, PCPCPC, FeFeFe, AbAbAb, C, L, V, S, AA, DD, MMM):
Dominant Worldview and Other Worldview Content/Elements:
Very strong, but sometimes subtle and passive, Romantic, politically correct, radical feminist, anti-male, and anti-biblical, immoral worldview as the two main characters go to extreme lengths to secretly have an abortion without the knowledge or consent of a legal guardian or parent, the main character admits to already having six different sexual partners, and she is only 17, and a group of Catholic Christians people are shown doing “Hail Marys” in unison in front of an abortion clinic in one scene (the two female leads simply walk by them on the way into the clinic)
Foul Language:
Four obscenities (including one “f” word), one profanity, one brief scene depicting vomiting, one scene showing teenage girl pulling down her pants about to urinate into a cup for a test, and a teenage girl is called a “slut”
Violence:
A teenage girl is shown piercing her own nose showing some blood, a young girl punches herself repeatedly in the stomach in an attempt to end her early pregnancy causing multiple bruises, she also takes a bottle of Vitamin C which she assumes will terminate an early pregnancy, a doctor begins an abortion information video which very briefly shows a few disturbing images, it’s insinuated that a young girl has suffered some sexual/physical abuse although it’s not shown, and she admits to being forced to have sex before, and a feminine pad is shown briefly with a bit of blood on it
Sex:
Implied fornication as an unmarried teenage girl is pregnant and admits to having had six sexual partners since she first begin sexual activity at 14, a teenage boy makes an obscene sexual gesture with his mouth, the creepy manager of a grocery store kisses the girls hands when they turn in their register at night, teenage girl makes out with college-age man by lying about her real age of 17, a man on the subway touches himself in front of two teenage girls
Nudity:
No explicit nudity but a female’s midsection is shown a few times while getting sonograms and rear upper back while changing into a hospital gown
Alcohol Use:
Some drinking beer shown and some underage drinking occurs
Smoking and/or Drug Use and Abuse:
Cigarette use shown rarely, plus a teenage girl drinks liquid medicine to help her sleep;
Miscellaneous Immorality:
Very strong miscellaneous immorality and problems includes family dysfunction as a teenage girl and her stepfather are shown to have a pretty destructive relationship, multiple examples of stealing as a girl steals cash from her work to help her cousin make a trip to New York for an abortion, and two teenage girls walk underneath subway turnstiles because they have run out of money, two teenage girls lie to their parents in order to travel across states without the knowledge of their parents, a girl lies about her age to a young man because she’s only 17, and strong moral relativism.

The movie opens in a small town in Pennsylvania, where a 17-year-old girl named Autumn lives, goes to school and works at the local grocery store. During the school talent show, where Autumn tries to sing a song, a boy in the audience shouts, “Slut.” After the school talent show, she and her family are eating at a local pizza place, but Autumn isn’t hungry. She has been feeling sick for a few days now. Her mother suggests she go to the doctor, but Autumn declines. Of course, it doesn’t help that the boy from the talent show is also at the pizza place. Also, her stepfather seems openly hostile.

However, the next day Amber gets ready for school as usual, but, instead of going there, she heads to a clinic. She has a consultation with a doctor there, before going into the bathroom and self-administering a pregnancy test. Although the doctor informs her that sometimes the tests can be false negatives, there is no question about the results of her test, which is 100% positive. The doctor sends her home with a few pamphlets about her pregnancy, adoption and the role of a father.

Autumn returns a couple of times to the clinic to get a sonogram and talk about her options. The doctor tells her that there are so many couples that are unable to have children with whom she would be able to connect her, and then shows her a disturbing video about abortion. Autumn learns, however, that Pennsylvania laws don’t let children under 18 get an abortion without their parents’ consent.

Autumn doesn’t know what to do. All she knows is that she is definitely not ready to be a mother. At work in a grocery store, while scanning people’s items one by one, she suddenly feels like she’s going to be sick. Her cousin, Skylar, who works at the store with her, sees her run to the bathroom and runs after to help her. She tries to help Autumn as she pukes into the toilet, and then she finds out the real truth that no one else knows. Skylar tells their boss that her cousin needs to go home, but he won’t let Autumn go, because she’s scheduled for another two hours.

While checking out her register, Skylar counts the bills, putting every other $10 into her pocket. When they leave for the night, she sticks the money into Autumn’s backpack, and they head home to pack. They throw some clothes into a suitcase, buy a couple bus tickets online, and set out. They each tell their parents that they’re staying at the other’s house that night, and they ride all the way to New York City to see if Autumn can get an abortion at a clinic there.

On the bus, a young man seems to be paying close attention to Skylar and gives her his number for a party later. Although she’s obviously not interested, she takes it anyway, and they all part ways.

Upon arriving at an abortion clinic, Autumn is required to take a new pregnancy test, and she finds out she’s actually 18 weeks pregnant, and not 10 like she was told before. Because that particular clinic doesn’t operate on pregnancies in the second trimester, she’s told she can be seen at a different office tomorrow. Autumn reluctantly accepts that appointment, and she and Skylar spend the night walking around town, riding the subway and playing arcade games. The next day, she’s able to meet with a clinic that will do the procedure for her, but it will be a two day process, and if she uses her insurance, her parents will receive a statement of the documents.

Now, she and her cousin are stuck in the city for another night with no place to stay and no money, because now they have to use the rest of their cash to kill Autumn’s baby at the abortion clinic. Without any other option, Skylar text messages the guy from the bus. He comes to meet them and takes them bowling and buys them beer. Autumn is miserable as he openly flirts with her cousin, and she is dealing with some bleeding and discomfort from the first half of the abortion procedure.

After a long night, Skylar tells this guy their situation, and how they need money for bus tickets home. They leave Autumn for what seems like forever, and she finds them kissing behind a pillar, although for Skylar, it’s more of a duty. Later, he gets money from an ATM and hands it over, because they promise to return his loan back in full. Finally, they head back to the abortion clinic to complete the murder of Autum’s baby, but before she can do this, she has to answer a series of questions with a counselor, answering either “Never, Rarely, Sometimes, or Always.”

This pro-abortion drama is a quiet, slice of life type of movie, with minimal dialogue and a “realistic” style on what could have been a much more dramatic storyline. The director, Eliza Hittman, continues this same style in her other two movies, BEACH RATS and IT FELT LIKE LOVE, as well as uses people who have no previous acting experience. Sidney Flanigan, who plays Autumn, is marking her first acting credit with NEVER RARELY SOMETIMES ALWAYS. The movie’s performances are all very natural and down-to-earth. As a result, each scene develops in the most “realistic” way possible. The scenes showing the close friendship between the two teenage cousins are the best and most emotionally effective.

However, NEVER RARELY SOMETIMES ALWAYS has a very strong, though sometimes subtle and passive, Romantic, politically correct, radical feminist, anti-male, immoral worldview promoting easy access to abortion murder for teenagers and young adult women. The main character kills her baby at 18 weeks, or four and a half months, a time period that only a few abortion clinics cover, even in more left-leaning states like New York (see https://www.lifenews.com/2019/02/04/8-states-now-allow-killing-babies-up-to-birth-after-new-york-legalized-all-abortions/). The movie’s female director clearly wants to change that fact. She also seems to have an antipathy toward anything that smacks of masculinity. Her movie also contains sexual references, brief foul language, some bloody situations, and light substance abuse. NEVER RARELY SOMETIMES ALWAYS is a morally abhorrent, disgusting, unacceptable piece of filmmaking that needs a stronger plot.