ADVENTURES OF A MATHEMATICIAN 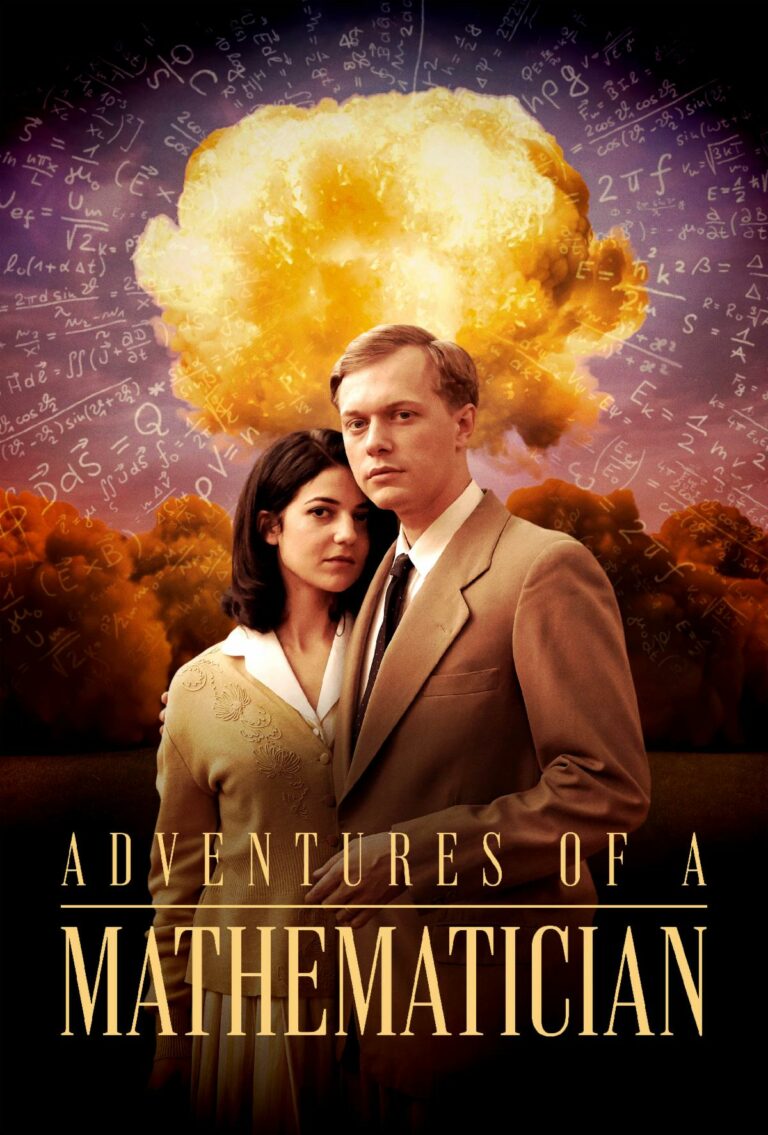 ADVENTURES OF A MATHEMATICIAN is a fascinating period drama. Based on parts of an autobiography, it focuses on Stanislaw Ulam, one of the greatest mathematicians of the 20th Century. Stan is a Polish scientist at Harvard in 1941, who becomes involved in the development of the atom and hydrogen bombs during World War II and the Cold War. He marries a beautiful Jewish immigrant from France. Stan also takes part in the early development of computers with his best friend, a Hungarian mathematician who built some of the first modern computers.

The writer/director keeps the drama in ADVENTURES OF A MATHEMATICIAN low key, though the stakes couldn’t be higher. However, the movie is dramatic, compelling and moving enough and presents a vivid portrayal of major scientific figures in the 20th Century. The movie has a light humanist worldview overall because God is mostly absent from the movie. However, ADVENTURES OF A MATHEMATICIAN has strong moral, pro-family elements. It promotes marriage, family, asking moral questions, and fighting totalitarian socialist regimes. MOVIEGUIDE® advises caution, because of brief foul language and a slightly lewd joke.

(H, BB, ACAC, P, L, S, A, D, M):
Dominant Worldview and Other Worldview Content/Elements:
Light humanist worldview overall (the protagonist is a known agnostic though the movie doesn’t specifically bring that up despite its apparent agnostic tone) but with some moral, pro-family and pro-life sentiments where marriage and family are supported, God is mentioned once, man after witnessing the test of the first atomic bomb mentions the awesome “divine power” displayed by the weapon, and people discuss and question the morality of developing nuclear weapons and the dropping of the second atomic bomb on Japan (protagonist eventually and correctly decides that working on the super-powerful hydrogen bomb might ironically help prevent it from being used), and with brief overt expressions of anti-totalitarian attitudes toward Nazi Germany’s murderous socialist regime and the Soviet Union’s murderous socialist/communist regime, plus America is seen in a positive light because it offers foreign scientists and other immigrants fleeing oppression a chance to continue their work and live a good life
Foul Language:
Four obscenities (one somewhat mumbled “f” word) and one OMG profanity
Violence:
No depicted violence but there are a few non-violent mentions of the Holocaust and war (there’s brief talk about a sister and two parents being killed by the Nazis) and man visits man with terminal cancer at the hospital and later cries when his friend dies
Sex:
No sex scenes but a joke is told about sex where a man asks a rabbi if sex is work or pleasure, and the rabbi says, “Sex is pleasure. If sex were work, my wife would leave it to the maid,” and the protagonist’s younger brother appears to be living with his girlfriend, though it’s not clear
Nudity:
No nudity
Alcohol Use:
Some alcohol use
Smoking and/or Drug Use and Abuse:
Smoking but no drugs except for a hospital scene where a man is getting some kind of medicine drip; and,
Miscellaneous Immorality:
Lying in one scene, it’s mentioned that one scientist working on the first atomic bomb has disappeared and defected to the Soviet Union, and two brothers have an argument.

ADVENTURES OF A MATHEMATICIAN is a fascinating period drama about a Polish scientist at Harvard who becomes involved with the development of the atom and hydrogen bombs during World War II and the Cold War and who takes part in the early development of computers. ADVENTURES OF A MATHEMATICIAN doesn’t tell a highly dramatic story, but it’s dramatic, compelling and moving enough to give moviegoers a vivid portrayal of major scientific figures in the middle part of the 20th Century, with a caution for younger viewers.

Based on an autobiography, the movie focuses on the life of Polish mathematician Stanislaw Ulam during the 1940s and early 50s. Of course, Stan Ulam’s 1976 autobiography, which was republished in 1991 with new material, deals with much more than just this period of Ulam’s life. It also deals with Ulam’s early life in Poland and Europe and his life after his best friend in America, the great Hungarian mathematician John von Neumann, died in 1957.

The movie starts in 1941 at Harvard University in Boston, where Stan is a professor and his 19-year-old brother, Adam, is getting ready to attend his second year at Brown University in Rhode Island. Stan and Adam are worried about their parents and their sister, who are still stuck in Poland. Stan tries to make several phone calls to their sister, but only manages to get hold of her once. Meanwhile, at a party he meets Francoise, a beautiful 23-year-old Jewish immigrant from France who’s majoring in literature.

In late September, Adam and Stan find out that Hitler has invaded Russia and Poland, putting their family’s lives in danger. Stan soon asks his friend, Johnny van Neumann, the Hungarian mathematician, to get him a job in the war effort. Johnny manages to get an invitation to join a secret project at Los Alamos, New Mexico. However, only wives and children are allowed. So, Stan will have to go there without his brother, but he asks Francoise to marry him. At first, she refuses, but the movie cuts to the newly married coupe arriving at Los Alamos.

There, Stan is assigned to work on the hydrogen bomb, or “super” bomb, with Edward Teller, while other scientists work on the atom bomb. Stan and Teller don’t get along, however, because Stan believes that the math doesn’t support Teller’s idea for making the hydrogen bomb work.

During his time there, Stan becomes closer friends with Johnny, who also works at Los Alamos. Stan becomes involved working with Johnny’s digital computers, which not only was crucial to making America’s hydrogen bomb work but also the development of future computers. Stan soon learns from his brother, Adam, that the Nazis have killed their sister while she was trying to escape from Europe with their nephew and another woman. In addition, their parents were killed during the Nazi invasion of the city where they were living. Happiness enters Stan’s life, though when his wife has a baby girl, which they name Claire. Eventually, however, some of the scientists at Los Alamos start having moral qualms about their work, especially when America drops a second atomic bomb on Japan.

Just after Japan’s surrender in August 1945, Stan and his family leave Los Alamos so Stan can become a professor at the University of Southern California in Los Angeles. In early 1946, however, he suffers a brain inflammation, which puts him in the hospital. Stan starts to doubt whether his mental faculties are the same as before. This leads to some frustration on his part and some tension in his marriage. So, the question becomes, will Stan recover his mental, emotional confidence and keep his place as one of the greatest mathematicians of his age?

Writer/Director Thor Klein keeps the drama in ADVENTURES OF A MATHEMATICIAN low key, though the stakes in the movie couldn’t be any higher – America’s efforts to defeat Nazi Germany and Imperial Japan, and, later, its efforts to stop the Soviet Union from being the sole nuclear power in the Atomic Age. However, the movie is dramatic and compelling enough to deliver a fascinating, vivid portrayal of some of the leading scientists behind America’s development of the atomic and hydrogen bombs. It also gives a vivid portrayal of two scientists behind the development of modern digital computers, the protagonist, Stanislaw Ulam and his best friend, John von Neumann. As a result, there are some moving, dramatic scenes between the scientists, between Stan and his younger brother, and between Stan and his wife, Francoise, and his young daughter, Claire. In effect, the movie not only documents the start of the Atomic Age; it also documents the start of the Information Age.

ADVENTURES OF A MATHEMATICIAN has a humanist worldview with some brief foul language. In one scene, Stan wonders about Johnny’s fascination with the Catholic Church, but the movie doesn’t otherwise deal with Stan’s agnosticism. Reportedly, Stan later in his life said he was agnostic because he couldn’t understand why a God would let so much evil and misery into the world. Of course, if one understands that most of the human race has decided to reject the Bible, the Word of God Written, and to reject Jesus Christ, the Savior of the World who represents God the Father on Earth and sends the Holy Spirit to empower the children of God with the light of God, one could just as easily ask, why is there so much good in the world? After all, despite the global spread of human evil, millions and billions of people around the world fought to stop Nazi Germany, Imperial Japan and Soviet Russia.

Though it eschews ADVENTURES OF A MATHEMATICIAN also contains some strong moral, pro-family elements, however, in addition to its rejection of the totalitarian, genocidal regime that was Nazi Germany. For example, in asking questions about the morality of developing nuclear bombs, Stanislaw Ulam, the movie’s protagonist, ultimately decides intuitively that developing a “super bomb” like the hydrogen bomb could have a deterrent effect on the use of nuclear weapons. In fact, though the movie doesn’t use the words, Stan came to believe in the concept of “Mutually Assured Destruction,” which reportedly was created by his friend, von Neumann. Mutually Assured Destruction is a philosophy about using nuclear weapons that actually has saved humanity from destroying itself for 76 years. Also, though their marriage started off as a marriage of convenience, ADVENTURES OF A MATHEMATICIAN depicts a loving marriage between Stan and his wife. In addition, the movie sides with anti-totalitarian attitudes toward Nazi Germany’s murderous socialist regime and the Soviet Union’s murderous socialist/communist regime. Several characters express this attitude during the movie, though not in a didactic, overwrought manner.

ADVENTURES OF A MATHEMATICIAN does contain some brief foul language. Also, Stan’s best friend tells a light sexual joke in one scene. So, MOVIEGUIDE® advises some caution, especially for pre-teenage children. See our CONTENT section for more details.

Watch ADVENTURES OF A MATHEMATICIAN: