The Biggest Mistake I’ve Ever Made! 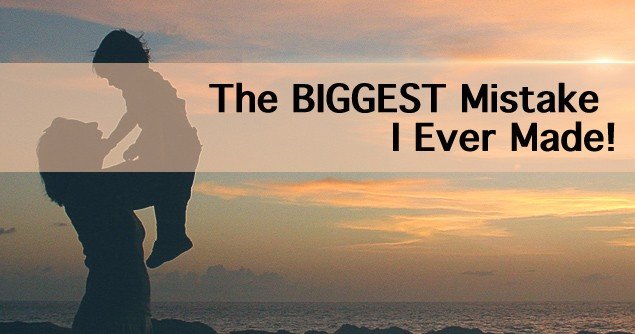 The Biggest Mistake I Ever Made!

Editor’s Note:  As Mrs. Wiens notes in the following article, the American culture was transformed in the 1960s and 1970s when God, prayer and the Gospel of Jesus Christ were banned from the public schools in 1962 and when the church pulled out of Hollywood in 1966. MOVIEGUIDE® supports putting voluntary prayer back in the public schools, but our focus is on putting God, prayer, church, Jesus Christ, and Christian, biblical values back into Hollywood and America’s movies and television programs. We also support husbands and wives having more than two children. As Hollywood once noted in a couple popular movies, they come cheaper by the dozen!

I have two children, my son Ryan and daughter Stacy. My son lives in China now, so whenever the holidays come it’s just my daughter’s family, my husband and me.

I remember when the family of four siblings in which I grew up got together with all our children. It was crazy, but crazy fun with a million presents, food, and children. My children remember how much fun it was with all their cousins. And, it’s not only Christmas that is more fun with more family – the same goes for birthdays, anniversaries, Thanksgiving, Easter, the Fourth of July, and all the Memorial days for picnics.

I say that my biggest mistake was not to have more than two children. I wish I had three at least. So, why didn’t I have more?

In the 1960s and ‘70s, many alarmist groups were saying (falsely) that the world would run out of food to feed its expanding population. At the same, the culture was being transformed. For example, God, prayer and the Gospel of Jesus Christ, including the teaching of such things like the Golden Rule, were banned from the public schools in 1962, the Playboy culture gained widespread acceptance in America along with the birth control pill, the church in 1966 pulled its influence out of Hollywood (which was America’s, and the world’s, most popular entertainment), and many people in the younger generation became enthralled with radical politics and rejected traditional biblical values. Thus, it was suggested that families only have two children, especially since we now had a choice of how many pregnancies we wanted.

Because of that self-centered thinking, most families began having only two children. I even remember thinking how shameful it was to have so many babies.

As you age, you figure out what life is really about. You see the joy and fulfillment family brings. Each child is special and brings a meaningful addition to your family.

We had 10 years of marriage before we had kids.

I was born in the 1940s, and we got married in the ‘60s; but because of the pill, we did not have children for 10 years, until the 1970s. That was almost unheard of in generations past.

We seriously thought about not having any children at all, but about age 30, I saw that we both were getting pretty spoiled. We had what we wanted, a lifestyle that was all about us, and that was the problem: it was all about us. It was nice, but not fulfilling. I grew tired of my own “it’s all about me” attitude. So we decided to start a family. I have never regretted leaving that life style of freedom of interruption for the rewards and chaos of life with children.

Family is the center of life. Those relationships, that family support – the love, affirmation, respect, caring, support system when someone is ill, has lost their job, needs a helping hand, help when a financial crisis comes, when you need a loan, or need to borrow a car – that is what family is about. Family is there like no one else.

Why have more than one child? Because growing up is boring without having siblings. It’s with your siblings that you learn how to share, how to give to others, how to fight, how to support each other, how to compromise, and come to the rescue for each other. If there is only one child, vacations and trips can be boring with only your parents to play with. In a one-child family, the two parents are so totally focused on one child that it may be intense for that one child to have all that pressure and attention. All the parents’ hopes and dreams are on the shoulders of that one child. When the parents are old it is a hardship for the one child to take care of them. One child is better than none, but more children in a family is more fun – maybe more chaotic, but still more fun.

See, the relationship between parents and a child is special, but the relationships between brothers and sisters are just as special. After my sister died, I was glad I had two more brothers to be there for me. We have so much invested in each other. We have so many memories of fun times, of working together and praying for each other during the hard times. We have memories of health issues, loss, and grief now that both our parents are gone. We all need someone in our corner – family is that.

Yes, there have been times when there were issues between my siblings and myself, but we forgive and move on, because they are family.

Aging parents need assistance as they get old. It is easier if the load is carried by more than one or two children.

There were four of us kids in my family, so when my mom died, and my dad was in his late eighties, there were four of us to share him around. He lived with each of us for a month and then went to another of his children. It worked out well for all of us, but if there had only been two of us, it may have been more of a hardship. If there are financial issues with a parent in their later years, it is also easier if there are more children to share the financial burden.

So why didn’t I have more children?

Grandchildren are the best-kept secret!

Grandchildren accept and love you unconditionally, and each one is a treasure. I love to hear them yell across the parking lot at church, “Nana! Nana! Nana! We are here!” Or, the times they put their little hand in yours, or the times they fall asleep on your shoulder and snuggle up close under your chin. The way they light up when they see you. What joy and meaning they bring to your life. Tucking them into bed when they stay overnight, the fun pillow fights we have, the gingerbread houses we make, and the Easter egg hunts are all moments I treasure, made possible through having children, and then my children starting families of their own.

God said to multiply. It puts a smile on his face to see life go on with each birth. Maybe if we had not had children, my husband and I might have more money or more traveling or more toys, but those silly treasures would pale in comparison to what we have today. Truthfully, there is no comparison!

Today, my life is rich with family.

It is rich with memories of awesome times and fun-filled days. To think I was most worried that we would have to give up travel if we had children. But, even with children, we did travel a lot: Hawaii, Mexico, all over Europe, England, China, Haiti, Africa, Canada – and most trips were with our children and now grandchildren. Children add more value to life.

The rewards and purpose in life are so much more fulfilling with children.

My husband and my life with children is worth so much more than anything we may have given up in material possessions, if we hadn’t had children. The best choice we made in life was to have children, but if I were to do it over again, I’d have had three at least. Children are your legacy.

What you instill in your children will go on in many generations to come – the good in you and the bad in you!

With that in mind, if you can’t raise children in a safe, loving, caring environment, then it is worth it to wait. However, I urge you to consider the blessing of having children and raising a family in a Godly way.