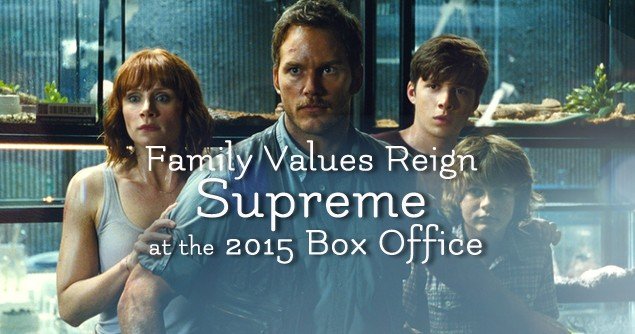 The media has been making a big deal in the past weeks about the box office success of the movie “Straight Outta Compton,” a hagiography about a foul-mouthed gangsta rap group, but, according to box office stats, it’s family values that reign supreme at the box office so far.

So reports Dr. Ted Baehr, founder and publisher of Movieguide®:  The Family Guide to Movies and Entertainment.

Dr. Baehr reports that, as of this week, seven of the Top 10 Movies at the Box Office in the United States and Canada, preach strong pro-family messages of family values.

In fact, in the biggest movie at the box office, “Jurassic World,” Dr. Baehr notes that the lead female character learns the lesson that family should come before career and profit. In the No. 2 movie, “The Avengers:  Age of Ultron,” the Avengers learn that one of their comrades, Hawkeye, has a wife and two children that he’s fighting for and keeping safe from harm.

Also, during the No. 3 movie at the box office, “Furious 7,” the hero, played by Vin Diesel, is trying to help his wife regain her lost memories of the love they share.

“At the end of the movie,” Dr. Baehr adds, “Vin’s character honors the life of his best friend, who happens to be the loving husband of his sister.”

Family values, and other Christian, morally uplifting virtues, also take center stage in such Top 10 movies as “Inside Out,” “Cinderella,” “Home,” and “Ant-Man,” Dr. Baehr said.

Finally, Dr. Baehr noted that none of these seven movies had any graphic sex or nudity and had either no or only limited foul language.

Movieguide®’s upcoming 24th Annual Faith & Values Awards Gala on Feb. 6, 2016 will honor the best, most family-friendly movies and television programs honoring God and inspiring audiences with messages of faith, hope, goodness, justice, redemption, forgiveness, and true divine love. At the Awards, Dr. Baehr presents highlights from Movieguide®’s Annual Report to the Entertainment Industry, a comprehensive financial analysis of the movie business showing that Christian, family-friendly movies make the most money at the box office and on home video.