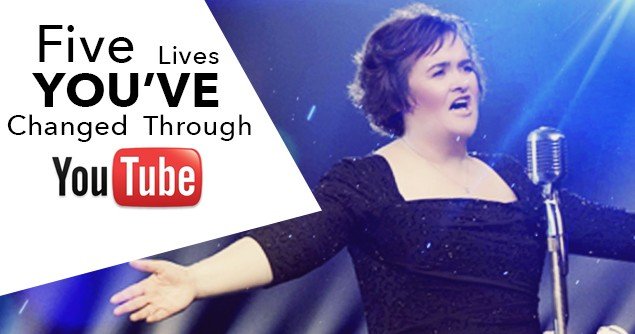 Remember that video you shared a while ago of the Auburn ball boy with incredible speed? Those are some of many videos that have gone viral. What most people don’t know is that viral videos like those you helped share actually changes those people’s lives! Here are a few people whose lives have changed since they went viral.

Though the English singer first appeared on the TV show BRITAIN’S GOT TALENT and ended up second place in the competition, her worldwide fame was due to the YouTube video that went viral. Her charm and soothing voice won over the world and has since sold over 19 million albums worldwide.

Before he was a worldwide celebrity, back when he got into less trouble, Justin Bieber posted videos on YouTube of him singing and playing the guitar. Talent scout Scooter Braun came across one of the videos, and the rest as they say is history.

Remember that terrible song that redefined Friday’s forever? Even though it garnered universal disdain and was temporally removed from YouTube because the video received so many dislikes, 17-year-old Rebecca Black is doing quite well for herself these days. Now releasing frequent YouTube videos, Rebecca has more than one million channel subscribers.

Being from Nebraska, I may be biased, but I’m pretty sure everyone was moved by Jack Hoffman’s story and how one college football team stood together against childhood brain cancer. Since the video has gone viral, 9-year-old Jack, along with his favorite football player Rex Burkhead, has met with President Barack Obama, raised money for the Team Jack Foundation and even inspired Senator Deb Fischer to raise awareness of pediatric brain cancer. Jack is still struggling since a tumor was found on August 5, 2014, so please keep him in your prayers.

Another story that warmed our hearts was that of Sarah Churman who, after receiving hearing implants, was able to hear her voice for the first time, and we got to see her reaction. Though she admits that celebrity hasn’t changed her, in between interviews, she’s written a book titled THE JOY OF HEARING RAIN.

The Internet Age has made our lives more simple and complicated simultaneously, but the opportunities at our fingertips are endless. Just like movies, videos affect people. Let’s share the ones that uplift and inspire. Who knows, maybe clicking that share button makes a difference after all.