Mixing It Up with Sly and the Gang: Behind the Scenes of THE EXPENDABLES 3 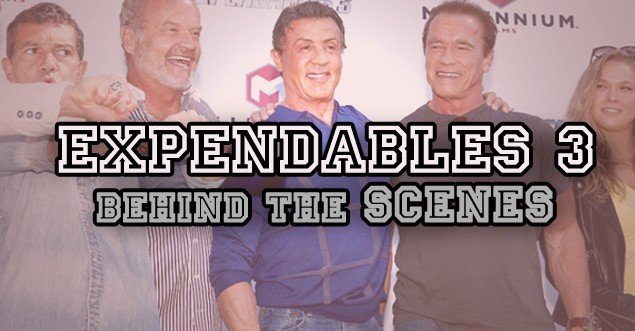 Several actors have starred in three or more movie franchises, but there’s only one star we can think of who actually created three of the franchises in which he starred, and that’s Sylvester Stallone, the creator of the ROCKY and the RAMBO movie series.

Stallone, 68, sounded like a human Energizer Bunny while talking about his new movie and his career at a recent press conference in Los Angeles.

“Age is a state of old mind,” Stallone said. “It gets to a point where, if you get old enough, you forget how old you are, and that’s the best thing….

“I’m not ready to sit at home and play with my Pomeranians 12 hours a day,” he added. “I’m just not ready. Remember in old vaudeville, there was a cane that snatched you off the stage? Well, I’m waiting for that. Actors don’t want to retire. They’re usually forced to retire, and that’s a sad thing because you really do get better as you get older. You may not remember as much dialogue [but] what dialogue you do remember, you’re better at it. We’re just all children. We’re there to perform, and when that’s taken away. . . I’ve always said the artist dies twice. And, the first death is the hardest, which is the career death, the creative death. . . . So, I just think everybody should just keep going.”

Stallone and some of the other actors starring in EXPENDABLES 3 discussed what it was like working with each other.

“It was a great opportunity to work with some of the best actors that I’ve always admired,” Wesley Snipes said.

Snipes added that it was also great to “act a little crazy again” after being away from movies because of some troubles with the IRS.

Stallone and Mel Gibson, who plays the villain in the new movie, were asked what it was like doing the big fight scene between their characters at the end of the movie.

“Mel is a great actor,” Stallone said. “He’s very fast, very strong, and it was great being punched by him.

“It was fun being shot full of holes by Sly,” Gibson joked.

“There were a lot of characters,” Gibson said about his first impressions on reading the script. “I didn’t know how they were going to jam it all in, but somehow they managed to do it, and everybody got a fair shake, and there’s a lot of people here. So, hats off to Sly for enabling that to happen.”

Harrison Ford co-stars with Stallone, Gibson and Snipes in EXPENDABLES 3.

“Harrison is very intelligent and funny, very funny, very witty and dry humored,” Stallone said. “Harrison is special, very unique. He can bring a lot to a scene with minimal effort.”

“At first, there was a surprise that Kelsey Grammer was going to be on this ride, but I’m tougher than a lot of people think,” Grammer (of TV’s CHEERS and FRASIER) said. “If you know anything about my personal life, you’d realize that. I’ve always wanted to work with Sly. I love working with Sly. It was a revelation to me in terms of just how smart and how improvisational Sly can be as well. And, generous with his time and generous with his acting. I just had the best time ever. . . and I’ve been impressed ever since. I hope [my character] comes back. I’m working out. I’m punching people on the street just to see if I can do it [laughter].”

Stallone remembers how, when he first had some success with ROCKY in 1977, John Wayne just came up to him and said, “Hello, my name is John Wayne, and I want to welcome you to the business.”

“I’ll never forget that,” he said.

Mixed martial arts fighter Ronda Rousey, who plays one of the new Expendables, said, like John Wayne, “Everybody [on the set of EXPENDABLES 3] was just so welcoming and warm. Everyone, really, went out of their way to make me feel comfortable. I couldn’t have asked for a better first project. I’ve always been the one shaking it down with all the guys anyway. I would have felt more uncomfortable if I were in SEX IN THE CITY 4.”

“These guys are all one of a kind,” Stallone said about his cast, both the veterans and the new people. “We’re not coming this way again. You seriously have a real bouillabaisse of talent here, and it’s great to be in the kitchen mixing it up.”

That said, he also joked, “After the fifth EXPENDABLES, you start wearing Dependables.”