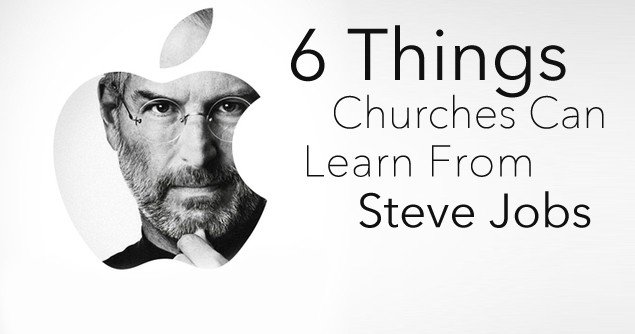 On October 5th, 2011, the world lost a great man. An innovator for his generation, this man redefined technology, defined communication and led the world in a technological revolution. He was the underdog for big business, resurrecting his once dying company on the brink of bankruptcy and with his leadership, leading the world in revenue, monopolizing 65 percent of his market in product sales. Its logo is synonymous with high quality products, good customer service, and technological savvy. Christian churches and their leaders could learn a lot from his example.

What can churches possibly learn from Steve Jobs?

The answer: a lot.

Whether people view him as a positive or negative influence on society, Jobs did something only few people think to do. He not only created a product; he created a culture.

Yet, Steve Jobs’ success did not lie in changing the product. His computers were always good quality, but Jobs knew that in order to turn his company around he needed to not change just the product, but change his audiences’ perception of his products. Jobs created a culture of eliteness, creating an exclusionary group of followers who prided themselves on using products a step above the PCs on the Market. Steve Jobs redefined the computer world by introducing the world to a new way of giving and receiving information. He not only met technological needs in the market, but he convinced the world that they needed his products.

As the body of Christ, we have to offer Jesus in a way that is revolutionary to this new generation—a generation that is longing for community more now than ever. By creating a culture similar to Jobs, unbelievers can connect in a way that helps them understand their need for Him.

I recently perused an article entitled “11 Unusual Ways Steve Jobs Made Apple the World’s Most Admired Tech Company.”1 Based on that article, I draw six distinct parallels between the organization of Apple and creating church culture.

Since its inception, Apple was known for one thing: computers. In a strategy to obtain more funds and keep them afloat, Apple broadened its products, branching to sell items such as music, iPods, iPads and iPhones. It broadened its audience base, dipping into every realm of the new technological age. It created more consumers who were pleased with Apple’s quality.

Steve Jobs quoted Wayne Gretzky in a speech he made to graduates of Stanford University: “A good hockey player plays where the puck is. A great hockey player plays where the puck is going to be.”2 He didn’t plan just for the next year, but instead he envisioned where he wanted to see the company in five and ten years. He pictured where the puck of technology would be and beat Microsoft to the punch. In fifteen short years, he became the frontrunner for new and upcoming products.  Now, Bill Gates races to catch up with him, instead of the other way around.

Churches need to envision where they think the puck will be when it comes to their ministries. They cannot simply plan for the next meeting, but plan for future meetings one, three and five years from now. Creating culture means you carve out a niche for your church in a way that changes the way people think about transformation and discipleship. Leaders don’t institutionalize discipleship. They instead create an entire church culture that sees a value for ministries and can’t function without them.

Some retail stores refused to sell Apple products, so they were not as easily accessible to the public. Jobs solved that by creating Apple stores where people could explore the different models, talk with a “genius” that could help them find the right product to suit their needs and even provide a place where people could come get them fixed if there was a problem.

As a church, you need to discuss possible barriers to people coming to your church and find solutions to those problems so that many people can benefit, not just a select few. This involves knowing the needs of the people around you. Get to know them. Create small groups that fall in line with your members’ passions. Do they have a heart for a specific way to serve in the church? Perhaps your group can train them to serve in that capacity. Do people have a heart for missions? Gather a group and set a goal to raise money for a Missions trip or discover needs in your community you can meet together.

Good salesmen have a gift for selling you something you don’t always need. Jobs possessed that gift. His advertising campaigns tell the consumer his products will add value to their life, even if they were not in the market for his product. His ads emphasize simplicity, superiority in clarity of images, and beauty with very little copy or voiceover. His products boast these values while saying very little.

What do the clothes you wear, the TV programs you watch, or the clubs you belong to say about your church? What culture are you creating you by participating in these things?

Encourage Others to Think Differently

The Apple campaign in the late 90s to “think differently” revolutionized the way the world viewed the company. Soon, they began to broaden their horizons, branching out into the telephone and music world.  Their ability to change people’s views of who they were and change their vision allowed the company to succeed.

As a church, you need to also “think differently.” Don’t be afraid to evaluate if the ministry is meeting the needs of its members or if it is living up to the standards set forth from the beginning. Pray and ask God what He would like the ministry to accomplish. Feel free to deviate from its original purpose if a ministry needs to revitalize itself. Self- analysis helps to keep a church from growing stagnant.

Apple makes people feel like they’re moving forward in life, not backward. They make people’s vision possible and make the impossible attainable with the simple press of a button.

Ministries need to make people feel as though they are moving forward in their walks with God, not backwards. Goal setting helps people to feel as though they will accomplish something they might not have if they had not joined the ministry. Pitch to interested members not what the ministry is, but what it can be with their participation. You need to engage their minds and envision how they will make an impact on the group in order to awaken their soul. Awakening a member’s soul is critical.

Steve Jobs in a speech to Stanford said, “Don’t settle.” Your heart and natural passions will lead you in choosing a purpose and help to set goals in a systematic way. The Lord has put specific desires in your heart for a reason. Is there a particular demographic you are trying to reach? Single moms? Teenagers? Go with that. Let the Lord deliver people to you with a similar desire. That will help you figure out how to assemble a ministry (if there isn’t already one) and will help you fulfill the passions in your group. One word of caution: don’t take on your passion alone! That is the quickest road to burnout. Take a year and invest in others that have a similar interest who can help you with accomplishing it.

Churches that are satisfied with status quo continue to do business as usual. Churches that create a culture entice people to come not only once but keep them coming back for more.