Terminally Ill and Eternally Full of Life: ALS Stricken GOD’S NOT DEAD Producer Has A Message For The World 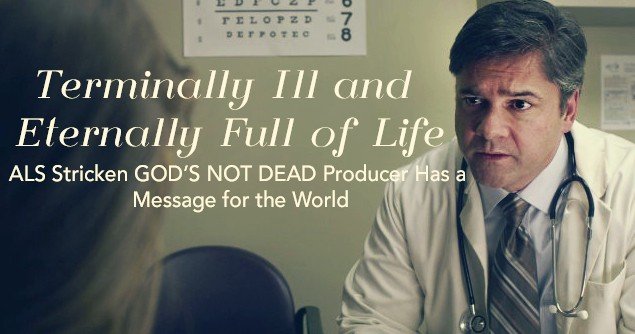 On August 19, as thousands of videos poured over the internet of people participating in the ALS Ice Bucket challenge, creating awareness for ALS, also known as Lou Gehrig’s disease, one video especially inspired many.

Russell Wolfe is a producer for the recent hit GOD’S NOT DEAD and many other Christian movies. Recently diagnosed with ALS, Russell took to Facebook to contribute to spreading awareness and raising money for scientific research of the incurable disease.

Regarding the Ice Bucket Challenge, Russell told Movieguide®, “So few people even know of the disease or even know what it is. I think it’s done a great job at raising awareness for that, but I felt that it was particularly good to link it to the fact that God’s not dead, mainly because I have faith that I’m healed, and I’ll receive that manifestation of that healing. Maybe there are some people I can encourage along the way.”

Encourage people he did. Within a week, his Ice Bucket Challenge had been shared over 34,000 times and over 3,000 comments flooded in with encouragement, prayers and others with ALS stories.

Moved by the huge response to the video, Russell said, “One thing that speaks specifically to me is the outpouring of people and their prayers. I’m so grateful for that. I’m actually taken back by how much it was shared, and how many people have included me in their prayers.”

When the news of his terminal diagnosis was revealed to him, Russell said his doctor was more surprised than he was because of Russell’s demeanor.

“I was so calm in reaction to the news,” Russell explained. “I’ve been through a lot of storms in my life, and God has certainly delivered me from each one. When I’ve had things that have happened that are bad, at the time, they might have seemed disastrous, but God has turned each and every one of them around so that in retrospect, I can look back at those, and I’m thankful that they happened, and I don’t feel any different about this. So when he gave me the news, I just looked at it as an opportunity to stand in my faith, and now we’ll just see God uses this for his Glory.”

Romans 8:28 is a special encouragement to Russell, because God’s work and plan for his life is already so apparent.

“A part of the movie [GOD’S NOT DEAD] is sort of ironic, not only that I play the doctor that was delivering terminal news, and then I received that [same news] thereafter, but the letter that was in the movie that Kevin Sorbo read.

When we had the script, I felt that there needed to be a bridge between him being a solid atheist, and then converting to a Christian on the screen. So, I felt that while he was sitting in his office, he could pull out a letter from his mother. So, I wrote that letter. The idea behind that was, what would I tell my kids if I knew I was going to die at a young age? That letter that’s in the movie, I wrote it in that perspective. Again, the irony of writing that letter, and then getting a terminal diagnosis expresses the way I felt at that time and feel now knowing that I have this diagnosis.”

With his health deteriorating, Russell is still full of encouragement, faith and hope.

As he says, his message “is that God didn’t give this [ALS] to us. God didn’t give me ALS. I believe we live in a fallen world, and as such, bad things happen to good people. . . . What I do believe is that God can take any of those bad things and turn them into good. My message is to keep your faith. God is good all the time. He will turn things that are bad to the good. So, look for the hope in that.”

Pray for Russell Wolfe, his family and the thousands of others that suffer from ALS. Pray for physical healing through miracles and scientific advances through medicine, but especially, pray for a spiritual healing for all those who don’t have a personal relationship with Jesus Christ.