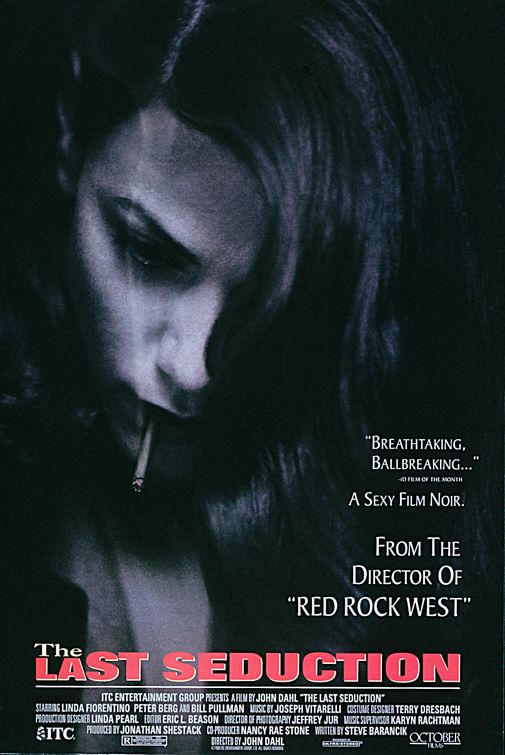 Bridget Gregory convinces her husband to take part in a dangerous drug deal, then steals the money and leaves for another town. There, she seduces another man and ultimately leaves him embroiled in a cold-blooded murder. THE LAST SEDUCTION is truly a black comedy in which the anti-heroine redefines evil to include not only the desire to destroy but the inability to make any distinction between right and wrong.

(NA, LLL, VV, SS, NN, A, D, M) Nihilistic view of mankind with evil revealed as such, although evil is ultimately victorious; 55 obscenities & 10 profanities; 2 murders (1 in an auto accident, the other by poisoning/suffocation, neither is graphic), man slaps wife, & rape depicted; numerous acts of fornication both implied & depicted, though not graphic; partial male & female nudity; alcohol use; drug dealing; and, cigarette smoking.

In THE LAST SEDUCTION, Linda Fiorentino portrays Bridget Gregory, a cold-hearted woman who convinces her husband, Clay, to take part in a dangerous cocaine deal to pay off a debt to a loan shark. After the deal, she leaves New York City with the cash and hides out in small-town Beston, New York. There she meets and seduces local boy Mike, who sees her as his ticket out of small-town life. Caught in a purely sexual relationship with Bridget, Mike is unable to see the degree of her manipulation of him, and so he is finally dragged into a cold-blooded murder plot.

THE LAST SEDUCTION is truly a black comedy in which the anti-heroine redefines evil to include not only the desire to destroy but the inability to make any distinction between right and wrong. A tautly-crafted thriller that just misses being first-class by some minor convenient plot devices. THE LAST SEDUCTION illustrates how trusting the wrong thing or person can be a mortal error. The film’s portrayal of this calculated woman is chilling, illustrating the ability of one person to completely use those around her to her own advantage. Although it adds to the overall portrait of characters desperately in need of values, the foul language is non-stop and vulgar. However, the necessary sexual scenes and violence are not excessively exploitive or graphic.