"Using Art to Get the Girl of Your Dreams" 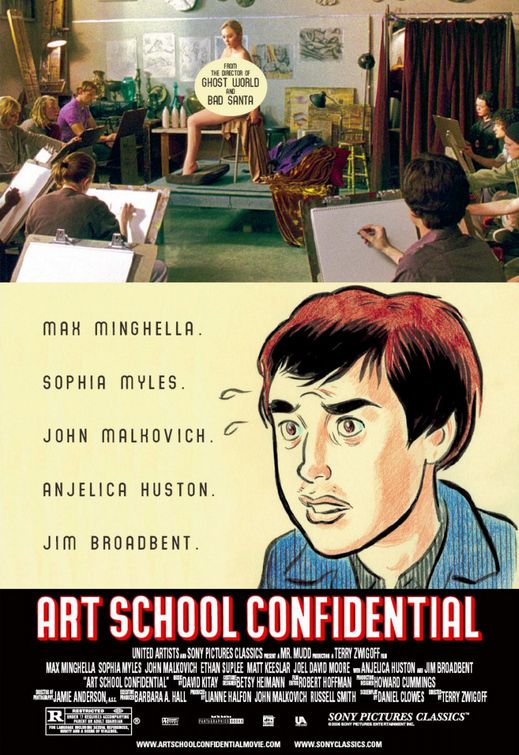 ART SCHOOL CONFIDENTIAL is an independent comedy satirizing the contemporary art world. The movie is set at a prestigious art college in New York City, where Jerome, an earnest freshman, desperately wants to succeed as a great artist. He falls for a beautiful woman, Audrey, who poses nude for Jerome's art classes. Audrey's head is turned, however, by a preppy Jonah, whose pop art concoctions win praises. Meanwhile, Jerome's more traditional drawings and paintings earn the scorn of practically everyone. In the midst of all this, the campus is abuzz with a series of murders by a killer who strangles people. A couple suspects present themselves, including Jonah, but Jerome also gets mixed up with the case.

The characters and story in ART SCHOOL CONFIDENTIAL are very entertaining. A good cast with some veteran actors helps a lot. The best, most thought-provoking aspect of ART SCHOOL CONFIDENTIAL is that it asks the question, What is art? The movie also has some other positive moral elements. Despite these positive elements, the movie contains explicit nudity, crude sexual dialogue, some violence, a mixed pagan worldview, and an excessive amount of strong foul language.

(PaPa, Ro, BB, Ho, LLL, VV, SS, NNN, AA, D, MM) Strong pagan worldview with Romantic aspects where frustrated protagonist resorts to achieving his personal goals by problematic or immoral means, mitigated by some strong (overall) moral elements regarding the phony and cutthroat world of the contemporary art scene, an implied validation of honest, traditional representative art, and protagonist and his arch-rival bury the hatchet at the end, plus homosexual elements where effeminate man seems to be in denial about his homosexuality and is later shown in bed with another man; at least 98 mostly strong obscenities, nine strong profanities, nine light profanities, and boy draws picture of bully getting toilet water and feces dumped on him; strong violence includes unknown man strangles woman, paintings of strangled victims, talk about a serial killer that hasn't been caught yet, off-screen fire said to kill several people, lightly violent images from movie that a student is shooting, fight for movie is interrupted by police and actor says his arm has been broken; strong crude references to sex in dialogue, minor male character shown in bed with another man and thus implying a homosexual tryst, and undercover policeman dates unmarried woman and later is revealed to be married; upper and rear female nudity as woman poses for art class, and full male nudity when man poses for same art class and when fully nude man approaches one of the female students when class takes a break; alcohol use and one character is an alcoholic who's angry at humanity; smoking cigarettes; and, lying, betrayal, misanthropy, art snobbery rebuked, .

ART SCHOOL CONFIDENTIAL is an independent comedy that satirizes the contemporary art world.

The movie is set at a prestigious art college in New York City, where Jerome Platz, an earnest freshman, desperately wants to succeed as a great artist. He falls for a beautiful, mystery woman named Audrey who poses nude for Jerome’s art classes. At the urgings of a quirky perennial student at the college, Jerome hesitantly develops a beginning relationship with Audrey. Audrey’s head is turned, however, by a preppy student named Jonah, whose pop art concoctions win the praises of students and teachers alike. Meanwhile, Jerome’s more traditional drawings and paintings earn the scorn of practically everyone. When Jerome criticizes Jonah’s work, and the abstract, pop work of the other avant garde, radical students, they heap even more scorn on Jerome. Even when Jerome tries to be more abstract or cutting edge, they heap scorn on his work.

In the midst of all this, the campus is all abuzz concerning a series of murders by a serial killer who strangles people. Jerome’s quirky friend introduces him to an alcoholic, misanthropic, middle-aged artist, Jimmy, who spouts violent, nihilistic thoughts about the human race. When Jerome quotes the man in class, Jonah comes up to Jerome and tells Jerome that he agrees with Jerome’s violent expressions. Is Jonah the serial killer? Or is Jimmy?

Of course, the answers to those questions leads to several twists and turns.

The characters and story in ART SCHOOL CONFIDENTIAL are very entertaining. A good cast, including Max Minghella as Jerome, Sophia Myles as Audrey, Jim Broadbent as Jimmy, John Malkovich as one of Jerome’s teachers, and Joel David Moore as the perennial art student, contributes much.

The best, most thought-provoking aspect of ART SCHOOL CONFIDENTIAL is that it continually asks the question, What is art? Jerome loves Picasso, but he prefers to paint in a more realistic manner. The art students around him, however, prefer the pop art and avant garde sensibilities of today’s modern art. And, the two art professors he encounters in the movie are either indifferent or can’t be trusted. In the end, the movie gives an ironic answer to the question, what is art? [SPOILERS] Jerome’s work only becomes respected by the art community when he becomes arrested for the local murders. At the same time, however, the girl he wants most finally comes to Jerome after she learns how Jonah has deceived everybody and after she sees the beautiful portrait Jerome has created of her face and shoulders. [END OF SPOILERS] Thus, the movie takes well-deserved potshots at the phoniness of the art community and seems in the end to validate the value of traditional aesthetic sensibilities. There is also a fine scene where Jerome and Jonah bury the hatchet.

Despite these positive moral elements, the movie contains explicit nudity when Audrey and a man pose naked for the art students in one class. There is also plenty of strong foul language, including many “f” words and crude sexual dialogue. Finally, the plot of the serial killer is not resolved positively, and the protagonist’s ultimate goal is not only to become a recognized artist but also to get the girl of his dreams, by almost any means necessary. Thus, the overall worldview seems to be a pagan one, with a Romantic undertone. Ultimately, therefore, ART SCHOOL CONFIDENTIAL deserves an Excessive rating from MOVIEGUIDE(r).