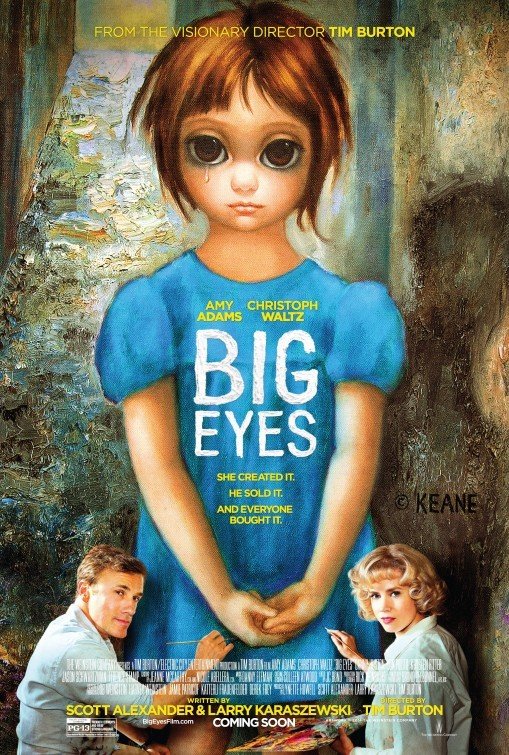 BIG EYES is a biopic directed by Tim Burton about Margaret Keane and her famous paintings that became a phenomenon in the 1950’s. The movie begins with Margaret leaving her abusive husband, Frank, and escaping to San Francisco with their daughter. Making a living doing street portraits, Margaret meets the suave Walter Keane, a painter who compliments her artwork. The two get married. Someone shows interest in Margaret’s unique paintings of children with abnormally large eyes. Walter claims to be the one who painted it so he can make the sale. The paintings become a sensational hit, and Walter’s lies get bigger and bigger.

BIG EYES is a very interesting movie from Tim Burton. It’s also one of the least strange, most entertaining movies he’s done. One can’t help but be empathetic for Amy Adams as Margaret. She delivers a subtle, yet effective performance as a conflicted woman. Sadly, there are some mixed messages in BIG EYES. It has a spiritual dimension that extols honesty and rebukes lying and manipulation, but there’s also a feminist, politically correct tone. So, caution is advised.

(Pa, B, PC, Fe, C, FR, LL, V, S, N, A, D, M) Light mixed pagan worldview with some moral statements against lying, manipulation and deceit, but also some subtle politically correct, feminist elements, but female protagonist does respect the Bible (even though she becomes a Jehovah’s Witness) and at one point says, “Only God could create theses colors”; seven obscenities and eight profanities (including abusing Jesus’s name), plus an obscene gesture; light violence includes husband threatens his wife and even tries to start a fire in a room she’s in, a man is punched; no sexual content, but married couple kiss and married man flirts with other women; no nudity but some female cleavage and women in swimsuits; moderate wine drinking; no drug use, but some smoking; and, lots of lying, manipulation, deceit and illegal fraud, but this is not condoned and is eventually made right.

BIG EYES is a biopic directed by Tim Burton about Margaret Keane and her famous paintings that became a phenomenon in the 1950s and 60s.

The movie begins with Margaret (Amy Adams) leaving her abusive husband Frank and escaping to San Francisco with their daughter. Making a living from doing street portraits, Margaret meets the suave Walter Keane, a fellow painter who compliments her artwork. When Frank threatens to take custody of their daughter because Margaret isn’t a good provider, Walter proposes to Margaret they get married, and he’ll take care of them. Even though she hardly knows Walter, she agrees and the two get married.

One day while trying sell some of his own artwork at a club, someone takes an interest in his wife’s work, a painting of a little girl with abnormally large eyes. In order to make the sale, Walter takes credit for the work. After some strategic press, the paintings start selling off the wall.

When Margaret finds out Walter has been taking all the credit for her paintings, she’s upset, but too soft spoken to do anything about it. Walter says they’re married, so who gets the credit doesn’t really matter, and the money is good.

The big eye’d paintings become a major hit, and Walter smartly starts selling print outs of the unique pictures. Margaret continues to secretly paint while Walter takes all the credit and pulls in a fortune. The longer they do this, the guiltier Margaret becomes for all their lies. Eventually, Walter becomes increasingly threatening, and Margaret is forced to leave him. Years later, she decides to step up and take credit for all her work. Walter and Margaret take the issue to court, where there are a couple very funny scenes.

BIG EYES is a very interesting movie from Tim Burton. It’s also one of the least strange movies he’s done. One can’t help but be empathetic for Amy Adams as Margaret. Amy gives a subtle, yet very effective performance as a conflicted woman. The extremely talented Christoph Waltz also excels in his role as the cunningly smart and eventually despicable Walter. BIG EYES doesn’t stand out like Margaret’s paintings do, but it’s an entertaining movie nonetheless.

BIG EYES has some mixed messages. One can’t help but hope Margaret will find the courage to reveal the truth of her situation. Thus, the movie shows lying, manipulation and deceit in a negative light. That being said, the movie has a subtle politically correct, feminist tone. While Margaret is indeed treated unfairly and unjustly, some parts of the movie seem unlikely and anachronistic. For example, when Margaret’s conscience tells her that lying is wrong, she asks a priest for advice, and he tells her to just “submit to her husband,” without asking her any more questions. For a priest to tell her to disobey God over her husband is both unbiblical and unrealistic in the way it’s portrayed. Eventually, Margaret becomes a Jehovah’s Witness, which gives her a newfound sense of what’s morally right and wrong. It also gives her the confidence to stand up to Walter. BIG EYES also contains some strong foul language, however. So, caution is advised.