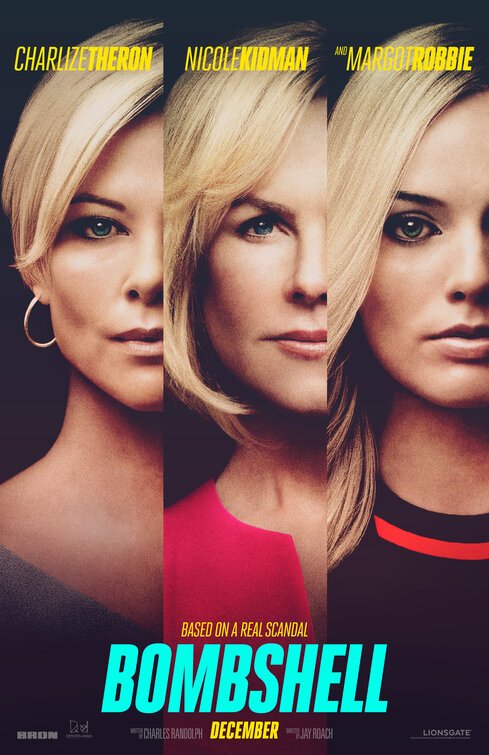 BOMBSHELL is a drama about the reasons behind the Fox News Channel’s firing of long-time CEO Roger Ailes due to accusations of sexual harassment. The movie details the situation behind the firing of Gretchen Carlson by Roger Ailes. Carlson sues Ailes for sexual harassment and for firing her because she refused. As other women come forward, Fox News host Megyn Kelly wrestles with her conscience. Should she talk publicly about a meeting 10 years ago where Ailes tried to kiss her, even though, after the incident, Ailes made no effort to stymie her career? Even if she reveals the story, people will ask why she didn’t speak up before this.

BOMBSHELL has some first-rate performances, especially by Charlize Theron as former Fox superstar Megyn Kelly. Theron gives a spot-on impersonation of the distinctive, talented female news anchor. Her performance helps give weight and authenticity to the movie. However, the movie’s condemnation of sexual harassment is marred by the insertion of a fictional female reporter harassed by Ailes. It’s also marred by lots of strong, gratuitous foul language and some politically correct content.

(B, PaPa, PC, Fe, RH, HoHo, Ab, LLL, V, SS, A, D, M):
Dominant Worldview and Other Worldview Content/Elements:
Light moral worldview condemns sexual harassment in the workplace, marred by strong pagan behavior by good buys and bad guys, some political correctness taking jabs at conservatives and President Trump, some feminist content, some revisionist history, a strong pro-homosexual subplot, and a couple light Anti-Christian elements
Foul Language:
At least 75 obscenities (including many “f” words), 24 strong profanities, 12 light profanities, plus some lewd language and a couple obscene gestures
Violence:
Some possible threats against people and people get angry in a couple scenes
Sex:
Strong pro homosexual content includes implied lesbian scene showing two women in bed afterwards, and multiple crude sexual references, sometimes to oral sex, sometimes to intercourse, often sexual harassment, and a couple references to self-abuse, and married couple wake up in bed while on vacation with their children
Nudity:
No explicit nudity, but older boss makes young woman hike her skirt until you can see the bottom of her underwear
Alcohol Use:
Brief alcohol use
Smoking and/or Drug Use and Abuse:
Brief smoking but no drugs; and,
Miscellaneous Immorality:
Movie takes a jab at Bill O-Reilly a couple times but, in the end, the filmmakers don’t prove any case of sexual harassment by O’Reilly, so the claim at one point that he did borders on slander (being a tough and demanding boss doesn’t make you immoral, by the way).

BOMBSHELL is a drama about the reasons behind the Fox News Channel’s firing of long-time CEO Roger Ailes due to accusations of sexual harassment. BOMBSHELL has some first-rate performances, especially by Charlize Theron as former Fox superstar Megyn Kelly, but its message condemning sexual harassment in the workplace is marred by excessive, gratuitous foul language, a few silly political jabs at conservatives, a scene mocking a minor character’s Christian faith, a fictional lesbian subplot that undercuts the movie’s premise, and strong lewd references.

The movie starts by detailing Megyn Kelly’s mistaken question in the first major Republican debate in 2015 where Kelly focused on Donald Trump’s past relationships with women instead of asking a more pertinent policy question. Kelly’s question backfires on her, making her look like (rightly or wrongly) she’s too biased , and she tries to fix the situation so she can continue doing political stories as a TV reporter and interviewer.

After that, the movie details conflicts between former FOX & FRIENDS co-host Gretchen Carlson, who’s upset that Fox CEO Roger Ailes has moved her to an afternoon spot with lower ratings. Aisles continues to be upset with her performance there, and he eventually fires her. Carlson believes Ailes has fired her because she refused to have sexual relations with him, so she decides to personally sue him.

As Carlson’s suit gains steam, Megyn Kelly must decide whether to talk about Roger’s attempt in 2006 to have sexual relations with her. Kelly faces a dilemma here because, unlike Carlson’s experience, Ailes never made an attempt to stop her climb up the ladder.

Meanwhile, the movie focuses on the fictional story of a young woman named Kayla. Kayla gets sexually harassed by Ailes in return for letting her work on Bill O’Reilly’s popular program, which airs at the coveted 8 pm slot on the East Coast, just before Megyn Kelly’s 9 pm slot. Toward the end of the movie, Kayla admits she performed oral sex on Ailes for getting the O’Reilly job on THE FACTOR.

BOMBSHELL has some first-rate performances, especially by Charlize Theron as former Fox superstar Megyn Kelly. Theron gives a spot-on impersonation of the distinctive, talented news anchor. Her performance lends a lot of credibility to the movie’s presentation. Also notable is Margot Robbie’s performance as Kayla. However, the fact that the Kayla character is apparently a fictional “composite” figure of multiple women working at Fox actually dilutes the movie’s condemnation of sexual harassment in the workplace and at the Fox News Channel. The use of such a fictional character is extremely perplexing since a major witness to Ailes’ habit of sexual harassment was a long-time Fox employee named Laurie Luhn. Ironically, Luhn once tried to talk to President Obama’s Justice Department about Ailes, but Luhn says the two Justice officials she spoke with “were dismissive” regarding her complaint (Paul Bond, “Former Fox News Staffer Sues Showtime Over Her Portrayal in Roger Ailes Series,” The Hollywood Reporter, 01/09/19, https://www.hollywoodreporter.com/news/laura-luhn-sues-showtime-her-portrayal-roger-ailes-series-1174788). It does appear that Roger Ailes had a history of sexual harassment in the workplace. However, this movie has the danger of leading to a bunch of baseless accusations. Anyone can hire a lawyer these days to make a claim of sexual harassment against another person, but this doesn’t mean that the person is always guilty. In this light, it’s important to note that the movie fails to confirm any solid examples of sexual harassment by Bill O’Reilly, even though a statement at the end tries to give that impression. Thus, the implication against O’Reilly in the movie is just a case of Guilt by Accusation and Guilt by Association, which prove nothing.

BOMBSHELL’s perspective is also marred by a few political jabs at the conservative movement. For example, at one point in the movie, someone says that “the whole conservative establishment” was housed at the Fox News Channel’s headquarters in New York City. This statement is, of course, ridiculous. FNC is indeed a major source of conservative opinion in the United States, including current programs hosted by Sean Hannity, Laura Ingraham and Mark Levin. However, there are also some libertarian commentators at FNC, including Greg Gutfeld and Lisa “Kennedy” Montgomery. Furthermore, there are many conservative celebrities and organizations, such as Rush Limbaugh, Larry Elder, Dennis Prager, and Art Laffer, that don’t work at FNC, although they may appear sometimes in some segments.

In another scene, the movie mocks a minor character who believes in Jesus. In a second scene, a character claims she is in the “Jesus space” in her career, whatever that means.

Finally, BOMBSHELL’s condemnation of sexual harassment is marred by excessive, gratuitous, strong foul language and lewd content. To tell this story, you can’t avoid at least some lewd content showing how badly Roger Ailes behaved. However, all these “f” words and strong profanities abusing the name of God and Jesus are simply unnecessary. After all, if people are going to talk like a sailor, then it’s no wonder that, at some point, someone somewhere is going to act inappropriately in a sexual manner!