GOD’S NOT DEAD: A LIGHT IN DARKNESS

"All the Time, God is Good" 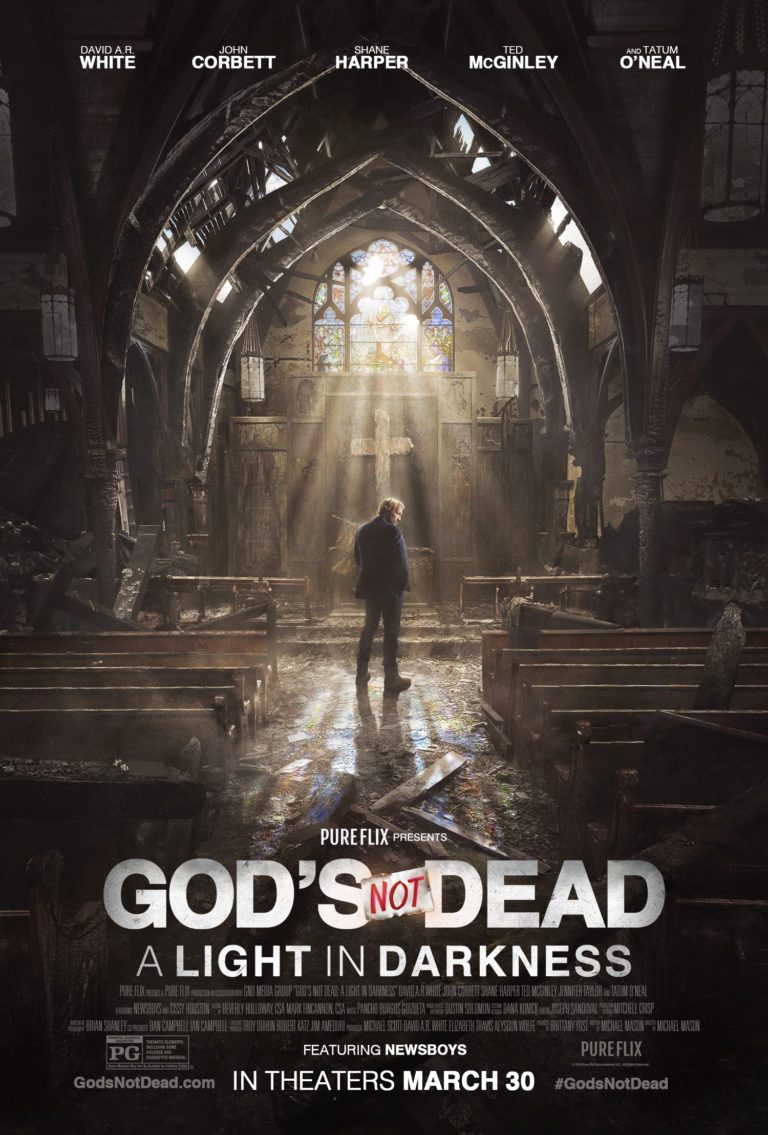 In GOD’S NOT DEAD: A LIGHT IN DARKNESS, Pastor Dave finds him and his church at the center of more controversy. When an explosion at his church results in the death of his co-pastor, the leaders of the school surrounding the church property decide to forcibly buy the church from Dave because it’s bringing too much controversy. Dave convinces his estranged atheist brother to fight the school in a legal battle. A media war ensues, but gets very messy and starts hurting people’s lives. Will Pastor Dave lose himself in his fight to save the church building?

GOD’S NOT DEAD: A LIGHT IN DARKNESS is the best made, most entertaining GOD’S NOT DEAD movie yet. The acting from David A.R. White and John Corbett, who plays Pastor Dave’s brother, is fantastic. They have a chemistry as brothers that captures the viewer’s attention. Light caution is advised for younger children for brief thematic material. Otherwise, GOD’S NOT DEAD: A LIGHT IN DARKNESS has an inspiring message extolling responding to hate with Christ’s love, and not letting cultural and worldview divisions stir anger and hate.

(CCC, BBB, PC, V, A, M):
Dominant Worldview and Other Worldview Content/Elements:
Very strong Christian, biblical worldview of responding to hate with the love of Jesus, plus strong themes of family reconciliation, forgiveness, and grace and many Christian elements like prayer, quotes from Scripture being quotes, Christian church services, and a light politically correct statement is made about Jesus being the ultimate social justice warrior;
Foul Language:
No foul language;
Violence:
An explosion at the church knocks a man over and he dies from the impact, some punching and wrestling between adult men, adult man attacks a teenage boy, bricks are thrown through windows;
Sex:
No sex, but two teenagers do kiss;
Nudity:
No nudity;
Alcohol Use:
Adults drink beers and implied drinking from teenagers at a party where the teenagers are drinking from red plastic cups, but no alcohol explicitly shown;
Smoking and/or Drug Use and Abuse:
No smoking or drug references; and,
Miscellaneous Immorality:
Christian characters make some hypocritical and sinful decisions but repent and some vandalism occurs, but the main vandal also repents.

GOD’S NOT DEAD: A LIGHT IN DARKNESS is the third movie in the GOD’S NOT DEAD movie series and sets itself apart as the most tonally different and perhaps best movie Pure Flix Entertainment has released.

In the story, Pastor Dave is released from prison after the court found him not guilty for refusing to turn over his sermons to the city government. His church St. James is now embroiled in a city debate surrounding the controversy. To many believers, Pastor Dave is a hero for standing up for the faith. Others are angry that the controversial St. James Church is still a part of a university that receives government funding.

[SOME SPOILERS BELOW] Dave appoints his good friend Jude as a co-pastor at St. James, which excites the congregation. One night, a protestor throws a brick through the church’s window. Jude runs inside to turn off the alarm, but doesn’t know that the brick has broken a gas pipe. When Jude turns on the light, a spark causes an explosion. Dave is able to pull Jude’s body out of the burning building, but in the explosion Jude hit his head and shortly after passes away.

Dave is devastated and angry by Jude’s death. To make matters worse, the school informs him that, by way of eminent domain, they are forcibly buying the church from Dave and tearing it down. This makes Dave even more angry. So, he enlists his estranged atheist brother, Pearce (John Corbett), a talented lawyer, to help him fight for the church, which was their father’s church. A budding romance also begins between Dave and Meg, a local woman who serves at the homeless shelter.

Meanwhile, Keaton, a teenage student at the school, is struggling with whether she believes in God anymore, and she’s helped by the local student leader Josh Wheaton.

As Dave and Pearce battle the school, including Dave’s old friend Thomas Ellsworth who’s on the board of the school, things get brutal. Pearce encourages Dave to wage a media war against Thomas and the school. This results in an angry, divided community that results in more violence.

Has everyone forgot what the church is even about? How will God shine through the divided community? [END OF SPOILERS]

GOD’S NOT DEAD: A LIGHT IN DARKNESS is the best made, most entertaining GOD’S NOT DEAD movie yet. The acting from David A.R. White and John Corbett is fantastic, and they have a chemistry as brothers that captures the viewer’s attention. The writing has good jeopardy and tension, but there’s too much exposition in several shots of news anchors updating the viewer on what’s happening in the community. The sequences are quite unrealistic. There’s also a scene or two with poorly recorded ADR. Otherwise, the movie is beautifully shot and scored.

This third installment of the GOD’S NOT DEAD series skillfully captures how a lack of love and grace is dividing America today, sometimes even within the Body of Christ, the Church. As we’ve seen in our own culture, and as shown by the movie, a media and PR war between opposing worldviews leaves no room for mercy or justice. In A LIGHT IN DARKNESS, Pastor Dave struggles with his own pride and anger, and forgets that the church isn’t simply a building, it’s a body of believers. The other message that shines through is that God isn’t afraid of questions or doubts from people struggling with their faith. One character tells Pastor Dave the church is known for what’s it against, but it’s harder to see what it’s for. Though it’s a characterization of the church that could be taken too far by those who are against God’s moral teachings, it’s always important for Christians to remember Jesus’s words in John 13:35, “By this everyone will know that you are my disciples, if you love one another.”

There are some negatives in A LIGHT IN DARKNESS too. At one point, Josh Wheaton argues that Jesus was the ultimate “social justice warrior” in that he fed the orphan and widow, and fought for the downtrodden. This line is either politically correct, or uninformed, because most modern, self-proclaimed “social justice warriors” are proponents of identity politics and even abortion, which are antithetical to the teachings of Jesus Christ.

Ultimately, GOD’S NOT DEAD: A LIGHT IN DARKNESS is an entertaining, inspiring movie that proclaims that Jesus is the Truth and the Light, and that the followers of Christ, are called to be lights in the darkness and we’re to respond to hate with love. Themes of family reconciliation, forgiveness and grace also shine through the heart of this movie and will encourage everyone who watches. A light caution for younger children is advised for a building explosion that results in a death, and some other thematic material.

Rent or Buy GOD’S NOT DEAD: A LIGHT IN DARKNESS: