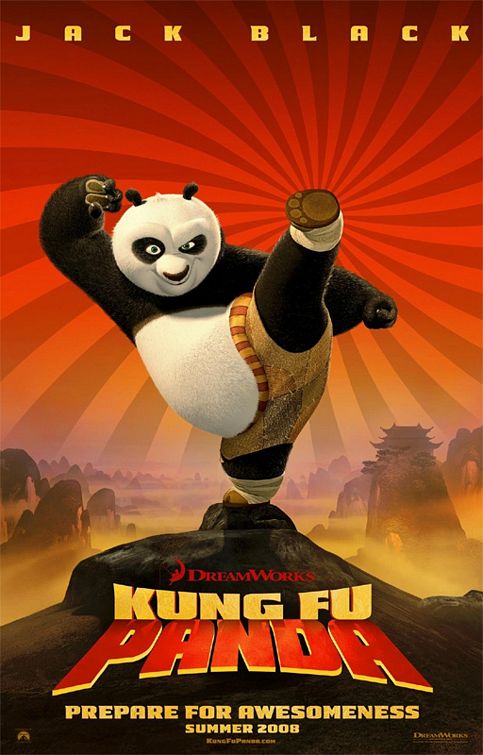 KUNG FU PANDA is very funny, very exciting and very clean. A quirk of destiny makes Po, a chubby, clumsy Panda, the new dragon warrior chosen to protect his village from the evil, treacherous snow leopard, Tai Lung. Shifu is visibly upset because he has personally trained the Furious Five martial arts masters. He’s determined to show that this fat panda is a failure. When Shifu has to take over the martial arts academy, however, he begins to understand that there are no accidents and that it may have been his own pride that helped turn Tai Lung into a monster. Then, Tai Lung escapes from prison. The Furious Five cannot stop him. All that stands between Tai Lung and a scroll giving anyone unlimited powers is the silly, disheveled, warm-hearted, roly-poly Po.

KUNG FU PANDA is the best-written, best-executed, best-produced, best-animated movie so far of 2008. There’s no sex, no profanity. Most of the characters are cute and adorable. And, the movie extols personal themes and character traits espousing virtue, honor, loyalty, and sacrifice. There is, however, some non-specific Eastern mysticism and violence, so it requires caution for younger children.

(PaPa, BB, CC, Ro, Cap, VV, M) Non-specific Eastern, nominalistic, slightly mixed pagan worldview that tends to indicate it doesn’t matter if there’s good or evil and that people just pass on into the ether somehow which, although done tongue-in-cheek and humorously, could be problematic for younger children, but beyond the worldview there are strong moral and redemptive themes and character traits with Christian, biblical values such as extolling overcoming one’s limitations, sacrificing oneself for others, doing the right thing, being kind to others, and being humble, but mitigated by the central premise that, if you only believe, you can do anything, mixed with some Romantic themes of following your heart and pursuing your dreams, but with a light capitalist context of finding one’s vocation or one’s calling; no foul language whatsoever; lots and lots of cartoon slapstick violence, including some of the most exciting cartoon kung fu sequences ever, but the violence includes shooting bows and arrows, throwing spears and ninja devices, beatings, kickings, and a host of other martial arts activities that will be problematic for younger children; no apparent nudity; no sex; no alcohol; no smoking; and, ridicule and mocking of slovenly fat kid.

The good news is that KUNG FU PANDA is very funny, very exciting and very clean. DreamWorks once indicated it didn’t want to do cute animal characters, but some of these characters are very cute and adorable.

Po, a panda, is fighting the forces of evil with the legendary Furious Five, Tigress, Crane, Mantis, Viper, and Monkey, when he wakes up in his father’s noodle shop. His father, by the way, is a goose, which makes one wonder, and becomes a tremendous joke in the middle of the movie.

When it’s announced that today is the day that the king fu master will pick the legendary dragon warrior from among the inhabitants of Po’s village, all the villagers head up the mountain to the kung fu temple and academy. The dragon warrior, by the way, will be chosen to protect the village from the vengeful, treacherous snow leopard, Tai Lung.

Po’s father wants him to haul the noodle cart up to the top of the mountain. Po, an overweight and slothful panda, can barely get the cart up a few steps. Eventually, he climbs up the steps to find out the gates are closed. After some vain attempts to get into the kung fu academy, he launches himself with some Chinese fireworks and falls directly in front of the kung fu master’s finger. Thus, he is appointed the dragon warrior!

Shifu, voiced by Dustin Hoffman, is visibly upset because he has personally trained the Furious Five. He determines that he’s going to show that this fat panda is a failure, but when Shifu has to take over the academy because the master is born into the next world by the peach blossoms, he begins to understand that there are no accidents and that it may have been his pride when he trained Tai Lung that helped turn Tai Lung into a monster.

Then, Tai Lung escapes from prison. The Furious Five cannot stop him. All that stands between him and the dragon warrior scroll giving anyone unlimited powers is the silly, disheveled, warm-hearted, roly-poly Po.

KUNG FU PANDA is the best-written, best-executed, best-produced, best-animated movie so far of 2008. If a movie succeeded merely on quality, then it will be a tremendous success. There’s also no sex, no profanity. Most of the characters are cute and adorable. And, the movie extols personal themes and character traits espousing virtue, honor, loyalty, and sacrifice.

Set in China, the movie contains many jokes and wordplays using Confucian and Taoist type aphorisms. It often seems like the filmmakers do not take these constant nods to Chinese mysticism seriously, but the worldview is clearly mystical. For example, the kung fu master is carried into the netherworld by peach blossoms, and the central plot point stated overtly is that there is no secret to success – all you have to do is believe. If you believe, you can fly, ascend mountains, climb rock walls, and do anything. Christians realize that we can’t just name it and claim it. Our belief must be based in the reality of the death and resurrection of Jesus Christ. Furthermore, while God answers prayer, we do not have the magical power to become gods or super kung fu fighters merely because we believe.

In a Los Angeles Times article on THE SECRET, a reporter said that one of her friends said he was going to get a six-pack of abs not by exercising but by believing. The reporter ridicules this notion. Po becomes a superhero because he believes in himself. He is one of the moist delightful superheroes, but children need to be cautioned that we live in a real world with real problems requiring a real savior, not just delusional thinking.

This caution aside, KUNG FU PANDA is a delightful movie and MOVIEGUIDE® is very enthusiastic about it. It doesn’t have a lot of the sarcasm and the double-entendre of previous DreamWorks movies.