"Racing for Family Harmony and Success" 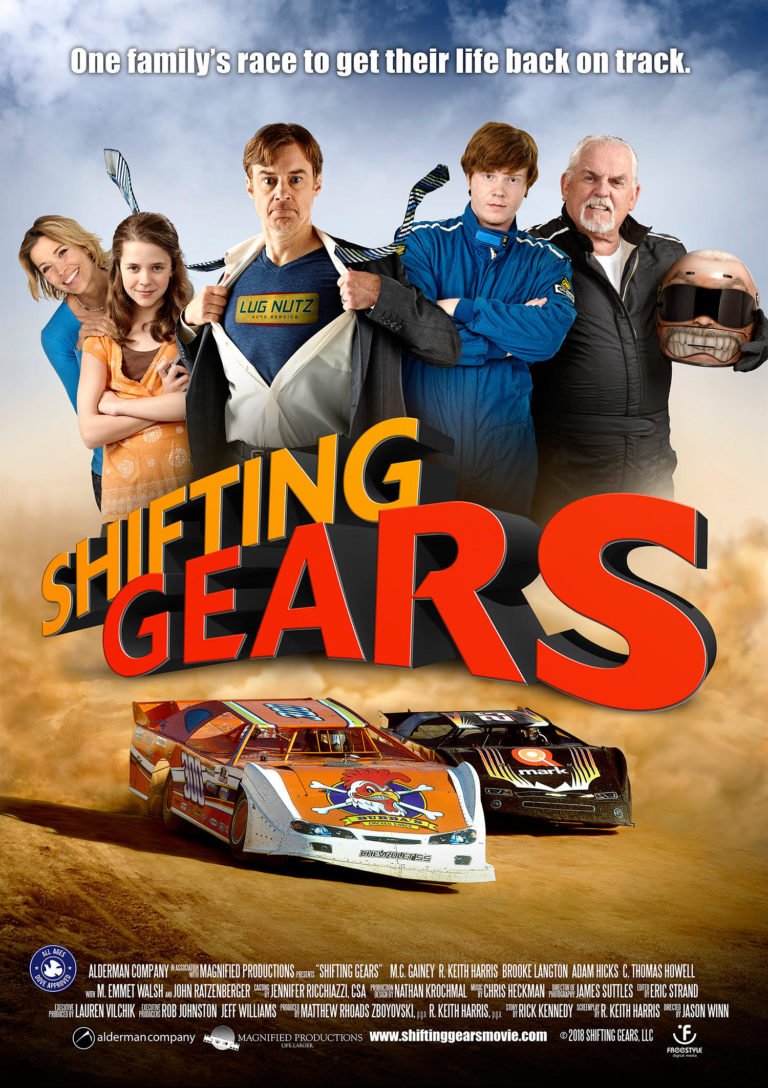 SHIFTING GEARS tells the story of Tom Williamson, his lovely wife Carol, their son Jeremy, and their young daughter Stephy. When Tom’s estranged father dies and leaves his gas station to Tom, Tom decides to quit his restrictive job and become his own boss. Carol hopes this will be an opportunity for the family to reconnect. Jeremy, a wannabe mechanic and race car driver, hopes this will be an opportunity to do what he loves while spending some time with his father. Trouble strikes, however, and everyone must pull together to save the family and the gas station, with help from some new friends.

Despite some cheesy, confusing moments, SHIFTING GEARS has an engaging storyline with good acting, interesting characters and fairly good production values. There are some moments of bitterness, anger and dishonesty that are rebuked, as well as some light foul language and disrespect for elders. These elements warrant caution for younger children. However, SHIFTING GEARS is a heartwarming, entertaining movie promoting family, hard work, honor, faith, and forgiveness. So, media-wise families probably will want to check out SHIFTING GEARS.

(BB, CC, CapCap, Acap, L, V, N, A, M):
Dominant Worldview and Other Worldview Content/Elements:
Strong moral, redemptive worldview extolling hard work, not giving up, the importance of family, forgiveness, and humility, faith is mentioned but not expounded upon, with strong entrepreneurial pro-capitalist message but brief anti-big business elements;
Foul Language:
Several light obscenities and no profanities;
Violence:
Light violence but nothing graphic such as car gets flipped with man in it, nothing graphic is shown, boy gets stuck under a bouncing car hood (humorous, but not violent);
Sex:
No sex, but husband and wife lie in bed together with some light physical contact;
Nudity:
Shirtless man is shown, girls in short shorts, woman wears low cut tops with cleavage, girl shows a little bit of belly;
Alcohol Use:
Beer is mentioned, but not drunk;
Smoking and/or Drug Use and Abuse:
No smoking or drugs; and,
Miscellaneous Immorality:
Man steals and commits sabotage, couple fights, younger people are occasionally disrespectful to elders, man displays anger issues and bitterness.

SHIFTING GEARS tells the story of Tom Williamson, his lovely wife Carol, his son Jeremy, and his daughter Stephy.

Tom is having trouble with his job because he doesn’t have a four-year degree. He’s determined that his son will do better than him, but Jeremy just wants to go to community college and take the mechanics course. When Tom’s estranged father, Clem, dies and leaves him his gas station and house, Tom decides to quit his job and become his own boss. Carol hopes this will be an opportunity for the family to reconnect. Jeremy hopes he’ll finally be able to do the work he loves while spending some much-needed time with his father. The family sells their house, get settled into Clem’s house, and set up their business, complete with their new employees, a big man named Derwyn and a young, beautiful woman named “Charlie.”

The drama starts immediately, with the wealthy Conrad Baines trying to buy the station from the Williamsons. They refuse, and all seems well, until a lawyer shows up telling them there’s a lien on the station. If they don’t want it going to auction, they’re going to have to pay more than $100,000. Even if Jeremy gives up his college fund, they’re still about $50,000 short.

It’s then that Jeremy announces his solution: let him race in the upcoming dirt track race with a grand prize of $50,000. Tom is willing to try the race out, but only if he’s the driver, like his father before him. Their new hired hands get to work on the car, and Tom gets to work practicing. Several arguments later, along with a car flip, and a change of heart, Jeremy is the new driver and is on his way to becoming a bona fide racecar driver, with his father’s blessing.

Jeremy’s third in a line of racers, and a good one at that, so he has a chance to win the race. However, when you’ve got an enemy or two on the track, things can still get sticky. Ultimately, family, hard work and honor, must overcome greed, pettiness and anger.

SHIFTING GEARS can sometimes be rather cheesy and confusing, but generally has an engaging storyline with good acting, interesting characters, and fairly good production values. Strangely enough, it has both a strong entrepreneurial message as well as being anti-big business. Faith is mentioned, but not examined. One man has anger issues and bitterness toward his father, and another man steals and commits sabotage, but these are portrayed as bad. Also, people occasionally show disrespect to their elders, which media-wise parents may not want their children to copy.

That said, SHIFTING GEARS does a good job showing the importance of family, not giving up, repentance, forgiveness, and showing humility to your children. Because of the family squabbles, some miscellaneous bad behavior and some light foul language, caution is advised for younger children. The violence in SHIFTING GEARS is minimal, however.