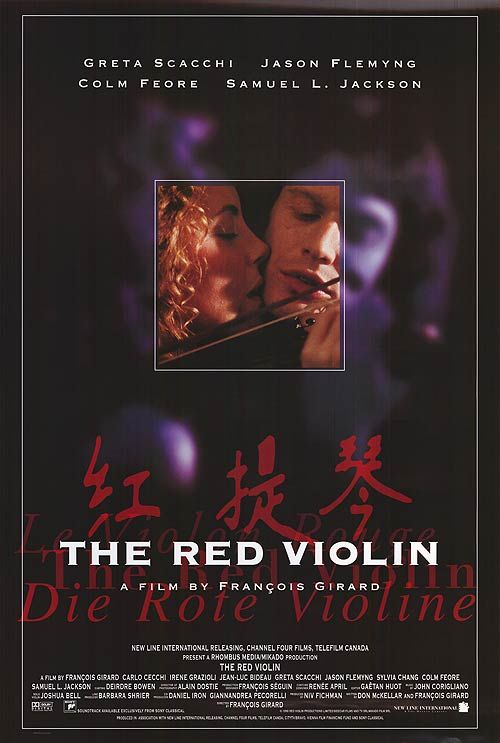 Strange, detailed, visually spectacular, epic, poignant, and beautiful only begins to describe a fascinating art house movie called THE RED VIOLIN. This movie about the creator, owners and users of a strange red violin uses 7 languages and covers a period over 300 years. Moral trouble spots include a Tarot card reading, some brief but graphic sexual scenes and the idolization of a man-made object, the violin.

Strange, detailed, visually spectacular, epic, poignant, beautiful, and sometimes repugnant only begins to describe a fascinating art house movie called THE RED VIOLIN. Directed by Canadian filmmaker Francois Girard, who also made 32 SHORT FILMS ABOUT GLEN GOULD, this movie about the creator, owners and users of a strange red violin uses 7 languages and covers a period over 300 years.

The movie begins in present-day Montreal with Samuel L. Jackson playing a violin restorer going to an auction. At this auction, various other antique instruments are going for millions of dollars. The auctioneer (Colm Feore) finally mentions the last item up for sale, the so called “Red Violin.” (Throughout the movie, the auctioning off of this particular piece is revisited, each time with greater detail, in order to understand the lives and significance of those bidding on the instrument.)

At this point, the story goes back in time to 1681 in Italy, where master violinmaker Nicolo Bussoti (Carlo Cecchi) forms his greatest achievement. Bussotti tells his pregnant wife that he will give his best violin to their newborn son. Anna (Irene Grazioli) is joyous, but worries that she may be too old to bear a child in safety, due at the next full moon. Anna visits a fortuneteller using Tarot cards and inquires about her future, which, unbeknownst to Anna, will be tragic – both she and her son will die during labor.

Throughout the movie, Anna’s card reading is re-visited, as a way to link the different time periods and different users of the violin. The audience begins to understand that the fortune isn’t so much about Anna; it is about the violin.

After Anna’s death, the violin travels to Vienna where generations of orphans play it at a monastery. Eventually, in 1792, it comes into the hands of 6-year-old child prodigy Kaspar Weiss (Christoph Koncz). The monks call in a French music master to launch Kaspar’s career, but when Kaspar becomes emotionally dependant on the violin, he becomes physically ill at the very moment of his royal audition and dies.

The Red Violin is buried with Kaspar, but grave-robbers steal it, and it ends up in the hands of nomadic gypsies. In England in 1893, the Red Violin captures the attention of Frederick Pope (Jason Flemyng), a Byronic violinist who enthralls audiences with his flamboyant musical style. Pope even plays the violin during his sexual romps with novelist Victoria Byrd (Greta Scacchi). When Victoria tries to destroy the violin in a fit of jealousy, Pope’s Chinese servant rescues it and transports it to his native Shanghai. For decades it sits in a Chinese pawnshop, until a mother buys it for her young daughter Xiang Pei (Sylvia Chang). Several years later in 1965, Xian Pei finds herself involved in the Chinese Cultural Revolution. She treasures the violin, but cannot keep it and so implores a local music teacher to take it into his hiding.

Finally, the Red Violin remains hidden until the present. It is rediscovered and sent to an auction house in Montreal. There, it waits for auction, ready to be purchased by a descendant or associate of previous owners, but a secret admirer has other plans for it, wishing to finally make it what it was meant to be – a gift from a father to a son.

Figuratively and cinematically, this movie is all over the map. It is an opulent costume drama, a political thriller and a sleek, modern mystery. Though the individual stories proceed chronologically, two separate framing devices, the Tarot readings and the ever-unfolding auction, connect them. The violin passes from a pregnant woman, to a young child, to a grown man, and to a mother. Furthermore, it begins with one master and ends with another, its savior. Emotionally, the violin represents different things to its different owners. Bussotti loses a child, so the violin becomes his progeny. Later, it becomes the mother Kaspar Weiss never had, Pope’s mistress, and an enemy of the people in China.

Like SHINE and AMADEUS, THE RED VIOLIN is filled with music. Joshua Bell, one of America’s most celebrated violinists, offers the entire violin solos throughout the ages. Always beautiful and frequently haunting, the music is passionate and likewise provides a thread for the whole story.

Morally, this movie is about obsession and acting on one’s obsessions. The violin’s creator is a driven, obstinate man who loves his wife and unborn child, but seems to love violins more. Kaspar’s music teacher desires fame and fortune. Frederick Pope desires sensual satisfaction (therefore, the audience sees him fornicating several times, providing the movie’s primary visual objectionable material). Only Xiang Pei practices courage to save the violin and doesn’t use it as a tool to practice selfishness. Finally, in the end, one man’s passion turns him to crime.

The meaning and theme of the movie remains somewhat aloof, but Girard says, “If you ask me what this film is really about, I would say it’s actually about love and mortality. It’s about surviving mortality through art, beauty and craft. I think that’s what all artists try to do. That is the afterlife that art can give us.”

Two comments of the movie’s morality must be made. First, the movie gives credence and recognition to the power of Tarot cards. Used throughout the movie, this unfortunate practice mildly suggests that the violin has a mystical, magical power over its owners. This is an unnecessary plot device. Secondly, while the violin may have survived over hundreds of years, it is important for the viewer to know that “this too shall pass away.” Beauty is forever, because God is forever. Ancient objects can remind us of the eternal beauty of Christ, but can never replace Him. Hence, the violin becomes a sort of idol to its users and ultimately to the bidders.

If this movie was made by an American production company, with the auction held in New York or LA instead of Canada, it would probably get more recognition and box office than what it will receive in America. That is unfortunate. So few movies truly provide art. THE RED VIOLIN does. Despite its morally troubling spots, it presents an epic viewing experience, showing a wide range of characters, time periods, locations, and more in celebration of one of the most beautiful instruments ever created.