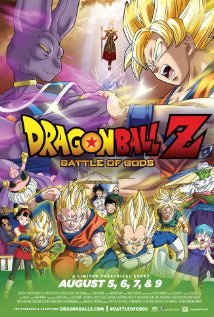 DRAGON BALL Z: BATTLE OF GODS is a feature-length animated movie from Japan dubbed into English. Based on a long-running TV program and comic book series, its story focuses on Goku, an alien who has gained supernatural powers through special training and many adventures. Beerus, a petulant god of destruction, wakes up and remembers a prophecy about another god who can challenge his own powers. He believes Goku or one of his alien friends may be that god. Beerus travels to Earth to attend the birthday party of one of the aliens’ human wife, where he eventually challenges Goku and his friends to a fight.

BATTLE OF GODS has a lot of goofy humor that appeals to children. The almost constant humor is pretty funny throughout the story. The fight scenes are more typical of the average animated Japanese movie, however. Though loosely based on Buddhist legends and folktales about a “Monkey King” god, the movie has few familiar Buddhist aphorisms. Instead, it has a polytheistic pagan worldview about getting supernatural powers, mostly through one’s own strength. BATTLE OF GODS also has some brief foul language.

(PaPaPa, FRFRFR, B, M) Very strong, polytheistic pagan worldview loosely based on Buddhist folktales and legends, with a science fiction twist of superhuman alien beings, plus some moral elements includes extolling purity of heart and speaking against pride; eight obscenities and comical villain vengefully writes “poopy” on a gift planned to be a game prize; lots of fantasy action violence includes alien hero and the “God of destruction” fight with supernatural strength and supernatural energy, god shoots energy beams at his attackers, other alien and half-human characters with supernatural powers also fight the god, some comical pratfalls and disagreements, comical slapping, woman who before the movie’s story was turned back into a child when a wish dragon granted characters a wish to be “young” again holds gun at boy’s head and demands money but none of the other adults believe she is serious or that the gun is real, female adult character hit in leg from the gun’s bullet and the God of Destruction is also hit in the forehead with a bullet from the gun but the bullet has no affect on his body; no sex scenes but there’s a joke where one elderly character hopes to get some “dirty movies”; partial brief upper male nudity; alcohol use; no smoking or drugs; and, pride but partially rebuked, comical minor villains vandalize gifts and steal part of another gift but the theft is discovered, comical minor villains are greedy for money, and a magical dragon can grant characters one wish.

DRAGON BALL Z: BATTLE OF GODS is a feature-length animated movie (one of 18 or more) based on a popular Japanese TV series (1989 to 1996). The TV series is itself loosely based on the last 315 chapters of a 519-chapter comic book that itself was based on the classical Chinese novel JOURNEY TO THE WEST (circa 17th Century) describing the adventures of a Buddhist monk who travels to India in search of special Buddhist scrolls and has many fantastic adventures with many fantastical beings. The TV series focuses on one of the characters who helps the monk along his journey, a monkey-tailed boy with a monkey tail named Goku who has become an adult by the time of the DRAGON BALL Z series (an earlier TV series called DRAGON BALL [1986 to 1989] focused on the boy and his adventures while growing up to be a man). Goku is loosely based on the character Sun Wukong in JOURNEY TO THE WEST, a “monkey king” god born from a stone who achieves supernatural powers through spiritual, moral and physical practices associated with Buddhism and Taoism and who accompanies the monk on his adventures. At the start of the DRAGON BALL Z series, however, it’s revealed that Goku is actually an alien, a member of “a nearly extinct extraterrestrial race called the Saiyans, who sent Goku to conquer Earth for them, until he suffered a severe head injury and lost all memory of his mission” (http://en.wikipedia.org/wiki/Dragon_Ball).

In BATTLE OF GODS, one of 14 DRAGON BALL Z movies, the God of Destruction, Beerus (who looks a bit like a cross between Anubis the Egyptian jackal god, a cat and a kangaroo), learns that Goku has defeated Frieza (Freeza in the original Japanese version), a galactic overlord who tried to conquer Earth. By this time, Goku has become a “Super Saiyan,” and Beerus believes Goku is a “Super Saiyan God” who’s nearly equivalent to him. Beerus learns that Goku and four other Super Saiyans are living on Earth, but Goku is currently on another, tiny planet ruled by a friendly “upper level god” named King Kai. Beerus easily defeats Goku when Goku uses Level 3, the maximum level of his Super Saiyan powers. So, Beerus decides to travel to Earth to challenge the other four Super Saiyans.

King Kai alerts Prince Vegeta (“Vageeta”), the leading Super Saiyan in Goku’s absence, not to offend or challenge Beerus when he arrives on Earth at the birthday party for Vegeta’s wife, a human female named Bulma. Can Vegeta keep the partygoers from insulting or challenging the strange partycrasher and his assistant, Whis (“Wees”)? Can Goku recover from his injuries and gain enough strength or new powers to truly challenge Beerus?

DRAGON BALL Z: BATTLE OF GODS is mostly a fantasy film, but it also has a few elements of science fiction since it partly deals with alien beings. It also has mythological elements because part of the story is about a deity called the “God of Destruction.”

Like the best Japanese anime movies and TV programs, BATTLE OF GODS has a lot of goofy humor that appeals to children. The almost constant humor is pretty funny throughout the story. The fight scenes are more typical of the average anime movie, however.

Though loosely based on Buddhist legends and folktales about “the Monkey King,” a popular god from Hindu and Buddhist writings and folktails, the dubbed version of BATTLE OF GODS downplays the Hindu and Buddhist theology of those stories and their background to create a new fantasy with science fiction overtones. However, the movie still has references to gods, so it’s set in a polytheistic world. Also, as Buddhism teaches, the movie shows that Goku gets new powers mostly through his own strength, but with some help from others. In Buddhism, there are apparently two types of disciples, a disciple who attains spiritual enlightenment (including nirvana) by himself, and a disciple who attains enlightenment with the help of a teacher or teachers. Also in Buddhism, spiritual enlightenment doesn’t depend on one’s personal relationship with a god or group of gods, as in Biblical Christianity, not even the first god in Chinese mythology, who is said to be without beginning, eternal, limitless, and without form, the divine creator of Heaven and Earth. BATTLE OF GODS doesn’t mention this ultimate god but identifies King Kai as a minor god who looks after a particular part of the galaxy, including the human and alien beings living there.

Thus, BATTLE OF GODS has a very strong polytheistic pagan worldview, influenced by Hindu, Buddhist and martial arts culture in Asia, and the rise of science fiction concepts in comic books and other similar cultural artifacts in the last 60 to 100 years. As such, it teaches a form of works righteousness and even seems similar to false Mormon doctrines about multiple gods and personal salvation through works instead of through faith, as taught by Ephesians 2:8-10 in the Bible. The movie also teaches the attainment of supernatural, god-like powers through self-effort. BATTLE OF GODS also contains some foul language and a couple light lewd references used for comical effect. There’s also lots of fantasy action violence where aliens and humans with supernatural powers fight a petulant god with tremendous supernatural powers who’s bent on destruction if you irritate or anger him. At one point near the end, Lord Beerus notes that there are 12 other universes besides ours, with gods or god-like beings even more powerful than he is.

Ultimately, the fantasy pagan theology in BATTLE OF GODS is unacceptable and abhorrent. The movie’s entertaining on a certain level, but media-wise viewers should stay away.