GIRLS OF THE SUN 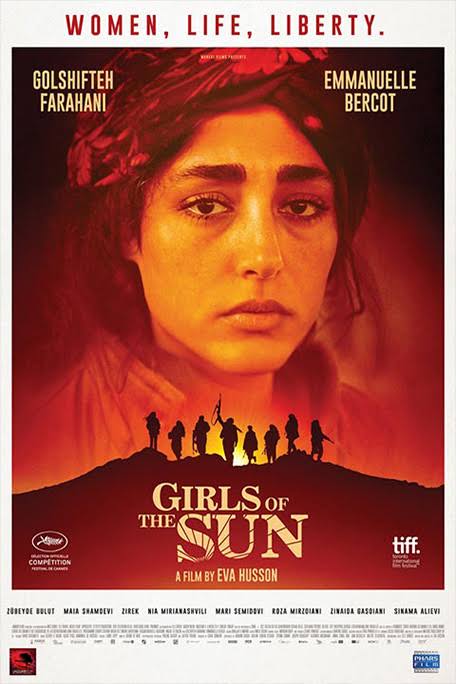 GIRLS OF THE SUN is a fact-based fictional story about an all-female Kurdish troop of women fight against ISIS Muslim fanatics in Syria in 2015. Bahar, a former lawyer, leads the women soldiers in hopes of finding her kidnapped son among a group of other kidnapped boys being trained to fight. Mathilde, a French journalist, bravely joins the group of extraordinary women to witness and document their story. Some flashbacks show how Bahar’s son was taken away and how she was sold into sex slavery but escaped. The recurring battle cry the women soldiers chant is “Women, Life, Liberty!”

GIRLS OF THE SUN is emotionally captivating and suspenseful. The production values are top notch. The lead actresses do a superb job, but some characters are one-dimensional. Also, the flashbacks of how Bahar was sold into sex slavery and escaped sometimes get in the way of the narrative flow. GIRLS OF THE SUN has some strong moral, pro-family elements. However, extreme caution is advised for some humanist content, intense war violence, references to rape and sex slavery, brief graphic violence, and three obscenities.

(H, BB, Co, FR, L, VVV, S, MM):
Dominant Worldview and Other Worldview Content/Elements:
Light humanist worldview with strong moral, pro-family elements about female soldiers fighting ISIS Islamofascist fanatics in Syria and Iraq (the female soldiers seem to be part of a Marxist Kurdish force [the women call each other comrade, and they repeat the slogan “Women, Life, Liberty” during the movie, but one woman is heard telling a captured ISIS fighter that she’s a Muslim too like him, and no other Marxist ideology is heard], the woman journalist following the female soldiers has a pro-family attitude, but she also seems a bit humanist, movie extols family, truth, love, a minor female character on a TV says “God bless you” to women who have been kidnapped and sold into sex slavery by ISIS, and some references to Islam but movie opposes ISIS
Foul Language:
One “f” word, one “s” word, one “b” word, a handful of the hiding locations are grim and unsanitary, woman goes to use the bathroom in a dirty and dark room with no working toilet, women hide out in dirty buildings and sleep on cold floors with dirt, grim and dried blood
Violence:
Graphic shot of woman near a pool of blood after being raped, and it’s implied she committed suicide, dead boy has a blood stained sweater and a pool of blood beside him, several gun battles with several soldiers shot, two explosions where two women die, and others are slightly wounded, woman gives birth in one scene, Islamofascist soldiers drag innocent women by the arms and hair to rape them, men shower women prisoners by violently pushing them around in the shower and holding their heads back aggressively, men lined up and executed off screen, ISIS sniper shot from afar, soldiers clear rooms and houses, kidnappers threaten women with death
Sex:
It’s implied in one scene that woman and her younger sister are raped after being kidnapped by Muslim terrorist army, and women are sold into sex slavery, but a few escape together later
Nudity:
No nudity
Alcohol Use:
No alcohol
Smoking and/or Drug Use and Abuse:
No smoking or drugs; and,
Miscellaneous Immorality:
Strong miscellaneous immortality includes kidnapping, sex slavery, brainwashing, lying, abuse, and the Arabic words “Allah is the greatest” are falsely translated as “God is great.”

GIRLS OF THE SUN is a fact-based war movie from France and Belgium, based on the story of an all-female, left-wing Kurdish combat unit who fight against the murderous Islamofascist fanatics of ISIS in Syria and Iraq in 2015.

Bahar, the feisty leader of an all-female Kurdish combat unit, has committed to stand up against ISIS soldiers who raped, tore apart and killed most of the women’s families. Meanwhile, Mathilde, a French journalist who wears an eye patch after a piece of bomb shrapnel flew into her eye, is introduced to Bahar while she’s in the middle of a heated argument with her male commander. Her male commander wants to stay back and wait till an American airstrike is carried out. Bahar informs him that the threat of an airstrike has made ISIS unsettled, and this is the only opportunity they have to attempt to rescue civilian captives held by ISIS.

Mathilde sees this interaction and joins Bahar and her unit to witness and document the powerful story unfolding in front of her. As the story progresses, through flashbacks, the audience learns this gritty war leader, Bahar, was a successful lawyer in Iraq. She had a sweet husband and a young son, but when ISIS raided her home, her life was turned upside down. ISIS warriors killed her husband and father, kidnapped her son to train him to be a warrior, and sold Bahar into sex slavery. The movie intersperses scenes from Bahar’s captivity and eventual escape with scenes of the French reporter following the women soldiers into battle.

Bahar believes her young son could be at the nearby school where innocent children are being held captive and is determined to get to him before it’s too late. The commander eventually agrees to let Bahar and her unit attack the ISIS headquarters near the school and try to rescue the captives, but he remains behind. During a skirmish, Bahar’s unit captured an ISIS fighter who can lead them through some tunnels to the enemy’s headquarters.

The journey to get to the ISIS headquarters and the school isn’t easy. And, there’s no guarantee that Bahar’s son will be there alive.

GIRLS OF THE SUN is an engaging, dramatic war movie. The production values are extremely advanced with detailed shots of war violence and epic shots of the landscape in the Middle East. The lead actresses do a superb job, but some of the characters are a bit one-dimensional. The movie is emotionally captivating, but, except for Bahar, the characters don’t stick with viewers like they do in other recent war movies like PEARL HARBOR, SAVING PRIVATE RYAN or HACKSAW RIDGE. Considering the high production values, it would have been nice to see more developed characters. Also, the flashbacks sometimes slow down the narrative.

GIRLS OF THE SUN is still pretty effective, however. Extreme caution is advised for intense war violence, references to rape and sex slavery, brief graphic violence, and three obscenities.

Watch GIRLS OF THE SUN: