BOMBSHELL Fizzles with Only Part of the Story 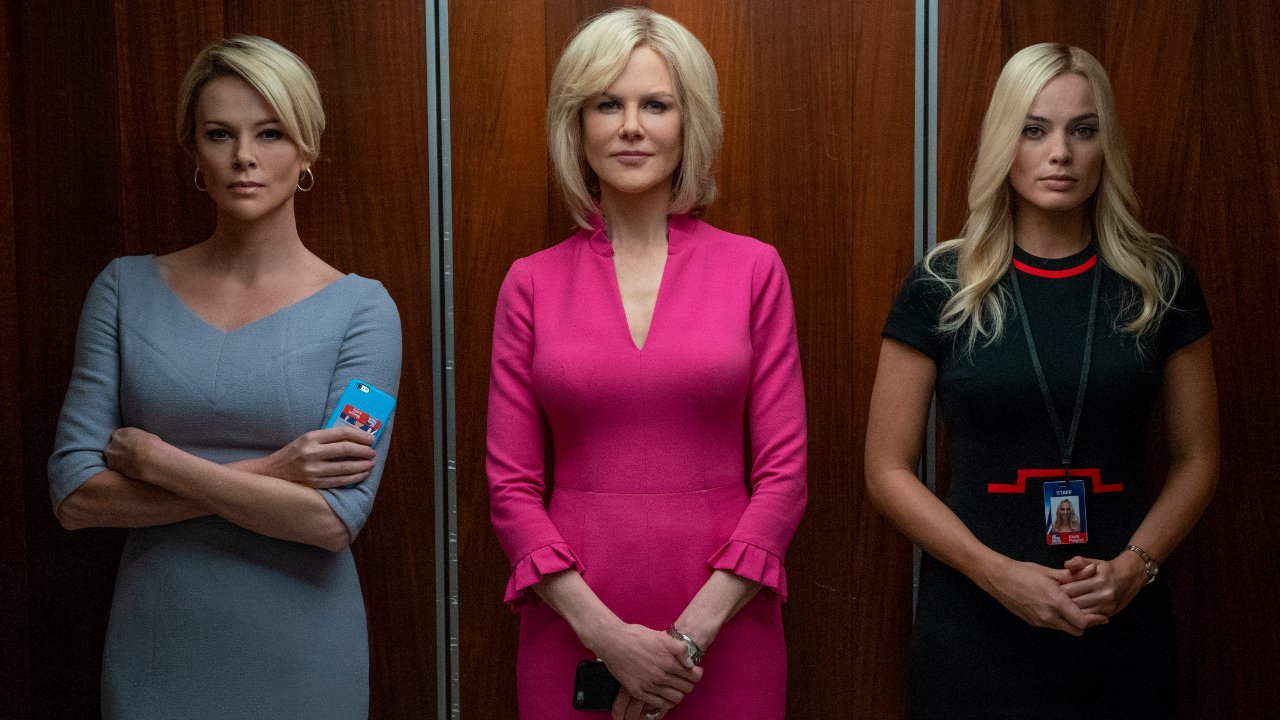 BOMBSHELL Fizzles with Only Part of the Story

BOMBSHELL is the story of the fall from grace of one of the most powerful men in television. Roger Ailes, as played by John Lithgow, made the successful political campaigns of Presidents and politicians around the world. As the creative force behind Fox News, he turned the station into the highest-rated cable news channel. His conservative views made him many enemies in politics and entertainment.

The storyline is simple. Gretchen Carlson, as played by Nicole Kidman, accuses Roger of demoting her because she refused his sexual advances. He pulls her off the highly-rated morning show “Fox and Friends” and gives her the low rated 2 pm slot where she is the solo host. She complained, and Roger fired her.

She hires a team of high-powered attorneys to prosecute her case. The movie extols the nobility of her cause as a victim of sexual harassment and minimizes the motive of revenge.

The movie follows the stories of her and two other women. Charlize Theron plays Megan Kelly, the rising superstar of the network, and Margot Robbie plays a third young, ambitious evangelical woman.

The movie opens with Megan Kelly preparing for the presidential debate with Donald Trump. She asks the first question about his views towards women. A controversy erupts and lands Megan in the center. Surprisingly, Roger sides with her over Trump. As the BOMBSHELL of Gretchen’s charges explodes across all of Fox’s competitors, Fox asks Megan Kelly to support Roger. She remains silent.

Finally, Megan decides to reveal that Roger attempted to kiss her three times ten years earlier. With the superstar confirming Roger’s behavior, Murdoch fires Roger. Good triumphs over evil. But, is that the whole story?

There is no doubt that Roger’s behavior is unacceptable. As his wife, Beth, as played by Connie Britton, says Roger’s conversation is “salty.” His language around the newsroom was often vulgar. As Christians, we do not condone any use of foul language or sexual harassment.

The movie portrays no ambiguity in Gretchen’s firing. As the executives sat around a table, they did not give her a reason. She assumes that it was because of her denial of Roger’s advances. But, there is another explanation that if the film explored it, it would have brought more depth to the characters.

Roger Ailes was able to separate what was best for the network from his sexual appetite. With Megan Kelly, she received no reprisal for rejecting his advances. On the contrary, Roger developed and promoted her. Roger saw a star in her. Her rejection of him played no role in preventing her rise. She had talent, and Roger respected that fact.

Gretchen Carlson, on the other hand, was aging on the air. Like it or not, television requires attractive young women. There was an experiment, not in the movie, where one host dyed her hair blond from brown, and her ratings went up. As a country, we can debate the importance of youthfulness of TV women. Men do not have the same aging problem on TV. Until attitudes in the general public change, we are stuck. Theologically women have a legitimate argument. Aging is a normal part of human life, and a woman is no less attractive as she ages.

Portraying a struggle with aging would have added depth to the character and sparked a debate. Instead, we are left only with sexual harassment by a conservative icon.

On “Fox and Friends,” Steve Doocey sat stage right and was the main anchor. He was calm and pleasant, just what the audience wanted to see when they woke up. Brian Kilmeade was stage left and added a light-hearted spirit to the show. In the center seat, sat Gretchen who supported both Steve and Brian. She was too aggressive in that spot. She wanted to change that role from supportive to starring. Roger had to move her for the good of the show.

He put her on the 2 pm show, not as punishment for rejecting his sexual banter, but to save her. Roger put Megan Kelly in that role before her. Everyone at Fox had to prove himself or herself. Megan did well and moved up to primetime. Even Bill O’Reilly started at 6 pm before moving to primetime. Gretchen did not see things that way. After all, she came from network TV, not lowly cable. The movie ignored any anger over being pushed out because of age. The producers did not explore revenge as a motive.

The third woman Kayla Pospisil is the most problematic. She was a mixture of many women, according to the producers. Combining many characters into one central role made the script less credible. She was a young, ambitious evangelical lesbian who wanted to star on Fox News. This character addition was a disservice to the movie and the audience. Portraying evangelicals as closet lesbians is a political slur of no value. It is the only brief sex scene in the movie. It was gratuitous and inserted for political propaganda. Gays and liberal democrats worked at Fox News. As long as they worked well, there were no repercussions.

Kayla’s case was the most clear cut sexual harassment. She was young and eager to succeed. Roger played on her aspirations. Unlike Megan, she did not say no. Also, Roger did not see in her the rising star that he saw in Megan. Raw ambition on her part led to disastrous consequences. Her story is a morality tale and a Faustian bargain. She traded sex for a promotion, but the advancement never came.

Megan’s admission to Roger’s attempted kiss was his downfall. She successfully negotiated that awkward encounter and could have supported Roger because he endorsed her and respected her.

It was her encounter with Kayla that changed her mind. She saw Kayla as a victim, and so she needed to speak up for all women. Kayla was contrite about submitting. The movie ends with Gretchen pleased with her $20 million settlement and having succeeded in her revenge.

The movie is exceptionally well-acted. The make-up made all the actors real. With Charlize’s portrayal, right down to the voice, you were not sure that it wasn’t the real Megan Kelly. John Lithgow matched the look and actions of Roger Ailes, but his voice sounds too educated for the street fighter in Roger.

The political hatred of Fox News is apparent but played down. The movie had a chance to explore the complicated feelings that lead to sexual harassment and to the temptation to submit. In this story, unlike the stories of other powerful TV men, the women alleged no physical force. Had Roger used physical strength, his fate would be worse than firing.

His death leaves behind a mixed legacy of success, intuition and sexual demons. This story is yet to be told.