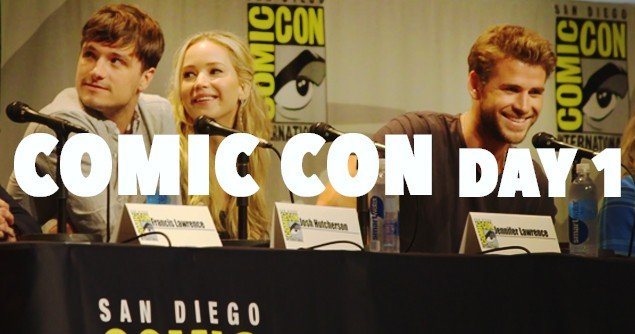 MOVIEGUIDE® is once again at Comic-Con for the fourth straight year. This year includes presentations from the new STAR WARS movie, the last HUNGER GAMES movie, BATMAN VERSUS SUPERMAN, and more. Even so, this year some of the major studio players, such as Marvel, Sony and Paramount have opted out of Comic Con 2015.

For the first day in Hall H, the largest room in the convention center, the second part of MOCKINGJAY, the last HUNGER GAMES movie, had a big presence. In fact, fan favorite Jennifer Lawrence was answering questions asked by Conan about her favorite part of filming all of the movies, and quite frankly she was perturbed. After a few minutes, she assured us that the part she likes would give away a lot about the next story.

The rest of the cast made comments about this being their last film together and the sadness that this entailed for them. The group is very close, even on a group text, constantly hanging out “at Liam’s (Hemsworth) house in Malibu, trying to get wine” says Lawrence.

Hemsworth said that over the years they were all “forced to grow up, and step up to the plate. . . setting a good example and being a good role model.” He added, “This will always be a really special time in my life,” and many of the other cast members agreed.

Another presence made was Bill Murray, who was funny and enjoyable. The crowd cheered when they heard the facts about his next movie, ROCK THE KASBAH. The movie is about a musician manager who finds a girl with a great voice. He thinks she could be a resurgence in his career and takes her to Afghanistan to entertain the troops.

One of the funniest moments during Murray’s appearance was when Jennifer Lawrence ran in to him behind the Hall H stage and later told MOVIEGUIDE®, “I was just so happy he KNEW who I was.”

One of the most inspiring moments in the day came when the producer of the HUNGER GAMES series, Nina Jacobson, told the press that MOCKNGJAY – PART 2 is about “The Pursuit of Truth.”

Of course, that’s one thing we’re all about at MOVIEGUIDE® too, the Pursuit of Truth.

Full DR. WHO Panel Below!