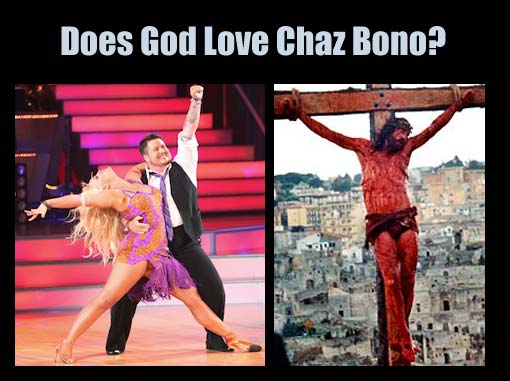 Many Christians continue to watch DANCING WITH THE STARS and are offended when told they should stop watching because Chaz Bono was selected as one of the dancers. They say, “God loves Chaz Bono.”

The reason to stop watching DANCING WITH THE STARS has nothing to do with how much God loves Chaz Bono. God does love Chaz Bono. He sent Jesus Christ to die for the forgiveness of mankind’s sins, including those of Chaz Bono.

The reason to turn off DANCING WITH THE STARS has more to do with the reason Chaz Bono was selected to be on the show. Chaz Bono’s celebrity status is based on “gender transition” and vocal gay advocacy – as well as her parent’s celebrity.

While God loves Chaz Bono, God does not love sin. The reason for having Chaz on the show is to present her “alternative lifestyle” as socially acceptable and even good.

The danger is that Christians content to say, “God loves Chaz,” will weaken in their resolve to love sinners and hate sin. The show’s producers want Christians to love Chaz and accept her silly, immoral behavior.

Homosexual advocates hate being considered sinners. Many truly believe they were born homosexual and cannot help themselves.

The truth is we are all born sinners and cannot help ourselves. We are naturally selfish, jealous, greedy, and lustful (in various ways). In the United States we try to teach children to share, to be kind, to be compassionate, and to be respectful. Tendencies toward homosexuality, like tendencies toward promiscuity or pedophilia, are sinful and should be discouraged, not encouraged.

As God clearly says in Leviticus 18:22-30, homosexual behavior is not only loathsome, it’s evil. That’s what the Hebrew language and its context in this passage actually means.

If our schools and our media succeed in convincing Christians it’s shameful to oppose behavior God calls evil, then we inevitably will wind up with more timid Christians and more unrepentant sinners.

The big lie is that it’s compassionate to accept homosexual behavior regardless of what God says. More than 600,000 Americans have died of AIDS. This number would have been much smaller had more children been raised to believe sodomy is shameful, loathsome, and evil.

God did not set the boundaries of righteousness and sin to make mankind miserable. Righteousness leads to healthy living, blessing, and prosperity. Sin leads to sickness, poverty, and despair as well as eternal darkness and punishment.

The producers of DANCING WITH THE STARS are taking a politically correct, evil stand against righteousness. By watching their show, you reward their stand. You improve their ratings and boost their income. You embolden others who want to move America’s media farther and farther from righteousness.

Movies and television are powerful tools for influencing culture. Do you want to live in a country where Christians are locked up for “hate crimes” if they mention what the Bible says about sin and evil? That’s the direction the liberal, left-wing, secular media is moving us.

You don’t have to stand on street corners speaking out. Speak with your television remote. Select only programming that encourages behavior that would lead to God’s blessing rather than his curse. The culture you leave your children and grandchildren is at stake.

Dietrich Bonhoeffer, another German minister imprisoned and executed by the National Socialists, but this time for being part of a plot to kill Hitler, said, “The ultimate test of a moral society is the kind of world that it leaves to its children.”

Watching this season’s shows of DANCING WITH THE STARS is sure to leave the world’s children with a more venal, more debased immoral society than ever before. The world, and the Church of Jesus Christ, is dying a terrible death by a million cuts, and the cuts are not pretty.

The question is, What are YOU going to do about it?