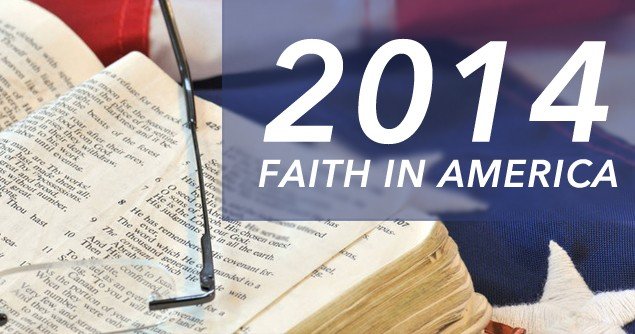 A Harris Interactive® Poll of 2,250 American adults on the Internet, taken Nov. 13-18, 2013, found that 74% of Americans believe in God and 68% believe Jesus is God and/or the Son of God, but these numbers have decreased since their high point four or five years ago.

By contrast, belief in Darwin’s theory of evolution, ghosts, reincarnation, UFOs, astrology, and witches seems to be increasing.

Of course, the historical reliability and truth of the Bible have been confirmed by more than 100 years of modern historical, scientific and textual research. For the evidence of this, please see our article “You Can Trust the Easter Story!” on the MOVIEGUIDE® website at https://www.movieguide.org/news-articles/you-can-trust-the-easter-story-2.html.

Regarding the Virgin Birth, however, a poll released Dec. 18, 2013 by Pew Research’s Religion & Public Life Project found that 73% of Americans said they believe in the Virgin Birth.

Another recent poll by Pew showed that the percentage of American Catholics who consider themselves “strong” members has declined to one of its lowest levels in 38 years, 27%. The opposite is true of American Protestants, 54% of whom consider their membership to be strong, twice that of Catholics.

A poll last year by Gallup also revealed that 86% of Americans still say they believe in God, a drop of only 1%.

Below is a chart on Gallup’s findings.

Religious Preference in the U.S.

The vast majority of Americans believe the Gospel of Jesus Christ, which says that Jesus is an historical figure and the Son of God who died for our sins and rose from the dead (1 Corinthians 15 of the New Testament documents):

** Americans Believe in the Virgin Birth

Most Americans believe in the biblical story of Jesus Christ’s birth, including that he was born of a virgin, according to a Pew Research Center poll in December.

Almost three quarters of Americans, 73%, believe in the Virgin Birth.

Two of three Americans, 64%, believe in the God of the Bible, a recent Rasmussen Poll found. Only 12% said they don’t believe in God at all.

** Americans Believe in the Bible

Three-quarters of Americans, 75%, believe the Bible is the actual Word of God or the inspired Word of God, according to a new Gallup Poll last year.

** Millennials and the Bible

A recent study of Millennials born between 1984 and 2002 reveals three “significant” insights:

For example, 96% of Christian Millennials believe the Bible is the actual or inspired Word of God and that it contains everything a person needs to know to live a meaningful life, though some of those do believe the Bible has “some factual or historical errors.”

In contrast to this, only 27% of Non-Christian Millennials say the Bible is the actual or inspired Word of God. Also, about 30% say the Bible is merely “a useful book of moral teachings,” while 19 percent say its an “outdated book with no relevance for today.” However, 62% say they have never read the Bible!

Finally, 81% of Millennials prefer to read the Bible in print, while 78% also say they like hearing it read aloud in church. Two-thirds, or 66%, however, admit they use the Internet to read Bible content.

The survey was conducted by the Barna Group in partnership with the American Bible Society and InterVarsity Christian Fellowship.

** Americans:  Religion Can Answer All or Most Problems

Most Americans, 57%, believe religion “can answer all or most of today’s problems,” according to a poll in 2014.

However, 30% say faith is “largely old fashioned and out of date,” a number that has increased 10 points in the past 20 years.

The poll was conducted last May by Gallup.

Of course, contrary to what the minority say, as President George Washington once observed, civilization and good government depend on religious faith and morality, particularly biblical faith and morality founded on the Christian faith.

The Bible is never out of date; it is timeless.