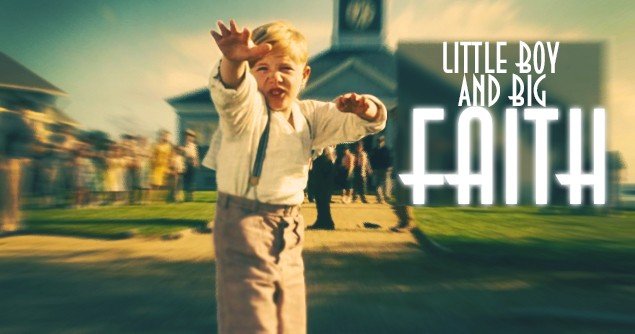 The movie LITTLE BOY is about faith. A little boy who dearly loves his father attempts to bring him home from World War II by exercising faith. It’s a very emotional story with many good points, but it fumbles the ball on the message of faith.

The little boy (regularly picked on by larger classmates) spends time with his father imagining heroic adventures in which the father asks, “Do you believe you can do this?” The little boy always responds, “Yes, I believe I can do this.”

The second kind of faith LITTLE BOY explores is magical faith. The little boy is called on stage to be the assistant of a magician he admires. The magician tricks the young man into believing he moved a bottle across a table by believing he could. The boy then learns from a priest that this was not real, but many people fall for magical and occult faith, hoping tricks and spells will get them what they want. Such “faith” is abominable to God. It’s misplaced faith.

The third kind of faith LITTLE BOY explores is faith in earned results. The little boy in the movie is given a list of good deeds to do to earn the return of his father from the war. This too is a valuable kind of faith. We want children to grow up believing that work is rewarded. The farmer who plants seeds and tends his garden has faith that he will harvest a crop as the result of his work. Even so, as powerful as it is, profit motive faith is still small.

LITTLE BOY came close, but fumbled, the most powerful form of faith:  faith in God. The movie had a priest tell the little hero about faith the size of a grain of mustard seed being capable of moving mountains from a verse in the Bible. The little boy even goes to a store and gets a mustard seed.

The problem is the little boy takes the attitude, “I can do this.” He repeatedly takes a stance the magician taught him as if he was casting a spell. When something remarkable happens, he’s told, “You did it.”

Big faith is not in what you can do, but in what God can do. God created the universe. God made the mountains. God sent his only begotten Son to die that we might be forgiven our sins and live as children of God. There is tremendous power in self-confidence and hard work, but these pale in comparison to the power of God.

Big faith is not in anything we can accomplish in our own strength; it’s in what God can accomplish when we surrender our lives to Him. It’s not a “you can do it” faith. It’s a “He can do it” faith. Big faith brings glory to God. The story of David and Goliath is a story of big faith. Did David slay Goliath? Yes. Could it be said, “You did it?” Certainly. But, the real message of the story is that God used David to slay Goliath. God used a little boy to show His power.

You have ability. You have talents. You can do big things. You can do much bigger things if you have faith in God and allow Him to use you.

You may have a computer or phone made because Steve Jobs believed he could change to world, but it would not exist had God not changed the world first. The freedom that enabled Steve Jobs to start Apple computers would not have existed had not God used followers of Jesus Christ to transform the Roman Empire.

Jesus Christ taught His followers to pray, “Thy kingdom come, thy will be done, on earth as it is in heaven.” This has not fully come to pass, but think about how you live now. Do you see people on the sides of the roads being crucified? Do you see children being fed to lions in sports stadiums? What you do see in America is more kindness and courtesy than cruelty and vulgarity. The United States is a nation where honesty and integrity are the norm and dishonesty and graft are opposed.

While the nightly news may report on all the murders and wrongdoing, they’re really not the norm. America is great because the average American prefers heaven on earth to hell on earth.

Big faith is to believe you can be used by God to make life on earth more like heaven.

America itself is in danger. It looks as if our culture is based less and less on the will of God and more and more on promotion of sexual promiscuity. Vulgarity and dishonesty are on the rise — especially on television.

We need big faith. We need to understand that on our own we can’t reverse our moral decline. The media, like a Goliath, taunts the church. Those who despise God’s Law are confident they’ll finish transforming America.

Goliath had confidence. He believed he could take on anyone and win. He saw David as some kind of joke.

God works in many ways. At times, He lets those who oppose Him have what they want. With it, they get the consequences:  a taste of hell on earth. On other occasions, He gives big faith to little people. He slays the giants.

What measure of faith do you have? Do you believe the Supreme Court will eventually remove “In God We Trust” from our currency? Will the Ten Commandments be chiseled off the walls of the Supreme Court? Will the United States abandon the pursuit of heaven on earth and expand its pursuit of sexual liberation or surrender to evildoers overseas? Will Goliath defeat God?

We need some big faith.