Do Movies Agree with What the Bible Says About Death? 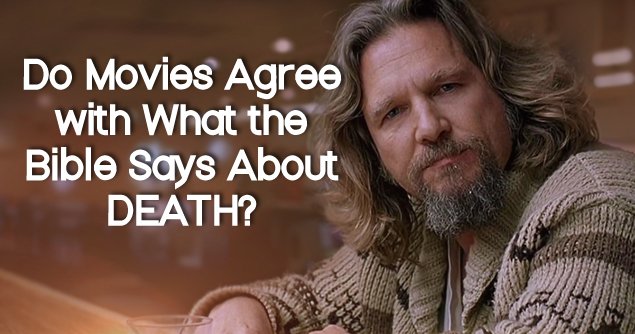 Contemporary movies are moving further away from a Christian, biblical concept of death and dying, toward concepts that neither respect the personhood nor have hope in the resurrection.

From THE BIG LEBOWSKI to THE BEST EXOTIC MARIGOLD HOTEL to HOW TO LIVE FOREVER to CHILDREN OF THE LIVING DEAD and the many other horror movies in this area, there’s been a growing promotion of anti-Christian practices such as cremation or embalmment.

In the following article, taken from his book Cremation, Embalmment, or Neither?: A Biblical/Christian Evaluation, the brilliant professor Alvin Schmidt, Ph.D. lists the many ways that these pagan practices deny faith in Jesus Christ, especially the biblical doctrine of our physical resurrection.

WHAT CHRISTIANS ARE NOT TAUGHT OR TOLD

My people are destroyed for lack of knowledge.

As noted in the preceding chapters, Christians from their earliest years in Rome and to the early eighteenth century maintained a consistent anticremation posture. So firm was the Christian opposition to cremation that church councils saw no need to issue canons that spoke against it. This is an amazing fact. But by the early eighteenth century the solidarity of Christianity’s rejection of cremation had clearly weakened. The church’s leaders apparently no longer taught or told Christians why their spiritual ancestors had rejected cremation. Thus, as noted earlier, in 1710 a Mrs. John Pratt in Ireland made the first breach in Christianity’s anticremation wall by having herself cremated. Christianity’s weakened position was further evident in that Pratt’s cremation brought no response from the church’s leaders. Nor did its leaders respond regarding some other cremations that occurred later (mid-1800s) in different parts in Europe. In both instances, the church’s leaders not only failed to respond, but they also failed to give Christians any historical and theological facts why Christians had always rejected cremation.

Facts Not Taught or Told about Cremation

In my contact with numerous Christians during the last decade, it has become obvious that today’s Christians know very little about Christianity’s centuries-old rejection of cremation and why Christians consistently took that stance. If today’s Christians knew these historical facts, not only would they be spiritually edified but also quite likely not opt to have themselves cremated when their time comes to meet their Maker. Thus, Christian teachers, pastors, priests, and theologians need to teach church members the following facts, and, by doing so, they would be performing a God-pleasing service. The following facts are abbreviated and culled from the book’s preceding chapters. They are not cited to indict the church’s leaders but to provide assistance to teachers, clergy, and theologians who do not support the current, increasing practice of cremation and who would appreciate having these facts available for teaching, counselling, and discussion.

1. The early Christians knew cremation was a pagan practice that underscored pagan values. It was thus one of several reasons why they rejected cremation.

2. They also rejected cremation because they desired to be buried as Christ had been buried.

3. In the early years of Christianity in Rome, Christians were sometimes persecuted by the pagan Romans for spurning cremation.

4. The early Christians execrated and condemned the Roman funeral pyres, a fact documented in the late second-century dialog known as Octavius, authored by the Christian lawyer Minucius Felix.

5. For centuries, Christian opposition to cremation was so pronounced that when pagans converted to Christianity, they were required to abandon and promise never to choose cremation. It was a condition of membership.

6. Not a single act of cremation in the Old Testament ever had God’s blessings.

7. Many cremations in the Old Testament often were the result of God’s wrath.

8. Most individuals in the Old Testament who were cremated had either violated God’s law(s) or had engaged in some criminal behavior.

9. God in the Old Testament did not tolerate cremation, not even those done by pagans, as indicated in Amos 2:1-2.

10. According to 1 Corinthians 3:16 and I Corinthians 6:19-20, St. Paul taught that every living Christian’s body was the temple of God’s Holy Spirit. That body, although now dead, Christians could not bring themselves to burning and destroying it as though it were mere waste material, an act they likely saw as sacrilegious.

11. Recent research shows cremation is contributing to the erroneous, pagan belief now held by many Christians who think only the soul survives after death, and that there will be no resurrection of the body.

12. Research also reveals cremation is contributing to the West’s denial of death, a phenomenon reinforced by no deceased body present at many cremation funerals of Christians.

13. Christians who opt for cremation unwittingly ignore St. Paul’s teaching in I Corinthians 8:13 that admonishes Christians not to spiritually offend other Christians by their given behavior.

14. The pagan Romans stopped cremating their deceased humans in the fourth century, largely the result of Christianity’s influence.  Thus, earth burial became the only acceptable way to dispose of the dead in the West and remained such for nearly two thousand years.

16. It was not until the mid-1800s that earth burial was formally questioned by organized groups in the West.  They also conducted some cremations in different parts of Europe.

17. Cremation with its ashes contradicts the biblical concept of death as “sleep,” taught in the Old Testament (Daniel 12:2) and in the New Testament (1 Thessalonians 4:13). Cremated ashes cannot be envisioned as being asleep.

18. The words “ashes to ashes” in the committal phrase “Earth to Earth, Ashes to Ashes, Dust to Dust,” often spoken at funerals, are not biblically derived.  The Bible never speaks about dead human bodies turning to ashes.  It only states that bodies will turn to dust (Genesis 3:19).

19. The early Christians replaced the Greek word necropolis (burial site of the dead) with the word koimeterion for Greek speakers and coemeterium for Latin speakers. Both words meant a temporary sleeping place.  Both words conveyed the Christian conviction that the dead in a graveyard are “asleep” awaiting their resurrection.

20. The English word cemetery, etymologically derived from the Latin coemeterium, is a theological concept.  Thus, every time people use the word cemetery, knowingly or unknowingly, they echo the Christian conviction that a cemetery is a place where the dead are temporarily “asleep.”

21. Cremation contradicts, even jettisons, numerous funeral hymns that speak about the deceased bodies sleeping in their graves, and thus many Christian hymns can no longer be logically sung at cremation funerals.

22. St. Paul in 1 Corinthians 15:44 says, by way of an analogy, that the deceased human body lying in a grave is like a planted seed in the soil, and on Resurrection Day it will rise like a new plant, the latter being a spiritual (glorified) body.  Cremation destroys this analogy, for a burned seed does not produce a new plant.

23. Today some Christians scatter the ashes of a cremated person, not realizing this practice was once done only with the ashes of cremated criminals in order to erase society’s memory of their evil acts.

24. Crematory operators do not scour the inside of the furnace after each body is cremated. Thus, the survivors of a cremated body invariably receive a small amount of ashes from a previous body, and similarly, a small amount of their loved one’s ashes are left behind that will become a part of the ashes of another cremated person.

25. Christians have always desired to be saved from the eternal flames of hell, a phenomenon noted by Jesus in Matthew 10:28.  Thus, many ask: “How can it be theologically acceptable to have deceased bodies of Christians destroyed by hell-like fire in cremation?”

Facts Not Taught or Told about Embalmment

As noted in chapter 12, Christians in North America have for more than a century accepted embalming of the dead without any serious theological evaluation, primarily because they do not know and have not been told what embalming a dead body involves.  The following facts are offered to help Christians understand this common mortuary custom.

1. There are only two cases of embalming (Jacob and Joseph) mentioned in the Bible, and neither has any biblical precedence or support.  The Bible does not indicate that Christians are to imitate the embalming of Jacob and Joseph.  Both embalming accounts are merely descriptive, not prescriptive.

2. Early in the life of the church, St. Antony (AD 251-356), founder of monasticism, directed Christians in Egypt not to embalm/mummify their deceased bodies.  He said the practice was unbiblical and contrary to what had been done with the deceased bodies of the prophets and patriarchs and also with the crucified body of Jesus Christ.

3. Although embalming today is somewhat less macabre than it was in ancient Egypt, it still desecrates the human body. For its organs are punctured in order to siphon all the blood, liquids, and gases from them.  These are considered waste material similar to other waste in society and flushed into the city’s sewage system, all done in order to make the dead body look good for public viewing.

4. Embalming involves the use of highly toxic, carcinogenic chemicals. Hence, government regulations require embalmers to wear respirators and full-body coverings when they are engaged in embalming.

5. When the average human body is embalmed, about two gallons of formaldehyde (a.k.a. formalin) are injected into the body to complete the embalming process.

6. Embalming fluids pollute the soil after the body in the casket decays in the grave.  In some instances it also pollutes the underground water supply.

7. Although not widely known by the public, embalming is not legally required in the United States and Canada.  Hence, there is no need for Christians to choose embalmment.

8. Contrary to a widely held myth, sometimes spread by funeral directors, embalming does not make it safer hygienically for the public to view a deceased body at a funeral.  Before the late 1800s, people viewed unembalmed bodies for centuries without any ill effects.

9. Reputable mortuaries honor requests not to embalm a deceased person’s body. These mortuaries keep the body refrigerated, and they also permit private viewing for relatives before burial.

11. Research shows that embalming contributes to our culture’s death-denial mentality.

12. There is no biblical support for embalming the dead.

13. The churches of Eastern Orthodoxy and Orthodox Jews do not approve of embalming for their deceased members.

Had Christian teachers, pastors, priests, and theologians made Christians in the past made aware of the above facts concerning cremation, they would likely not be contributing to the current, continuing rise of cremation rates, at least not to the same degree. All too often, well-meaning Christians, unknowingly influenced by their secular culture, do things out of ignorance.  Many Christians who today favor cremation are an example of such ignorance. They have not been taught or told that Christians for centuries opposed and rejected cremating the dead; nor have been taught or told why they did so.

Similarly, they have not been taught or told the historical, biblical, and theological reasons why their Christian ancestors and their descendants did not embalm their departed loved ones. The lack of this information has not been beneficial for biblically minded Christians.